For the first time in the modern era, the Melbourne Cup was made in Victoria. 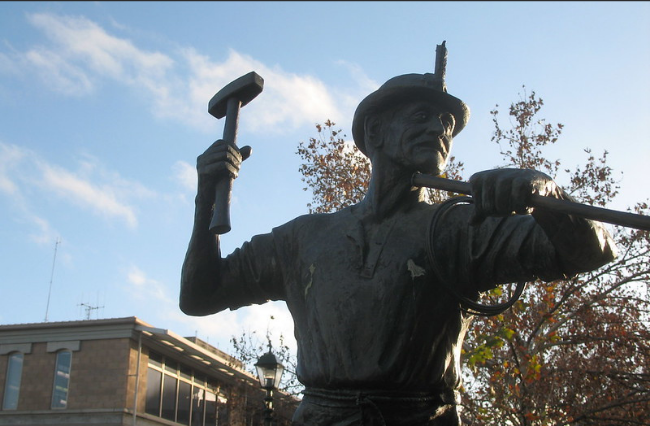 The 18-carat gold is refined to its purest form and rolled into sheets. The cup is shaped by turning the gold on a lathe whilst being careful to keep its softness to prevent cracking. Goldsmiths, spinners, miners and designers are all engaged in a process that takes around 250 hours and results in one of the most coveted, and historic sporting trophies the world has ever seen: the 2020 Melbourne Cup.

Fosterville Gold Mine is located roughly thirty minutes outside of Bendigo and has been since 2005. It is a small mine that struggles to get by. However, its fortunes have turned around recently, and it now makes more than two million dollars in profit every day. It seems little surprise then, that this Victorian mine that is one of the highest producers of gold in the world, would be selected for the creation of the most coveted trophy in horse racing.

What made this year’s Melbourne Cup especially unique, besides COVID-19 taking the punters from the racetrack, is that the trophy was the first in the modern era to be made from Victorian gold.

While many might not think about where the gold from the Melbourne Cup comes from, the towns attached to the mines take a great sense of pride from their local mine’s effort. Queensland town Mount Perry’s Mount Rawdon Gold Mine was the creator of the 2019 trophy which, according to Queensland Country Life, caused the town to be “bursting with pride”.

This is a feeling Bendigo can now also claim, with gold mining being a major industry in central Victoria. The benefits for the mine are wide-ranging and none are quite as positive as the public exposure that it  received with the ABC and The Australian covering the mine in feature stories, along with local news coverage and mining-related websites such as Gold Industry Group.

Trudi Jackson, the Community Advisor for Fosterville Gold Mine, believes the exposure has had a great impact.

“The mine is now seen as a place where we are able to generate jobs and keep people in these communities,” she told upstart.

“The gold is something tangible for people to see and so from that perspective it is really positive.”

Ashley Jackson, a senior resource geologist at the mine, claims that the exposure has also lifted the morale among the employees at the mine.

“A lot of them are punters and so they have a little bit of pride rub off on them due to the good feedback that they’re receiving,” he told upstart.

“There was definitely talk around the mine following the media exposure and it is really important because there isn’t a lot to celebrate this year which makes this even more special.”

Another outcome from the trophy being delivered out of Bendigo is the increased interest in gold mining. According to the ABC, the state government in Victoria had received more than 80 mining exploration licenses in the previous financial year. This comes as talks of a potential second gold rush have become louder, due to the increased production in central Victoria.

Trudi Jackson believes that the production of the cup returning back to Victoria is a product of the rejuvenated interest in mining exploration in Victoria.

“The gold coming from Victoria has great synergies with a lot of Victorians as the success that Fosterville has achieved has really reinvigorated gold mining, in particularly exploration,” she said.

“The Melbourne Cup was a great way of highlighting that and also bringing attention back to the history of Victoria as Melbourne, Bendigo and Ballarat were all built on gold.”

While the trophy came from the mine, citizens of Bendigo have claimed the cup as their own. This feeling may have stemmed from the fact that around six hundred of the 630 people who work at the mine are from Bendigo.

Trudi Jackson claims the boost will be immeasurable for the community.

“It will be fantastic. The cup really belongs to the people of Bendigo and it is something that everyone can celebrate so I think it was a really unifying event for the community when the cup came back,” she said.

The Melbourne Cup has just completed its 159th race, with plenty of highlights along the way. However, before the race that stops the nation began, the trophy travelled around Australia in the Melbourne Cup Tour and has done so for the previous 18 years. This year however, changes had to be made.

Joe McGrath has been the Melbourne Cup Tour Manager for every one of the 19 years and he admits there were some difficult challenges, but they found ways around them.

“We had to rethink how we did things, but the essence of the tour is storytelling, and that didn’t change, but we had to change how we delivered the storytelling,” he said.

“Because we couldn’t travel across the borders, when we virtually went to Kangaroo Island on Thursday, we accessed the 1950 Melbourne Cup which is in Adelaide and we took it there”.

McGrath concedes that while this year’s event wasn’t quite the same, the online version still provided a lot of purpose to many communities across Australia.

“When town organisers get their day with the cup, they involve everyone in the community and then all of a sudden people are talking about it in the town,” he said.

A case in point is Bendigo, as the community and the mine came together to share something that they are truly proud of.

“That’s the biggest benefit of the cup, when we leave the town, the community realises that they’ve united and that they’ve come together. That right there is the magic of the Melbourne Cup”

Article: Ben Hann is a first-year Bachelor of Media and Communications (Sports Journalism) student at La Trobe University. You can follow him on twitter @BenHann6

Photo: Bendigo Miner’s Statue by Tim Gillin available HERE and used under a Creative Commons Attribution. The image has not been modified.