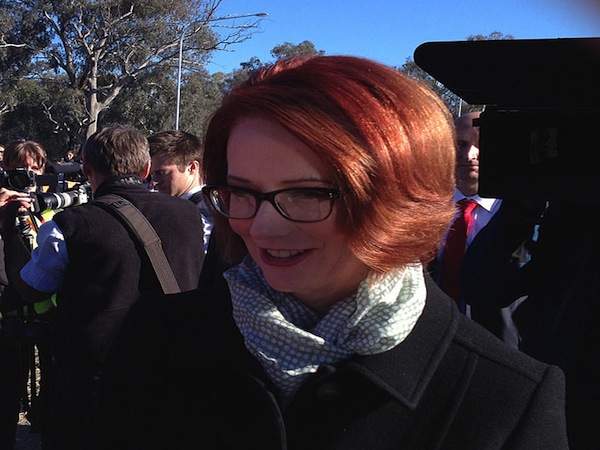 Reforms to education and disability care, and the NBN is what the Labor Party is taking to the next election. While a battle for leadership cannot be pinned to one policy, it seems that the now former Prime Minister’s lasting legacy will be her commitment to the education revolution.

Julia Gillard and the former Minister for School Education, Early Childhood and Youth, Peter Garrett have been spruiking the reforms that will see $15 billion being pumped into schools across the country. It is one of the last actions to make its way through both houses of Parliament before the rise for what is expected to be an arduous campaign.

As the dust settles in the Labor caucus room, Gillard’s time as leader will be marked by certain actions.

For some, she is the person that knifed Kevin Rudd, to others, the person that ignited the now-raging gender wars. But for some, Julia Gillard is the PM that brought about real education change.

Pressure has been put on Victoria to sign the government’s National Plan for School Improvement. State Premier Denis Napthine has said he won’t bend to the pressure, airing his concerns about funding:

While the School Improvement Plan has been the topic of discussion for Labor’s Question Time of late, there is another education move that has been less publicised. This one doesn’t focus on our domestic schools, but rather places emphasis on our nearest neighbours.

The Labor government is rolling out scholarships of between $7.2 million and $18 million to allow 3,600 students to undertake study in an Asian country.

The AsiaBound study program seeks to increase relations with Asia. A spokesperson for the now resigned Tertiary Education and Trade Minister, Craig Emerson, says that it is indicative of a growing trend: “Australian students are increasingly studying abroad, and increasingly choosing Asia to undertake this study. By encouraging and fostering this trend, Australia steps up its engagement with the region to which its future prosperity is tied.”

The Asian Century paper claimed that, by 2025, “Australia will be a more prosperous and resilient nation, fully part of the region and open to the world.” So, to do that, education is the first frontier.

The spokesperson said all our efforts need to be focused to the east: “Asia is regarded as the engine room for world economic growth in the 21st Century. In the past 20 years, China and India together have almost tripled their share of the global economy and increased their absolute economic size almost six times over. By 2025, the region as a whole will account for almost half the world’s output.”

While $18 million pales into insignificance when compared to $15 billion on the nation’s schools and a budget that is $19.4 billion in the red, this money will be well spent. It is an investment in students, and one that will one day pay dividends.

The AsiaBound study and the Gonski reforms are providing students with the opportunity to build Australia’s national and global presence – particularly our presence in the world’s economic powerhouses. Long after another occupies the seat of Lalor, long after the new cabinet is formed and long after the impending election, education will be what Gillard is remembered for.