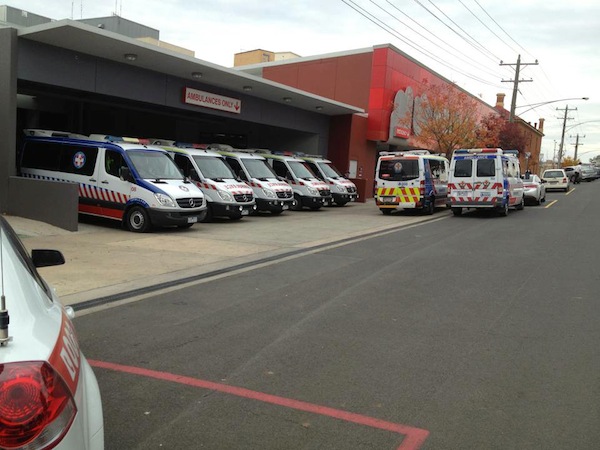 There have been claims that ambulance officers ignored the call of a dying woman, preferring to eat their lunch. Is it a case of hungry paramedics, or is there more to the story?

A phenomenon called ramping in fact lies at the heart of such delays, according to the paramedics. When a paramedic arrives at the hospital with a patient, they must remain there until they are able to hand him or her over.

“You can potentially be stuck looking after a patient for four or five hours or more at a hospital emergency department. Added to that time, the ambulance is not able to respond: so that’s one aspect of the misuse of resources that we’re concerned about, which haven’t been addressed by either the ambulance service or by the government,” says a Victorian paramedic who wishes to remain unnamed.

The state government’s budget, released earlier this month, shows a commitment to Victoria’s health services by allocating $151 million to the recruitment of 310 more paramedics and 30 ambulances. This is an addition to a pledge of $64 million to boost numbers in regional Victoria.

Code Red! Value our Ambos, is a petition which challenges the Premier to make some changes and highlights some of the concerns facing the Victorian paramedic industry. Their Facebook page shows cases of ramping across the state.

While the public may associate lengthy response times with lacking resources, the paramedic says it doesn’t stop there: “I think the extended response times doesn’t extend to a lack of resources – rather a misuse or mis-allocation of resources.

“It’s one thing that we as a profession feel is having a negative impact on our ability to responds,” the ambulance officer says. 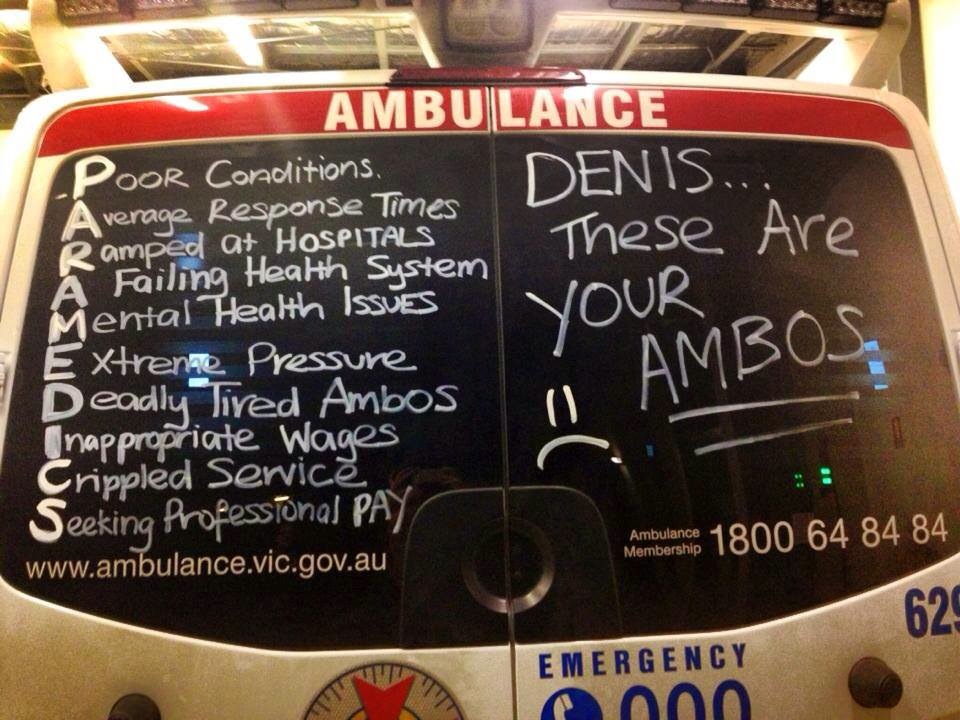 Premier Denis Napthine says that the issue of lengthy response times will be resolved as more paramedics take up a position with Ambulance Victoria: “As those ambulance officers and equipment rolls out, we would expect to gain improvements in ambulance response times.”

Steve McGhie, General Secretary of Ambulance Employees Association Victoria says that “obviously the population is growing and getting much older; and people are using the ambulance service more”.

But, for McGhie, the numbers don’t add up.

“You have a situation where the ambulance service doesn’t have enough staff to draw upon to fill all of their shifts. There’s a number of ambulances per day that are not staffed at all.

“There’s no shortage of graduates. There are probably more graduates than what there are positions. I think on average, Ambulance Victoria is employing between 200 and 250 per annum.  There’s probably between 600 and 700 graduates in the universities,” he says.

The paramedic contends that the problem extends beyond resources and manpower.

“The other thing is that we have a poor retention rate at the moment. We have a huge staff turn-over and as a result, we seem to have a workforce that lacks experience: the average age of employees is a lot younger, the average length of service is a lot shorter. If this profile continues, we’re going to find that Victorians have much less experience,” he says.

Anthony Carlyon, a manager at Ambulance Victoria says that there are various factors at play: “Response times are not the only measure of a quality ambulance service. We continue to see improvements in the more important measures of whether people live or die, and the quality of their life, for cardiac arrest, heart attack, stroke and head trauma patients.

“Ambulance Victoria is continuing to increase the number of paramedics and services that we are providing throughout Victoria as part of a $151 million state government commitment,” Carlyon adds.

While debate rages as to the latest Enterprise Bargaining Agreement between Ambulance Victoria and its paramedics, it seems that one thing is certain for ambos: they feel that the work they do does not equate to their salary.

“The government doesn’t value us – it doesn’t appear to value us and, obviously, appropriate remuneration to the training and the high quality of the workforce,” the paramedic says.

Despite a rejected pay increase, Ambulance Victoria is committed to bringing about a resolution.

“While the alternatives presented to achieve pay increases of up to six percent have not been accepted to date, we will continue to identify new options in a genuine attempt to bring negotiations to a conclusion,” says Carlyon.

Time is undoubtedly the driving element behind paramedical work – whether it be the time on the road, the time waiting at a hospital or the time before some real change.

The Victorian Department of Health was approached for comment.