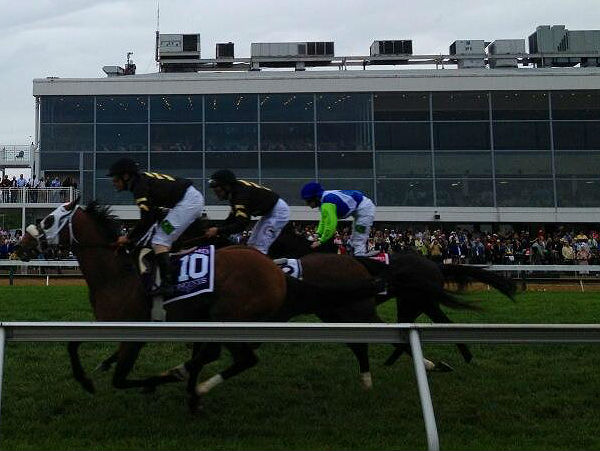 It’s no secret that Australians love a punt.

Our country has a reputation as the biggest gamblers in the world and our heavy gambling culture even includes a horse race that “stops the nation”.

But gambling has now infiltrated our sporting culture to the extent where the two are almost inseparable.

When the betting odds in AFL are mentioned almost as often as the score and an NRL stadium is named after a betting organisation, it’s clear that gambling advertising in sport is inescapable.

It begs the question; will kids be casualties in this bombardment of betting?

Tony Abbott announced yesterday that if elected in September, he will impose a ban on live betting odds during sports broadcasts. He said that unless the television industry acts first, the ban will be necessary to prevent children from learning about gambling at a young age.

Last week, the issue came under the spotlight when former Melbourne star David Schwarz accused the AFL of “grooming kids into gambling”.

“When my (eight-year-old) boy comes up to me and says ‘Richmond are favourites because they are $1.63,’ we’ve got issues,” he told Mike Sheahan on Open Mike.

“He should know they’re favourites because Jack Riewoldt is a bloody good forward,” said Schwarz.

By allowing betting agencies to interfere with the integrity of the game, the AFL and other sporting entities are exposing kids to a lesson on gambling ­– minus the message that it is rarely fruitful.

Current regulations prohibit gambling advertisements from airing during children’s viewing times, however, sport slips through as an exception to the rule.

Ubiquitous gambling magnate Tom Waterhouse is the face of betting in sport. During almost every broadcast, Waterhouse interrupts family viewing time to bring you this important message: gamble.

Earlier this year, Waterhouse made a multi-million-dollar deal with the NRL to buy his way onto Nine’s commentary desk. Fortunately, NRL executives saw reason, concluding that the bookmaker had blurred the lines between commentary and advertising. His role during live games was effectively reduced.

It seems that despite this ambiguity between sport and gambling, even industry figures have realised that there is a line and that Waterhouse crossed it.

Tom Waterhouse’s smug promise, “I know what punters want” also has to be questioned. Yes, he has enjoyed success with his online gambling business, but the overwhelming response from punters is that such advertisements interfere with their enjoyment of sport.

“The fans don’t like it,” says Australian Greens spokesperson for sport and gambling, Senator Richard Di Natale. “They want to see clubs disentangle themselves from gambling.”

The Greens recently introduced a bill to restrict the promotion of betting odds in sport. The bill proposes to negate the shortcomings of the latest agreement between the government and broadcasters, by outlining exactly when and what can be advertised.

A key objective of the bill is to close the loophole that allows for the corruption of children.

“The real concern is that we’ve created another generation of problem gamblers,” said Di Natale.

“We know from research that young kids who see these ads become more familiar with the brands involved,” he said.

Independent MP Andrew Wilkie has also launched a parliamentary inquiry into gambling reform.  A number of major industry stakeholders have lodged submissions, outlining their views on the advertising and promotion of gambling services in sport.

As expected, gaming corporations are adamant that no reform is needed. However, Tabcorp voiced their support for banning the broadcasting of odds on the MCG scoreboard. Perhaps a tactic to distract from the greater need to address television broadcasts, but a step forward nonetheless.

In its submission, the Victorian Responsible Gambling Foundation noted that “children under 11 tend to have difficulty distinguishing between advertising and program content”.

Di Natale believes that as a result, watching a game of footy has now become part of an interactive gambling experience.

“A young kid can watch a game of footy and be bombarded with betting odds and see a bookmaker that appears to be part of a commentary team,” he says.

Despite his desire to tackle the issue, Di Natale has concerns about Abbott’s plan, dubbing it a “smokescreen”.

The Australian quoted him as saying that “the government has tried Tony Abbott’s policy and it’s failed”.

Whichever plan succeeds, the decline of betting advertisements in sport will garner a positive impact. If stricter regulations are implemented we may be able to prevent kids from becoming collateral damage in the sporting community’s relentless strive for higher revenue.

But if we can’t agree on a solution, the gambling industry is sure to be booming under the next generation of Waterhouse bookmakers.