Sport accessibility has come a long way in Australia, but where can it improve? 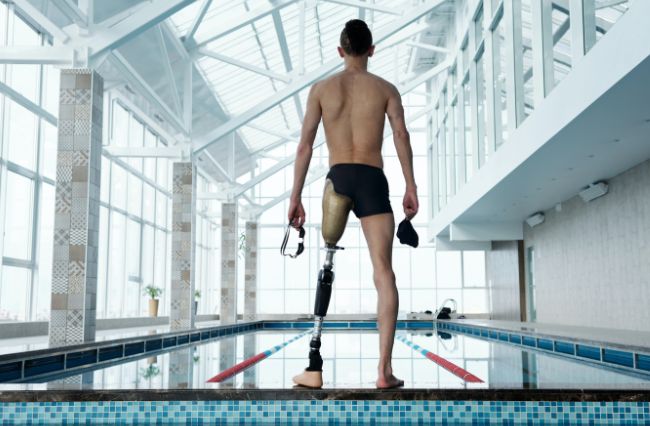 Growing up in the northern suburbs of Perth, Brad Brider was, as he refers to it, a sports “nuffy”. But, born with Fraser’s Syndrome, a rare genetic disorder that severely affects his eyes, lungs and other organs, Brider’s opportunities to play the sports that he loves were very limited.

The only sports accessible to Brider were goalball (a game played between two teams with the aim of rolling the ball into the opposing teams net) and cricket that were really available.

“If you’re growing up you had to choose between one of them and I’m half deaf,” he tells upstart. “So goalball you play with a blindfold on so it didn’t really work for me.”

These days, Brider, now 24, is vice-captain for Australia’s vision-impaired cricket team and a member of the Blind Sports WA board, and is aiming to make sports more accessible for everyone in the community. The board has implemented sports such as vision-impaired tennis, AFL, soccer, tandem cycling, bowls and bowling up and running in his home state of WA.

“Anything you’ve really put your mind to that you wanted to play, you could do it now,” he says.

And with new and greater opportunities for people to play disability sport, Brider believes that this will help people with disabilities to grow both socially and emotionally.

“You make friends and get with people and connect with [them] on a very deep level because they experience the same sort of discrimination and various things along those lines with you…you get to get that competitive side of you out which is also pretty limited.”

Darrel Sparke, from Amputees NSW, believes that the efforts of people such as Brider has improved not only the growth of sport accessibility in Australia but also re-shaped the public’s view of para-sport.

“The opportunity for individuals to excel and become elite [in the past] really was a very challenging and always unknown pathway. And the community really had a concept of sympathy rather than acceptance,” he tells upstart.

“Now we don’t stop and think that sport is all inclusive. It’s almost getting to the point where it’s implicit, and I think once upon a time it was never considered that way. It was considered exclusive.”

While sport is a great way to stay active and maintain physical fitness, exercise also releases chemicals such as endorphins and serotonin which can help an individual deal with issues such as stress, depression and anxiety. Sparke says the benefits received from competing and participating in sport proves just how important it is for it to be easily accessible to everyone.

“Participation in sport and exercise in general has a huge benefit for all people let alone people living with a disability or some other conditions. We know that it produces an excellent range of chemical responses in the body,” he says.

Australian paralympic swimmer and Commonwealth Games gold medallist Tim Hodge finds that swimming is a great way for him to reset his mind.

“I find that swimming for me can be a very helpful thing mentally. Just being able to jump in the pool, go for a swim helps me clear my head and helps me relax,” he tells upstart.

“I find that my perspective on things after a training session or something like that is usually a lot more positive than when I jumped in the water.”

Hodge was born missing a bone in the lower part of his right leg, and his parents made the tough decision to amputate his leg at a young age so he could get a proper fitting prosthetic. Understandably this took a toll on Hodge as he remembers after the amputation surgery saying to his parents, “I don’t think I’ll be good at anything, now that my foot’s gone”.

“They said, ‘don’t worry, we’ll put you in a whole range of sports. We’ll find you something you’re good at’, and true to their word, at one point I was doing a different sport every day of the week.”

Hodge is now looking towards the future, as he believes focusing on social participation rates will help people and will assist the growth of para-sports.

“I think we’ve got a lot of people out there with a disability who are either too shy or aren’t in a position that they’re able to participate in some of these sports. And I know that especially for people with more severe disabilities, it can be quite hard to get into sport,” he says.

“What I’d like to see is just probably mainly from the government more enabling of participation in sport.”

Sparke agrees that Australia should turn its attention to strengthening the availability of social sport for people with a disability.

“I think the next big stage for us is to see a massive growth in the social inclusion side,” he says.

“I think the next generation of participation will allow us to see growth and then not jump parallel as such, but really an integration through technology to allow able bodied and not able bodied or disabled individuals to compete side by side.”

Photo | ‘Man with Prosthetic Leg Standing by Swimming Pool’ by ShotPot is available HERE and is used under a Creative Commons license. The image has not been modified.

Author | Marcus Beeck is a second-year Bachelor of Media and Communication (Sports Journalism) student at La Trobe University. You can follow him on Twitter @beeck_marcus.