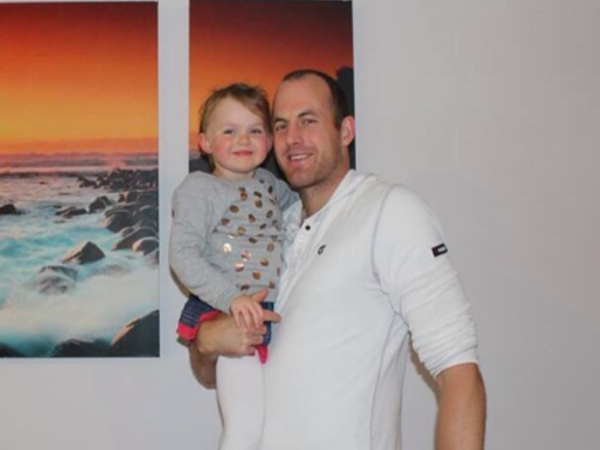 As approaching a quiet street in Pascoe Vale, a homey David Hale steps out of his house with one hand carrying out the recycling.

Attached to his other hand is his three-year-old daughter Mia. This little lady seems to have her father’s determination, answering his first interview question with an emphatic response around her recent birthday.

With one eye always out for his two daughters throughout our chat, you know fatherhood fits Hale perfectly.

“When you’re young and you get drafted, playing footy, that’s all you worry about. But when you grow older and have kids you realise footy is just a game, and you can come home to these two and they make you smile.”

“Still a little bit surreal, I suppose it hasn’t really sunk in yet.”

“When we go back to training for next year the win will probably sink in more, but yeah, you spend the whole time you’ve been playing footy to play on that day and obviously win. It was a very special moment for me,” Hale says.

A passion for sports seems to run through the blood of the entire Hale family. David’s father Ted played footy as a kid, but he injured his knee when he was just 15. His hopes of becoming a professional football player were gone. That familial-determination witnessed earlier saw Ted move onto a new sport. He represented Australia in the 1976 Olympics for rowing.

“My whole family have been really sporting involved, they have been a big motivation and influence on me.”

“And with Dad’s background in footy we sort of just got involved, I think I was about 6 or 7 when I got started playing footy, I just played with mates growing up,” says Hale.

Living in a house full of women isn’t new to Hale who grew up with three sisters.  Luckily though, he says ‘girly girls’ have never surrounded him.

“My sisters, they were never too girlie, they played footy as well.”

At 16, Hale played a year of senior footy on the Gold Coast before getting drafted to North Melbourne Football Club. He moved to Melbourne at 17 when he was signed up.

“It all went pretty quickly,” he says of his first year of senior football.

Playing sport was just a regular part of life for Hale.

“Initially you just start because of friends and family that play, and obviously you enjoy it. I played a lot of sports growing up, mainly footy, cricket and tennis.”

It was clear that football was his strongest passion and he was plucked from obscurity into the world of professional sports. This was a thrill for Hale, and hard work for him. He was very excited when he signed up “and then all the hard work kicks in”.

With his recent premiership title, this hard work has paid off.

After nine years playing at North Melbourne, Hale was ready for a switch.

It was on the Gold Coast Hale met his now wife Teresa.

“We have been together for a fairly long time, we met at school,” he says.

Teresa, like the rest of the women in the Hale’s family enjoys playing a little sport too.

“I try and beat Teresa in tennis every couple of years,” says Hale.

Quickly responding from the other side of the table is Teresa: “When was the last time we even played tennis?”  The playful banter is a source of amusement to the family.

After 12 years in the AFL, Hale has started preparing for life after football.

“I’m finishing a teaching degree at university. I’m trying to put assignments together at night time and we have one day off a week from training, so I try and go to my classes,” he says of his busy schedule as he looks ahead to his future.

While enthusiastic about his future as a teacher, Hale’s heart still lies in football.

But for now, Hale is enjoying some much-needed quality time with his wife and daughters, before training starts up again for Hawthorn on December 2nd and Hale looks forward to another year on the field.

Nina Burstal is a first year Bachelor of Arts student at La Trobe University. You can follow her on Twitter: @ninaburstal