Kandra believes he must give back to his community and help people whenever possible. 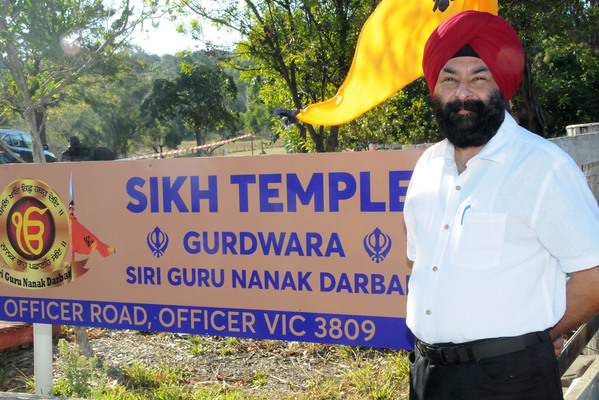 As the sun shines over the Australian native trees on Officer Road, Harpreet Singh Kandra smiles for the camera in front of a sign that reads “Sikh temple”.

In his white shirt, long black trousers, and classic red turban, he dresses as what he represents, the Sikh community. Born and raised in India, Kandra currently lives in the Cardinia Shire region, where he volunteers his time as a spokesperson for the Gurudwara Siri Guru Nanak Darbar Officer temple, otherwise known as Officer Gurudwara.

It’s not only a place of worship but a community centre, where people share meals and laughter. All the happiness and positive memories shared within the temple make it difficult for Kandra to believe it was almost never even going to exist.

In October 2017, the Sikh community proposed a plan to the Cardinia Shire Council attempting to set up the centre, but local residents filed a complaint, stating that they were uncomfortable with the proposed location of the temple because it was too close to their homes. The residents even took the matter to court with the Victorian Civil and Administrative Tribunal (VCAT).

“They did not understand the culture,” he tells upstart.

They never gave up.

In the six months before the VCAT meeting, which was scheduled for 4 May 2018, Kandra and his community fought hard to raise awareness about the Sikh culture. They began to share traditional Sikh vegetarian food with local residents to bridge the gap in understanding.

“As people became more aware of the Sikh faith, the Indian culture, the Sikh culture, they started understanding that they actually made a mistake by being a part of that VCAT matter and protesting the establishment of the Sikh temple.”

After seeking further legal advice, the residents were advised they had a low chance of winning the court case against the Sikh community, so they withdrew their complaints three weeks before the hearing.

Kandra describes the period after the complaints were dropped as a critical point for his community because attitudes began to shift towards their presence.

“Most people thought we were problem creators, but now, I’m very proud that most people in the region think we are problem solvers,” he says.

This community spirit remains to this day. During the pandemic, the Sikhs volunteered in blood donation drives and delivered thousands of food packages to Victorian families in the lockdown.  Kandra and his community also delivered groceries to local residents’ homes and handed out free recipe books explaining how to create the food that was given out on Australia Day. He says that this was a way for people to make use of their time, especially because cooking contributes positively to mental health.

“When I’m following a recipe and cooking constructively in the kitchen… I would actually be more productive, and I would start feeling better after cooking [the] food and enjoying my food,” he says.

Kandra’s ongoing commitment towards helping people was recognised in 2019 when he became the first immigrant to have received the Cardinia Shire Citizen of the Year award.

Sikhism is in Kandra’s blood. If there is one thing his beliefs have taught him, it’s to give back to the community and always offer to help people in need. His father, Kuldip, taught him that.

“My father told me and taught me that whatever we earned we need to share a part of our savings with the community for charitable purposes,” he says.

Not only is Kandra a dedicated spokesperson for the temple, but he also works as a civil engineer professor at Federation University Australia, based close to Ballarat.

It’s been 20 years since he started volunteering while balancing his career, but his journey has helped him recognise that helping others is in his nature. And the teachings do not stop in the classroom. Kandra’s six-year-old daughter Jazlyn is learning some Sikh values at home and will always think of others before doing something.

“It is a family gift that we have, it is an ancestral thing that is happening in my family,” he says.

Another extremely important aspect of his faith is protecting nature. The air, earth and water are the three elements of life and our lives come from them; the belief is that people need to respect the earth as they do their mothers.

Since opening the temple, Kandra has been actively involved in environmental conservation projects, such as the plantation drives, where six initiatives have been executed so far. He and his community have planted up to 200 trees at the centre, which has taken a considerable amount of time.

“We are planting some native trees, and the reason we wanted to plant native trees is that you don’t need to maintain them a lot and nature will fill them with water and nutrients,” he explains.

“We want to be the first Gurudwara in the world which will be carbon neutral, and there’s a lot of work to do before you get that,” he says.

When speaking about his work, Kandra uses the word “we” more often than “I”.

“When it comes to a community, I preferred to use the word ‘we’ other than ‘I’ because a big cause, like the community, cannot be done by a single person and one of the core founding principles of these strength of these communities is ‘we’ rather than ‘I’,” he says.

He frequently notes that he is proud of his community and that success was never achieved alone and shares his gratitude towards his second home.

“So how blessed we are to be in Australia. So, if we think we are blessed, then there’s a good reason for us to share our blessings with others.”

Grace Loke Tze Tan is a second year Bachelor of Arts (Linguistics and Chinese Studies) student at La Trobe University. You can follow her on Twitter @grace_tze