With the recent online momentum of the Black Lives Matter movement, it seems the political cause has become an online trend. 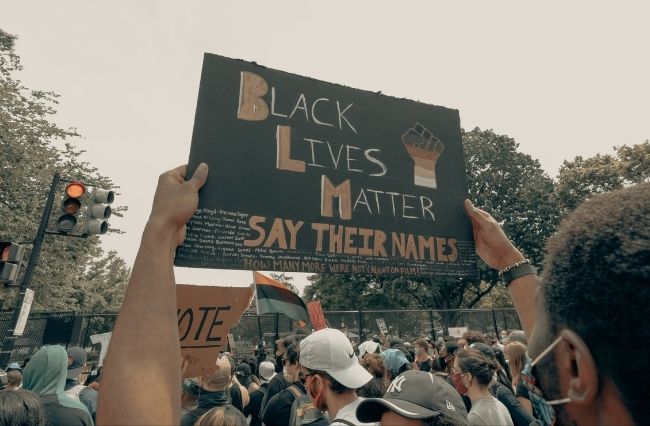 Following the public killing of George Floyd by Minnesota police, millions across the world took to the streets to raise awareness of racial disparities made clear by acts of unjustified police brutality. As governments tightened restrictions, social media became a key site for activism.

On #Blackouttuesday, black squares flooded social media homepages. The online campaign that was initially intended to illuminate the disenfranchisement of black employees in the music industry quickly garnered momentum.

Inadvertently, the hashtag rapidly became a trend of sorts.

A lack of online support was soon associated with an explicit rejection to participate in the political cause. At the same time, many brands were also questioned for not posting anything about the issue other than the black squares.

David Johns, executive director of US civil rights group National Black Justice Coalition, was one of many who took to Twitter to urge people to find better ways to help the cause.

“Anyone who is seeking to simply repost pictures of people who have died, or jump on the bandwagon of what they might see as a form of activism, should just not,” he wrote.

Despite many brands expressing genuine support for the cause, many were accused of “performative activism”, the act of participating in social issues to gain social standing rather than truly reflecting someone’s true devotion to a cause. Brands who used the BLM hashtag were criticised, saying it was merely a superficial act to avoid being shamed.

Professor Timothy Minchin, who specialises in race and labour relations in the United States believes brands’ main focus in these instances is to make money.

“It’s about sustaining attention. This is in the news now but for these brands in a year’s time or in two years’ time, are they still going to be there? I feel like they’re jumping on the bandwagon to some extent,” Minchin told upstart.

“It’s about how much real change is there going to be. It’s okay to say you agree with it or express support but they need to follow up with some concrete actions,” he said.

Meanwhile, many have noticed that support seems to stop at the brand’s front doors, their boardrooms blatantly contradicting their calls for diversity in their Instagram posts. For example, in Australia, on the AXS300, 5 percent of board directors are from non-Anglo-Celtic cultural backgrounds.

According to Pr Minchin, performative activism undermines the original intentions of the political campaign, and fails to address the deeply rooted flaws in the corporate industries.

“In history, advertisement has been so white-dominated. It’s only quite recently that I’ve seen African-Americans featured in commercials that are actually for the mainstream,” he said.

“I feel like there’s probably a fear from some of these corporations to feature African-American consumers that they might alienate whites.”

The issue of brands trivialising such social issues runs deeper than attention-seeking. Especially in the fashion and cosmetics industry, where hypocrisy can be identified in the lack of representation in businesses who purport to be “woke” or embrace diversity.

South Sudanese fashion designer Adhieu Kuir has been involved in Australia’s fashion scene, both on and off the runway, since high school, where she was first recognised at the Fashion Awards Australia finals.

Kuir has seen this first-hand and says that brands shouldn’t expect to be taken seriously when their track record says the opposite of what they’re advocating.

“Brands say they care about being more diverse but only now are they opening up and reaching out to black people,” Kuir told upstart.

“I don’t believe it’s genuine for most brands, because they would’ve done it ages ago if that’s the direction they wanted to lead.”

The importance of representation has been a point of contention for years, particularly when it comes to tokenistic representation. Kuir says she’s seen this play out in her short-lived experiences in modelling and retail.

“For me, it’s been so difficult to find jobs in the industry and I don’t believe it’s just because of my [lack of] experiences,” she said.

“The fact that they’ll be hiring black people now just feels like they’re trying to send a message that they’ve never cared to say before.”

With society’s expectations shifting, corporate participation in social issues is still quite a new occurrence. And with the intensity of current political movements, more millennials and Gen Zs expect brands to utilise their social media accounts to reinforce sincere and lasting sentiments.

Despite the criticisms of social media’s superficiality, Pr Minchin believes that it’s an essential tool to bring about real change.

“It is remarkable really, how this social movement was able to change things and achieve a remarkable amount,” he said.

“Social media is faster, it holds the importance of visual image. That’s what really moves people.”

Achol Arok is a second-year Bachelor of Media and Communications (Journalism) student at La Trobe University. You can follow her on Twitter @AcholArok

Photo: Man holds up a sign at the Black Lives Matter protest in Washington DC by Clay Banks available here and used under a Creative Commons Attribution. The image has not been modified.