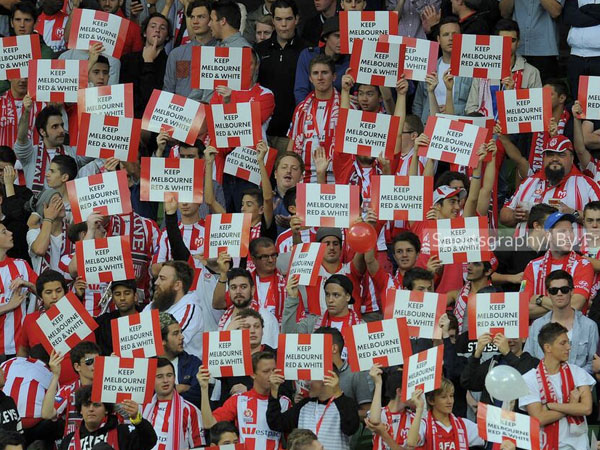 There was perhaps a hint of irony last weekend, as the daylight dimmed on Melbourne Heart’s final game of the season against the Western Sydney Wanderers at AAMI Park.

The one constant criticism of Melbourne Heart had always been that the club lacked a distinct identity that separated it from its derby rivals, Melbourne Victory. But when the final whistle had blown on a Saturday afternoon that could mark the end of Melbourne Heart’s existence in its current form, it was the club’s identity and its most visual identifier, the club’s colours, that most Heart supporters were urging not to lose.

Dotted around the 10,000-strong crowd were 2,500 placards that read: “Keep Melbourne Red & White”, imploring the new Manchester City owners to not change the club’s colours to sky blue. 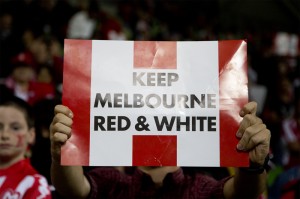 Having met with City officials this week, Melbourne Heart Supporter Association president and one of the organisers of the “Keep Melbourne Red & White” campaign, Cameron Osterlund, said the campaign had been received positively from the City Group.

“The respect shown by the supporters with the message was really appreciated,” Osterlund tells upstart.

“They were really happy with the way we went about it and the outcome.”

But if reports are correct that plans have already been submitted to the FFA by the City Football Group to change the club’s home kit to sky blue, along with a new logo and name change to Melbourne City, then the fan message may have already lost out.

“I can’t say outright that no I won’t follow the club,” he says.

Although Osterlund doesn’t believe a total colour change will occur, he does admit that a full rebrand would dampen his passion for the club.

“I certainly know that the passion I have now will be affected, to what extent I don’t know. I make the assumption it will be significant, because when you change the colours of the club, that won’t be the first thing they change, it’ll be last on the list of a fair few other things,” he says.

MUST READ: A blog post by one of the most passionate Heart fans explaining why this campaign is so important! http://t.co/lOdayatedB

It’s the philosophical paradox that a lot of Heart supporters find themselves grappling with. While most are grateful for the investment made by the City Group, just how much of the club can be changed before it ceases to be the same club that many fell in love with?

Since the January takeover, Osterlund has been collating information on what matters most to supporters about the club’s identity and has been relaying it back to the club.

“99 per cent of the people that I’ve spoken too, heard from, whatever, no matter what they’ve said, they’ve all said Melbourne Heart is red and white,” he says.

Some have argued that the colour change should not be such a huge issue for such a young club without much history, but Gabi Boyd, who was also involved in the campaign and plays the trumpet in the supporter group Yarraside, is adamant that Melbourne Heart’s four-year history shouldn’t be disregarded.

“That’s true, we’re not old, but how can you build history if you’re constantly building from scratch?” she questions.

“And to disregard the past four years that we’ve had is to devalue the hours of support and passion that I, and countless of my friends, have poured into this club.”

Melbourne Heart did deliver some of the poorest performances of any A-League club, but it wasn’t an abject failure. The club remained profitable across a league that lost a combined total of $20 million last season, its development of youth was excellent and while the club’s fan base was small, when outliers like derby crowds are removed, there was a gradual rise in crowds from 6,059 in 2010/11, to 7,225 in 2013/14.

What the club lacked is investment and, most importantly, results on the field. Whilst Manchester City may provide that, Boyd is adamant that it won’t mean as much.

“What’s the point of a new club that will maybe bring success, when they haven’t earned that success?” Boyd asks

“Melbourne Heart, right now, we have damn well earned some good times. We’ve gone through so much angst and sadness and just really tough times as fans and as a club and we deserve for some good things to start happening to us.

“If you wipe the slate clean and start again, you just have Melbourne Heart who were just crap. Now you have this team who plays in blue who’ll win some stuff. But it doesn’t mean anything to us, it doesn’t mean as much.”

If passions might die with a complete rebrand, then the FFA must take note. Take away the sentimentality and romance from the game and all you’ll have is a bunch of people kicking a ball around and no-one watching.

Melbourne Heart needs a breath of fresh air, but not a hurricane that will destroy everything that the fans love about the club. As Boyd explains, the colours are what unite fans, it’s what they sing about, it’s the most visual identifier and link that the club they follow is still the same.

But is there any point in campaigning to keep something, when it already might be a fait accompli?

“I don’t care who the person is,” Osterlund says.

“I don’t care if it is the richest man on the planet, I’ll fight as much as I can to ensure that at the very least, he listens. And that’s all that I ask, that he listens.”