Girls in Parliament 2018 is a demand for women to be taken seriously, and to have equal opportunity in political responsibilities. 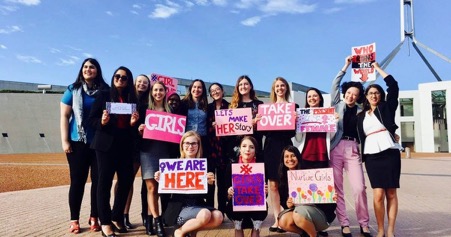 Streeter believes there is a barrier preventing an equal number of women and men in parliament.

She aims to overcome this with her program, which gives young women an opportunity to get into politics.

The girls are partnered with a political representative so they can “take over” some of the responsibilities of the politician. This could involve giving a speech, attending events or speaking at press conferences.

Streeter believes that females will not have a voice of opinion if there are fewer women represented in parliament.

“You cannot be what you cannot see,” Streeter told Upstart.

“We do deserve to be represented by people who reflect us, and we know that the more women we have in our politics, the more likely other women are to run for office.”

Sprague discovered her desire to participate in political discussion through involving herself in the La Trobe University group Labor Left, as it represents her values of feminism and democracy.

She believes voicing her opinions will do more justice than staying silent, and that women need to know about the political situations that might impact them.

“At the end of the day politics affects us no matter what – if we’re interested in it or not,” she said.

“We belong in that discussion just as much as any man.”
Sprague says her political ambitions have been ridiculed by men in the past.

“I’ve fought for the discussion of sexual assault for it only to be blocked and blocked,” she said.

“I’ve had men tell me my opinions around safe and accessible abortion is wrong.

“I’ve been told by men that I’ll never get anywhere and that I’m worthless.”

The Listening Tour Community Report conducted by the Australian Human Rights Commission revealed that female legislators are three times as likely to worry about gender discrimination, and twice as likely to fear not being taken seriously.

Streeter suggests that this could be due to unfair, sexist attitudes in the media, discouraging females from involving themselves in politics.

“[The media] goes through female personal lives in a way it doesn’t do for men, it picks apart their appearances and it’s largely misogynistic,” she said.

“I hope we learn to have this conversation in a fair and equitable way that judges people in a non-biased way,” she said.

To ensure equal opportunity within politics, Streeter believes the media’s opinion and marketing strategies need to be reviewed.

“I believe it would be helpful to remove sexist marketing, as we’re commonly inundated with pictures of women’s bodies in a way that reinforces that they’re public property free to be commented on – they’re not.”

Last year, Plan International Australia released a report which collected survey responses from young women and men across the country.

It measured attitudes towards gender and politics and cited lack of opportunity as the most significant issue.

“Girls Takeover Parliament aims to create that opportunity, to show young women that they are capable and competent,” she says.

“It also aims to start a conversation around the position and lack of women – particularly young women – in our political system.

“After all, while we have some women, the voices of young women are almost entirely absent.

“Ultimately, we want to see more young and diverse women running for office, so they can make the changes they know we need to see based on their experiences.”

Girls Takeover Parliament is a yearly run campaign from the months of September to October, and runs in conjunction with International Day of the Girl Child on October 11.

To find out more or to get involved, please visit https://www.jasiri.org.au/takeover-parliament-online-portal

Photo by Ashleigh Streeter for Upstart.

Sarah Ramantanis is a third-year Bachelor of Media and Communications (Journalism) student at La Trobe University.
You can follow her on twitter @sarahramantanis