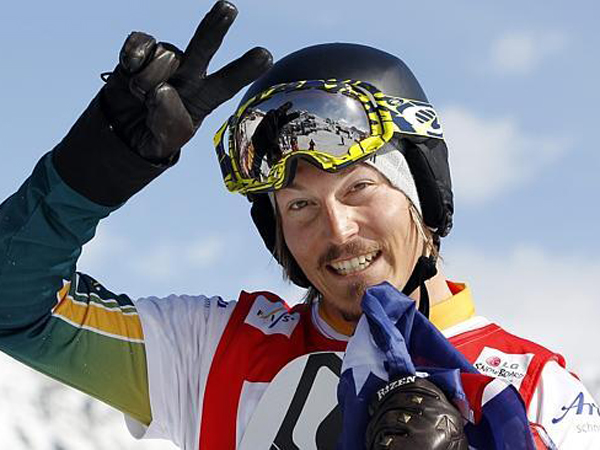 When you have a nickname like ‘Chumpy’, you don’t need a last name. You don’t even need a first name. People just know who you are.

“Well, the secret is that Alex is actually my nickname and Chumpy is my real name,” Alex ‘Chumpy’ Pullin laughs.

The well-spoken 26-year-old rocketed to fame after being named as the flag bearer for the Australian Winter Olympic team. While his charm and charisma have won over the media only in recent weeks (he has even been dubbed as the ‘pin up boy’ for Australia’s Winter Olympic team), his hometown of Mansfield has been following his journey from the beginning.

In 2007, Mansfield residents held a fundraiser for Chumpy, sending him on his way to his first World Cup series. Fast forward seven years and the now two-time snowboard-cross World Champion has been hailed by many as the one to beat in Sochi. And locals, in typical country style fashion, are still throwing their support behind the chilled out boy who used to serve them at the local ski hire.

When the parents of fellow local skier and Winter Olympian Anton Grimus hopped on a plane last week to go and watch their son compete, they were loaded up with 20 metres of bunting on which Mansfield residents had written good luck messages to both Anton and Chumpy.

It’s not the first time the small town of Mansfield has pulled out all stops to show their unconditional encouragement of a local’s achievements.

A similar thing happened last year when Simon Gerrans was leading the Tour de France, following on from his stage 3 win. Overnight the town was transformed in to a Simon Gerrans fan club mecca with homemade signs plastered all over the main street, pledging support for the born and bred Mansfield-ian.

“It’s one of those places that’s really unique. When we have conversations between ourselves and other crew on the tour from all around the world, it’s a really easy place to describe because I just love it so much,” Chumpy says of his hometown.

“It’s really cool to have so many people come up and get involved in what I’m doing. I’m really elated to feel that they are all enjoying what I do so much and the fact is, is that I love sharing it with the Mansfield community.”

It may not be the Iten of Kenya, or the Trøndelag of Norway, but there is little doubt that the small town of Mansfield boasts some pretty impressive sporting credentials, even beyond that of Chumpy. And unlike Iten and Trøndelag, the successes aren’t confined to a particular sport but are instead sprawled across a hugely varied list.

In recent times, the town has seen four clay target shooters selected for Olympic Games, Commonwealth Games or World Championship teams, three footballers who have played at an AFL level on a regular basis, two Winter Olympians, one track athlete who has represented Australia at the Commonwealth Games, Olympic Games and World Cross Country Championships and one world class cyclist.

While facilities are generally good for a country town, they are by no means world class or even comparable to those in the larger cities. Perhaps it is the unassuming nature of a small country town that plays a part in such success. Sure, notable world-class achievements are written about in the local newspaper. Yet on the same page, the Mansfield cricket club’s weekly report is given just as much airtime. They are our hometown heroes, but not more so than anyone else.

“The community is proud of their achievements and show a lot of support to kids growing up in their sport – it doesn’t matter who you are or what level you are competing at,” says Nick Kirley who came fourth at the 2010 Commonwealth Games in clay target shooting.

The importance of giving back to their community is also not lost on the athletes, something that is undoubtedly a huge factor in motivating a younger generation of sports stars. Last year Josh Fraser (Ex Collingwood and Gold Coast Suns ruckman) returned to his junior club as an assistant coach. Victoria Mitchell (3000m steeplechase runner) has conducted running clinics at the town oval while locals think nothing of it when world class shooters turn up to help out at the local monthly competition.

“Mansfield is a great community and sport is lived, loved and embraced there. It is also a beautiful area to get outdoors and be active. I think all those factors combined make for a winning start to any young athlete aspiring to reach the highest level,” Mitchell says.

And while they might all be travelling for 11 months of the year, challenging some of the greatest athletes in the world, they all have one thing in common. They come from Mansfield, a town with one main street, where everyone knows everyone. And for that one month when they do come home, they aren’t the World Champion or the leader of the Tour de France. They are the student you used to teach, the boy you used to coach, or simply just someone’s son.

When Chumpy stands on that start line tonight, there will be a town of 4,000 people cheering him on, riding every single bump on the edge of their seats with him. Not just because he seems like a cool dude, but because he used to serve us at the local ski hire. Because he used to go to our school and because if we don’t know him personally, we know his dad, his mum or his sister Emma. And above everything else, because like us, he is from Mansfield.

Simone McInnes is a third year Sports Journalism/Psychology student at La Trobe University (who obviously comes from Mansfield!). You can follow her on Twitter at @McSimone.