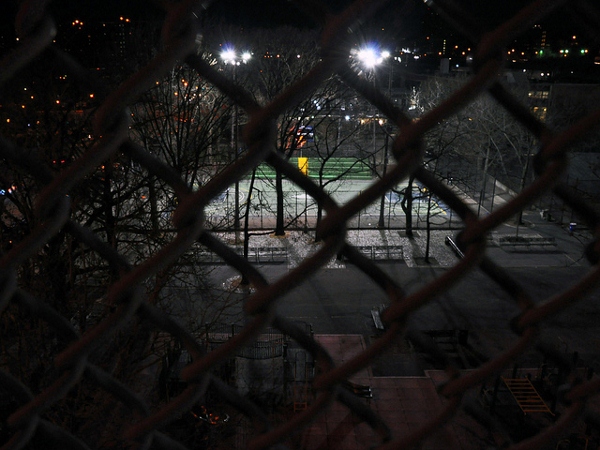 “I’m slamming suckaz like Shaquille,
S*** is real,
When it’s time to eat a meal,
I rob and steal.”
“Gimme The Loot,” The Notorious BIG

By the time Christopher Wallace released his influential album Ready To Die in 1994, basketball and hip-hop had already become intertwined to the point where they were almost inseparable.

It started almost a decade earlier when Kurtis Blow, DJ Kool Herc, and Big Daddy Kane, played important roles in the creation of the east coast hip-hop movement – something that would seamlessly combine with the rising popularity of basketball on a global stage.

The aforementioned lyric encompasses the arguably negative connection between the two cultures. Hip-hop was, and to a large degree still is, a braggadocios account of the hood life – often glamourising the negative elements that came with it.

Hip-hop wasn’t inclusive, politically correct or often even societally acceptable. While not being able to mirror it exactly, elements visibly bled into basketball, as the two seemed a companion to each other.

From hip-hop’s top down seemingly every act has donned an NBA jersey – although, not once you’re 30-plus.

In reality, they aren’t the same thing obviously, but they’re almost identical twins. In the mid-80s, both were in their proverbial diapers.

The 90s were the outwardly aggressive, oft-naïve teenage years, and now we’re starting to see them grow up to a degree.

With that in mind, it isn’t a surprise that both realms have taken steps in the past 12 months to move toward embracing homosexuality amidst the ranks, a drastic change in their both collective and dual histories.

Jason Collins’s historic coming out on Tuesday was rightly celebrated by most upon announcement.

Proud of @jasoncollins34. Don't suffocate who u r because of the ignorance of others #courage #support #mambaarmystandup #BYOU

Collins became the first active athlete in one of the four major sport leagues (NBA, NFL, MLB and NHL) to come out, an act that will ideally be a stepping-stone towards universal acceptance.

A year ago this week, Frank Ocean, one of the hottest hip-hop performers at present, outed himself before the release of his debut album, channel ORANGE.

Ocean, in an online letter released on his Tumblr account, said his first love was a man.

Again, his announcement was met by support from most in the hip-hop community.

However, neither decision has been totally accepted, showing that there is certainly still a way to go.

Kobe Bryant, despite being supportive of Collins and having taken a fan to task over using homophobic terms as insults on Twitter, was fined $100,000 for calling a referee a “faggot.”

Chris Brown famously made homophobic slurs, and Kanye West’s decision to wear a skirt during the Watch the Throne tour was criticised for bringing homosexuality into hip-hop. (Note: video contains language that some may find offensive)

Snoop Dogg Lion, recently doubted whether homosexuality will ever be completely accepted in rap music.

Snoop’s quote perfectly captured the challenges that the sporting world, and the hip-hop industry still face, despite recent advances.

In both über-masculine industries, homosexuality is still seen as a flaw, or in the worst case, a weakness.

As long as terms like “faggot”, “homo”, and “sweet” are still used in a derogatory fashion on the court or in the recording studio, there’s still a long way to go.

Right now, this is the half-time adjustment.

Changes are being made, but there’s still plenty of court left to cover, before the acceptance of homosexuality in the blurred culture of hip-hop and basketball is a slam-dunk.