I’d never ridden a horse before – the closest I ever got was sitting on top of one in kindergarten for a nice snapshot– so the prospect of going on a three-hour ride at Uncle Nev’s Trail Rides was endearing.

About 50 minutes north of Melbourne, the stable is located on Wallan-Whittlesea Road in Upper Plenty, an area of picturesque countryside. The drive presented gorgeous views as the built-up suburbs gradually rolled into green paddocks and hillside. The clear, sunny sky was simply a bonus.

The fact that this would be my first time riding didn’t bother me at all. Not until I arrived at Uncle Nev’s. Thankfully I wasn’t alone—the great thing about the stable is that it caters for beginners through to the elite, so there was a crowd of us. I definitely fell into the former category. The age group was quite diverse, too—adults and families to teenagers and uni students. 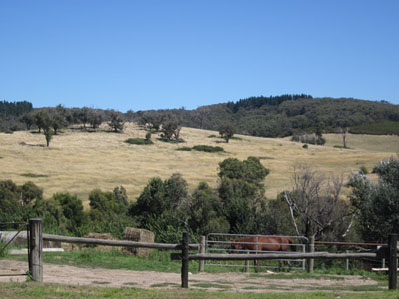 In a similar scenario, we were paired with a horse that would be most appropriate for us. In my situation, it would need to be sturdy, calm, patient and loving.

One by one, the others were joined with their noble steeds. And as the queue shortened, my nerves heightened. What was I thinking?

‘You’re here alone. You’ve never ridden a horse. You should just wave, say thank you and be back on your merry way.’

That was when I met Skippy.

Not the largest of the horses (a detail much to my satisfaction), I was helped aboard my shiny bay companion while told that he was ideal for beginners. Fighting back that nervous angst of mine, I managed to pay attention to how I should control Skippy, especially when he started to trot faster. Trot? My primary concern was making him walk without throwing me off.

As we waited for all the riders to mount their horses, a comment from beyond snapped me back to reality: ‘Oh, we’ll have to watch Skippy. He’s a biter.’

Great! What happened to calm, patient and loving? But it was time to put that aside and start on the trail.

As everyone ahead of me seemed to walk gracefully along, Skippy ambled awkwardly under my control—it felt a little bit like driving a car for the first time and slamming on the brakes rather than gently slowing down. After some practice my worries subsided and the trail turned into a magnificent – albeit bumpy – journey along narrow dirt paths and steep hills. It was enlightening to move with these clever animals and absorb their environments—the fresh, clean air and the absence of city noises, replaced only by the sound of clip-clopping, wildlife, ‘giddy-ups’ and the occasional snorting. The views and scenery along the way were breathtaking. 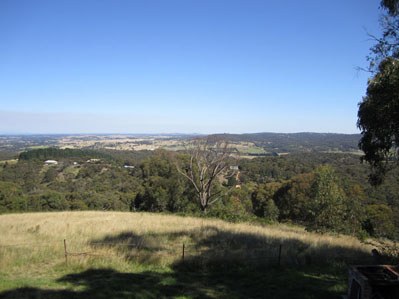 Halfway through our trail ride, we stopped for some welcome refreshments before heading back out into the sun. With our confidence levels much higher, we soon progressed from a leisurely trot into an exhilarating canter, which was just as thrilling as any rollercoaster ride.

By the end of the day I had slowly learnt to control Skippy, who was happy for me to be on a nickname-basis with him and abbreviate his title to ‘Skip’. While kicking my heels into his side failed to speed him up each time I tried, yells of encouragement from the friendly staff often sent him into a happy canter and we successfully rode back up to the stable. 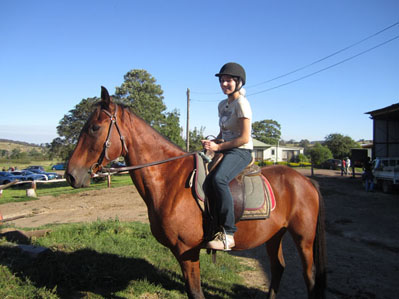 The experience overall was amazing, and something that you should try at least once in your life—at least just to witness the impressive agility and playful nature of these wondrous creatures. They each have their own personality—characteristics that the staff have a natural talent of responding to.

Uncle Nev’s offers trail rides all week, with standard three-hour rides scheduled at 9:30am and 1:30pm. Twilight rides and shorter sessions can be made by arrangement, and it is essential that you book beforehand.