Not everyone believes they can run a marathon, but the truth is we can. 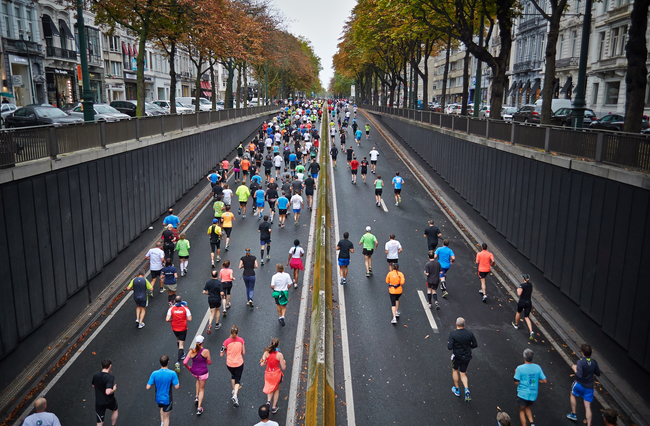 I’m not a runner. I’ve never been a runner. But I’ve always admired those people with the natural energy and ability to run long distances. They probably did little athletics and their bedrooms are full with first place ribbons. They most likely run marathons. But unlike them, running is not something I’ve ever felt my body was made for.

Now that I’ve told you this, it may come to you as a surprise that this year I’m running the Melbourne Marathon. The truth is, I’m only running the five-kilometre race, but it’s something I never thought I’d do. But anyone can be a runner and anyone can run a marathon.

Last year 11,000 people ran the half marathon. So, what makes these competitors better, different or more capable than us? Is it their natural athleticism, their competiveness, or is it their genetics? All those factors come into play, but both you and I can be just like them.

Dr Simon Sostaric from Melbourne Sports and Allied Health clinic says your genes play a factor in your ability to be effective in endurance running. But, it’s more injury related than anything else.

“Some people have genetic impact that reduces their risk of some type of overuse injuries or from having high magnitude of muscle damage,” Dr Sostaric told upstart.

“Genes affect everything there is about us. Even with the right strategies [people] might have a greater risk of injuries [because] of their genetic factor and also their body type.”

Sean Williams is a full-time running coach at Melbourne Pack, with 20 years’ experience of coaching, he says everyone can be a runner. He has trained absolute beginners, 80-year-olds and current record holders.

Williams says before taking on your first race there is a few things to consider or you could risk getting injured.

“You need to take it one step at a time and don’t jump in and try and do too much volume or too much speed,” Williams told upstart.

“There’s two things you can do when you’re starting out, either increase your volume or pick up your speed. You should really only aim to do one of those at a time and only in small amounts.”

According to a Sport Medicine Australia survey over 1 million Australians participate in some form of running. They also found 70 percent of recreational and competitive runners sustain overuse injuries.

Dr Sostaric says that if you push your body too hard, the accumulative effect will result in overuse injuries and your immune system shutting down.

“If there is enough repeated force then bones are susceptible to break,” Dr Sostaric said.

“The immune system doesn’t cope with that as well. For those who have a training load that is excessive for an extended period of time, then you develop fatigue and training syndrome and the immune system is compromised.”

But when it comes to why people choose to run Williams says there are many different reasons.

“Some of them love running, others actually don’t love it at all, but they’re looking for a challenge or they’re looking to lose weight or they’ve got some type of competitive instinct,” Williams said.

Williams says it’s human nature to want to get better and it’s one reason why people keep running; it’s competitiveness.

“If there is one common thing, it’s people do love to try and beat their personal best” he said.

Some of the benefits from running are clear. Your body will get stronger and leaner. But apart from that William says it also makes your heart and mind stronger.

“Fairly everyone who runs will tell you it makes them feel better physically, emotionally and mentally,” Williams said.

“You get a great endorphin rush when you run. It’s definitely better for the brain, as well. You can solve problems or remember something you’re studying more clearly.”

“So, if you can improve your metabolic economy you can spend less energy doing the same amount of work.”

But whether you want to be a record holder or run your first race, Williams says it’s a simple way to get outdoors and clear your head.

Photo: Marathon running By Mārtiņš Zemlickis available HERE and used under a Creative Commons Attribution. The image has not been modified.

Katerina Koteska is a third-year Bachelor of Media and Communications (Journalism) student at La Trobe University. You can follow her on Twitter @KoteskaKaterina