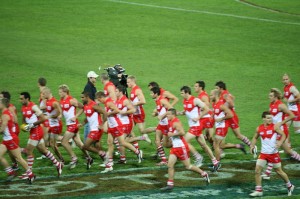 Sydney Swans warming up prior to a game (Image: Steve Baty via Wikimedia Commons)

Sydney Swans Manager of Recruitment Kinnear Beatson knows what’s required to build a successful AFL list. Beatson was involved in his fourth premiership this year, having previously been the head recruiter at the Brisbane Lions during its triple-premiership era in the early 2000s.

But this year’s flag was different for Beatson, as Sydney is not a club that simply follows well-worn paths to success. Instead, the Swans create their own.

Throughout the year, most AFL pundits suggested the Swans didn’t have enough talent to win the premiership. Most people overlooked the importance that Sydney’s attitude and culture would play.

It’s clear the Swans place a higher premium on attitude than many other clubs.

When I met Beatson recently, he alerted me to a study the Swans completed last year. It focused on players recruited over the last ten years ‘who had underachieved, for what the expectations were when they were drafted, and players who had over-achieved in terms of what they’d previously shown as a junior’.

The study involved searching through comments in coach’s reports and ‘pysch reports’, in the hope of identifying why there was such a gulf between what was expected of these players, and what they produced.

‘Invariably, it came down to their attitude to hard work and perseverance,’ Beatson says. ‘The ones that had been successful had comments like ‘first on the track, last to leave’ and ‘continually seeks feedback from the coaches’.’

Beatson cites his own experience in dealing with coaches as a differentiating factor in clubs’ approaches to recruiting. He says Sydney’s coaches are ‘a lot more involved’ in the recruiting process, compared to Brisbane, who ‘were more inclined to leave it to the recruiting staff’.

Sydney’s approach means that even ‘before the player arrives, the coaching panel have bought into the decision [and] share the vision about the potential of the player, rather than just [having] a kid arriving on the doorstep’.

This logic also applies to the Swans approach to second hand players.

‘We won’t bring in a recycled player unless there’s a specific need for them.’

Beatson believes having a set role allows the player to have a clear idea of what they need to work on in order to be of value to the team.

The 2012 premiership team was littered with players who had come from other clubs. Josh Kennedy, Ted Richards, Shane Mumford, Rhyce Shaw and Mitch Morton all played key roles in the premiership.

But how did the Swans manage to acquire all these players in the first place?

Beatson attributes much of Sydney’s trade-week success in recent years to ‘knowing the marketplace’, and having ‘an iron in the fire’ early.

When Adelaide’s Kurt Tippett nominated Sydney as his club of choice, many were surprised, but – by the sounds of things – not the Swans.

‘Everybody presumed that it was just a case of him going back to the Gold Coast or Brisbane. Through a bit of research we found out that wasn’t necessarily the case … Sydney was an option that was quite appealing to him,’ says Beatson.

Not only are recruiters doing more research on opposition clubs and players than ever, they’re becoming more pro-active in other areas of recruitment as well.

‘There’s not enough elite talent here in Australia to be able to service 18 clubs. Teams have become a lot more pro-active in looking outside the box.’

But identifying talent overseas can be tricky.

‘You can’t just duck over to a foreign country, run a talent camp, and try to pluck a herring,’ Beatson says.

‘In most cases you would run a relatively small, but efficient, network of people either in Ireland or America. In the past we have employed a basketball agent in America who deals with a lot of college graduates who look like they’re going to miss the NBA.’

Beatson admits there was ‘a bit of luck’ involved in signing Mike Pyke, a Canadian with a rugby background who played an important role in the Swans’ grand final victory last month.

Pyke ‘somehow had an association with [player manager] Michael Quinlan, who also managed Tadgh Kennelly’, a former Gaelic footballer who was part of Sydney’s 2005 Premiership.

‘Sometimes a bit of luck rolls your way,’ says Beatson, then recalling the acquisition of Jonathon Brown under the father-son rule during his time at Brisbane. ‘To get Jonathon Brown through a father-son [selection] … that’s a gift.’

The Swans weren’t so lucky with Joe Daniher, who could have headed to Sydney next year under the father-son rule, but instead chose to play at Essendon.

‘We were really close’ to getting Daniher, explains Beatson.

‘In the end, for Joey, a different vision was painted for him when James Hird was appointed coach … [but] we would’ve loved to have got him.’

As for the broader crop of talent available in this year’s draft, Beatson says, ‘it’s a reasonable draft. I don’t think it’s extraordinary though.

‘It’s very light on for ruckman and key position players’.

Having won this year’s premiership, the Swans didn’t have a strong hand in this year’s draft. Their first pick was at 22, and their second at 44.

But Sydney are used to having mediocre selections in the draft. The Swans believe bottoming out to gain better draft picks is ‘a cop-out’. It’s hard to argue, given the results. In the last decade the Swans have missed the finals just once, and have won two premierships.

If there’s one thing that other clubs can learn from Sydney’s success this year, it’s that a competitive mindset, both on and off the field, should be valued above all else.

Sam McInerney is studying a Graduate Diploma in Journalism at La Trobe University. You can follow him on Twitter: @SamuelMcInerney