Despite some hiccups, university accommodation is flourishing once again. 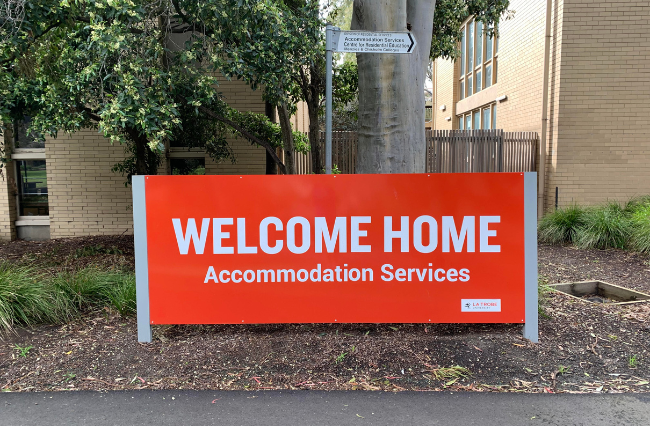 Ben McCure thought he was having a bad dream.

It was August 1, 2022, almost two-and-a-half years since education was first forced online due to the coronavirus pandemic. The University of South Australia (UniSA) student had just learnt he would once again be taking his classes from his bedroom.

UniSA made the call to conduct teaching and research online after a spike in COVID cases throughout the winter, as well as mandating masks in all indoor spaces.

“It was like a sense of déjà vu I guess, reminiscent of early 2020 when we were told for the first time that we were going into online classes for school,” McCure tells upstart.

“It sort of did come out of the blue a little bit, because we’ve been living a largely unrestricted life over here.”

McCure hails from a farm in Coojar, a small rural area in Victoria’s south-west. Despite rarely seeing a case of COVID-19 in his or any of the nearby towns, the farming community largely faced the same restrictions as metro Victoria.

Moving to Adelaide and living at St. Mark’s college for his tertiary education at the start of 2021 was a big decision for the 19-year-old, and ironically, he says it was to escape constant zoom classes and social isolation.

“Going through lockdown in Victoria and doing year 12 the majority of it online, the incentive of moving to South Australia for uni was the opportunity for face-to-face based classes,” he says.

It’s a familiar story across the country, with high-school graduates desperate for in person social interaction. La Trobe University’s Bundoora campus is doing its best to reinvigorate on-campus life for its residents after Victoria faced more than 260 days of lockdown throughout 2020 and 2021.

La Trobe Residential Life Coordinator, Morgan Di Domenico, says La Trobe is providing as many opportunities as possible for their students who often relocate hundreds of kilometres from their home to stay on campus.

With rent rising to up to $1500 per month in some of their colleges, Di Domenico says La Trobe is focused on making life on res worthwhile. Among the events they have offered this year are trips to the snow, free tickets to AFL games and an immensely popular food truck festival.

“400 residents actually came out [to the food truck festival], so that was about half the residents that actually showed up. It was good in the fact that you were building that social connection…whilst also having a free dinner,” she says.

“The ball, which is coming up in a few weeks is also going to be a very good opportunity for people to meet other people.”

Cameron Burns, another of La Trobe’s Residential Life Coordinators says the residential assistants from each of the colleges, who have lived on the campus for multiple years, are crucial in articulating the new initiatives being implemented at La Trobe to new residents.

“The last thing we want is residents feeling like they have to stay in their room the whole time,” he says.

With lockdowns now a thing of the past, the university is intent on making life for their residents better than it was even before the pandemic. Burns says it was imperative at the university’s recent open day that they were transparent with their prospective new occupants about life in Bundoora.

“We told them [residential assistants] to be honest with people [and] give [new residents] an accurate portrayal of residential life,” he says.

“Then the accommodation team were there to gauge interest in how many future prospective residents [there are] and to give them the nuts and bolts like financial cost and how you go about becoming a resident.”

It’s an important time for universities around Australia with 2022 quickly coming to an end, as life appears to be returning to normal at higher-education campuses. Just like McCure did throughout year 11 and 12, many students are now weighing up where they spend their years following high school graduation.

Even though he reverted back to remote learning just weeks ago, McCure suggested it should be a priority, especially for Year 12s, to start thinking about living on their university’s campuses next year.

Indeed, the journalism and professional writing student has been involved in inter-college sporting events, residential balls and music festivals – all worthwhile experiences life at St Mark’s has provided.

McCure says despite COVID being a big part of his life living on res, there has been a big push to get it back to normal.

“We’ve got some students who were here pre-COVID, so they know what it was like [before COVID],” he says.

“I had no real expectations of what college life would be like…even the start of this year COVID was just part of living at college, but we’re definitely starting to see more of a shift in line with the way the community is moving to just living with COVID.”

It’s been one of La Trobe’s big focuses too. Thanks to the events and lack of restrictions, Di Domenico says the atmosphere at La Trobe has changed this year with no lockdowns and fewer restrictions.

“There have been a lot more friendships I would say that have obviously lasted a little bit more long-term, because people haven’t been leaving and coming back,” she says.

“It has made that sense of community a lot more achievable.”

STORY | Riley Alexander is a second-year Media and Communications (Sports Journalism) student. You can follow him on twitter @Ralexander2002