The Geelong draftee is determined to make a name for himself outside of his father's legacy. 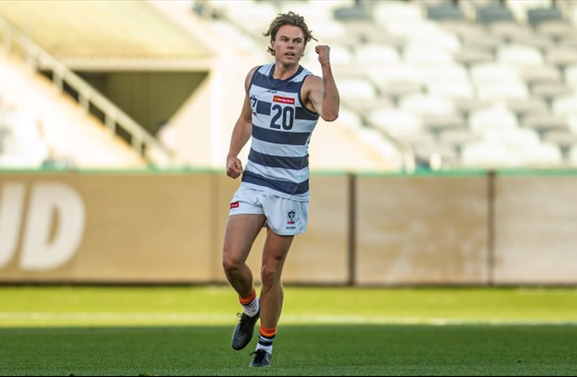 The Brownless family had just moved into their new house and didn’t even have a couch to sit on, on the night of the 2018 Draft.

Nicky Brownless had just managed to set a TV so that she and her close family could watch to see if her son, Oscar, would be drafted to a club.

“We actually just moved house – shocking time to move house – and Mum just set up the TV and we were all just sitting on the floor,” Oscar Brownless said.

“I planned to have friends come over later on, although I didn’t set it in stone otherwise it would have been pretty awks if they came around and my name hadn’t been announced,” he laughed off.

Brownless’ teenage lifestyle had changed course within a second when he was picked up by the Geelong Cats at pick 74 with the father-son selection.

“I saw a number come up on my phone and I thought to myself ‘oh I won’t answer it [because] it’s family time,’ Brownless said. “About 20 minutes later I just checked my voicemail. It was Joel Selwood, the captain of Geelong and he was just saying well done, just wanted to ring to congratulate you.”

However, he was not going to let being ‘Billy’s son’ get in the way of making a name for himself, and it seems that Billy encouraged the same.

“Dad’s been great not to put any added pressure on me. He knows that the game’s come a long way since he’s played, he’s a bit outdated,” Brownless said.

“He is great at reminding me that I am my own player, this is my own career. So, in terms of that perspective, I don’t feel like there’s added pressure.

“You always get the remarks and people say things to you but it’s just something that I’ve learnt to put up with in my career and I’ve been playing with it. I don’t see myself as anything different.”

Brownless was now the little kid of the club walking around with players like Selwood, Tom Hawkins, Gary Ablett and the man who had taken him under his wing, Mitch Duncan.

“Mitch is someone who I try to base my game off,” he said. “He’s a bit of a role model for me.

“I was fortunate enough to go into the club once a week and just look through some revision of my game. Mitch would just point out some little tips, things I could work on, things I was doing well. So, from last year I had him as a role model in my eyes.”

Brownless can see himself succeeding at Geelong, and is already considering the possibility of captaining the Cats one day.

Reminiscing as far as his junior days, he recalls how he always found himself captaining his club, something he thoroughly enjoyed doing.

“Leadership is something that has come naturally for me,” Brownless said. I’ve captained the Falcons team, Vic Country, and throughout my junior career always seemed to find myself in that position.

“I would love to [captain the Cats] and I can see myself doing that in the future.”

For now, Brownless has his sights set on the near future, as he awaits his debut game for Geelong’s senior side. But Brownless says, he isn’t particularly worried about the timing of when his first match arrives.

“It’s hard to say [when it will happen],” he said. “Geelong are doing so well at the moment… Hopefully, I mean I want to play AFL, that’s the dream. But it’s not something that I get too caught up on.”

With the maturity beaming from Brownless and the amount of work he has put into his football already, there’s no doubt his run through a Geelong banner will come soon enough.

Tricia Mifsud is a second year Bachelor of Media and Communications (Sports Journalism) student at La Trobe University. You can follow her on Twitter @triciamifsud