The aspiring ballet dancer saw a performance at the College of the Arts and never looked back. 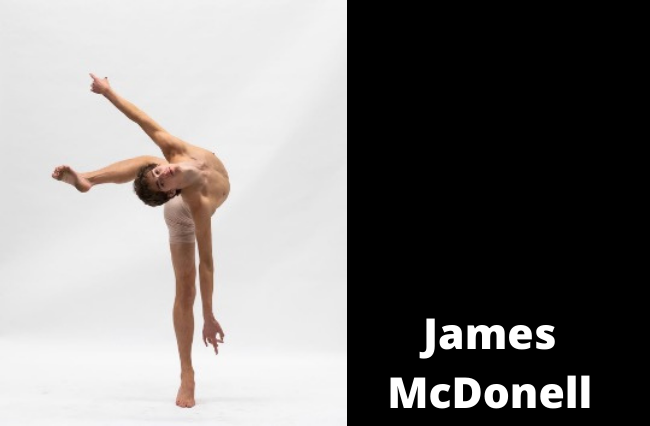 When 19-year-old dancer James McDonell wasn’t accepted to the Australian Ballet School (ABS) on his first audition, the experience only fuelled him.

Now, the ABS student lives in an apartment perched high above Melbourne’s skyline, overlooking Southbank and The Arts Precinct. It brims with indoor plants, a consequence of an ever-flourishing pandemic obsession. It’s also a nod to his upbringing and his love for nature.

“I grew up on a five-acre property with just my parents and I in Riddles Creek, around 60km northwest of Melbourne. We have had a bunch of animals over the years: sheep, alpacas, dogs, cats. You name it, we’ve had it,” McDonell laughed.

McDonell’s parents are recently retired paramedics. He recalls them picking him up from his rural primary school in their ambulance, which all of his classmates thought was the “coolest thing in the world”.

“Mum and Dad never had any expectation for me to follow in their footsteps and work in the medical field. They just wanted whatever I wanted. I’ve been so lucky,” he said.

When McDonell started attending dance classes at his local Riddles Creek Dance School at six, he was immediately noticed for his natural facility. Teachers encouraged him to take up ballet classes.

A pivotal moment came at 10, when ex-dancer and McDonell’s ballet teacher, Andrew Barneveld, took him to see a performance at Victorian College of the Arts Secondary School (VCASS) which Andrew himself attended many years ago, when it was formally the Victorian College of the Arts (VCA). VCASS is a specialist arts high school located in the Melbourne Arts Precinct that offers arts training alongside academic studies. Entry is by audition only, and places are limited.

“I remember Andrew saying that this is something that I could do. I never realised that a school like that existed, let alone in Melbourne. VCASS became my dream,” McDonell said.

So for two years, McDonell worked harder than he’d ever worked before, moving to a more demanding dance school and taking extra classes to improve his technique. He was accepted into VCASS in Year 7 and was one of only eight boys to get in out of the many hundreds of Australian and international students that auditioned.

“It was such a relief when I got the acceptance letter in the mail. It was like a weight had lifted off my shoulders,” he said.

VCASS was a place he felt open and free to express himself, and McDonell came out as gay at age 14. Australian charity Minus18 also created a safe space where he was able to explore himself and learn more about the LGBTQIA+ community in Melbourne. Their events such as the Queer Formal were super important to McDonell.

“At that point, I hadn’t met a lot of people my age who were identifying as gay yet. Minus18 helped open me to people that I could relate to. Their events are so important for young people who may be struggling at home or may need help working themselves out,” he said.

In 2018, Minus18 and Converse asked McDonell to be a part of their campaign for their Pride collection designed by singer and actress, Miley Cyrus. He was also asked to run onto the field with Minus18 at the St Kilda v Sydney Swans AFL Pride Game at Marvel Stadium

“Both of those experiences were unforgettable. They made me feel so accepted as a part of the LGBTQIA+ community,” he said.

His time at VCASS also had created challenges. McDonell struggled immensely with injury, due to his growing body and the pressure placed on him from dancing for hours every day. Studies have shown that intense ballet training during adolescence can affect maturing growth plates and the growth process itself. For most dancers of any age, it is typical to be almost constantly working with small injuries.

“Everything that could have a niggle has had a niggle. My hips, neck, back, shoulder blades, knees, calves, hamstrings, toes…literally everything!” he said.

“It was like I was on a roller coaster ride for two years while I grew. I would get better and then dip and get worse again.”

The injury that has affected him the most is a back injury that carried on for over a year, until a scan found multiple fractures and bone marrow leakage in his spine. Rehabilitation with his physiotherapist was obviously important for him physically, but also crucial for his mental health says McDonell.

“Having something to focus on other than dance through rehab and exercise such as Pilates and Gyrotonics helped me to see the positives of the situation. For example, gaining strength for when I could dance again.”

After recovering from his back injury, McDonell decided to audition for The Australian Ballet School (ABS) for their full-time training program. The ABS is a highly selective ballet school located in Melbourne that offers world class ballet training. The school is a feeder for The Australian Ballet Company, with past students making up 95 percent of the company. Entry into the school follows a rigorous audition process.

After not being accepted the previous year, McDonell re-auditioned and was successful.

“That was the next step in my dance career and I’d actually achieved it. I couldn’t believe it when I found out,” he said.

McDonell’s experience at the ABS has been shaken up by COVID-19, as have all Victorian dance institutions for the past 18 months. Classes were moved to at-home Zoom lessons, and performances were scrapped. However, he feels that moving to the school at the beginning of 2020 has been the best decision for him and his future career.

“After these years at the ABS, I’ll never experience something more difficult in my career. The school sets you up for a life in a company by pushing you to your limits. It’s exactly what I needed,” he said.

In the future, McDonell is keen to dance for The Australian Ballet Company or any other Australian or international company.

“After COVID, I can’t wait to get back into the studio to prepare to get back on stage. The way that I feel on stage is so invigorating and I cannot wait to chase that feeling again. It’s like nothing else.”

Article: Paris Mahar is a first-year Bachelor of Media and Communication (Journalism) student at La Trobe University. You can follow her on Twitter @parismahar