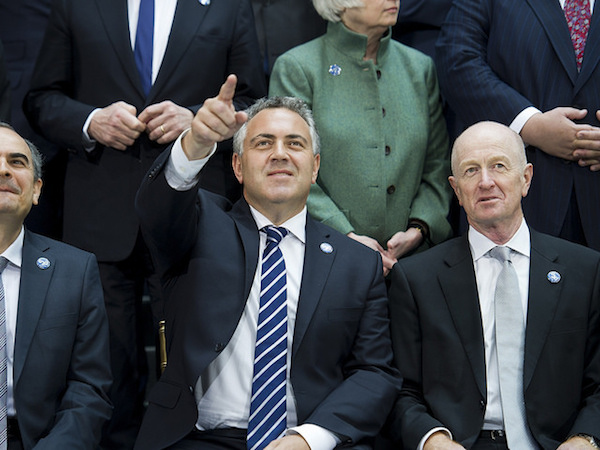 The knives are being sharpened, the altar is being polished, and, in this writer’s opinion, Joe Hockey’s time as treasurer is about to come to a sacrificial end.

It’s been 347 days since Tony Abbott, Joe Hockey and the Coalition took over the reins of the Australian government. It has been what could only be described as a rocky honeymoon period for the new leaders – and things don’t appear to be getting any better anytime soon.

After offering a seemingly heartfelt apology on August 15, it appears that for many Hockey’s words regarding his regret over allegedly insensitive comments regarding impoverished Australians were simply the tears of a crocodile.

Out of more than 11,000 individuals who responded to a poll hosted by The Age, an overwhelming 86 per cent responded by saying that Hockey’s comments were “too little too late” and that they would not be accepting his apology.

Despite Hockey’s attempts to manufacture damage control it appears that the Liberals’ infamous wall of silence regarding the condemnation of fellow ministers has finally begun to crack.

The collapse began with Education Minister Christopher Pyne, who despite being a staunch warrior for the Coalition’s political machine, declined six separate times to offer any consolidation for the Treasurer on Channel Nine’s ‘The Today Show’.

Prime Minister Tony Abbott was the next in line to pass on the opportunity to support Hockey’s comments regarding the poor and the fuel excise.

When asked by a reporter in Canberra how he felt about Hockey’s comments, Mr Abbott coldly replied, “Well, plainly, I wouldn’t say that”.

Finally completing an almost perfect storm of unwanted criticism for Hockey, Julie Bishop on August 17 has urged the Senate crossbench to compromise in order to successfully launch the key actions behind Hockey’s Federal Budget, first presented in May of this year.

‘I look back at the GST that John Howard took to the 1998 election. We won that election with a very detailed plan to introduce a GST, yet we still had to compromise to get it through the Senate,’’ Bishop told ABC radio.

‘‘I see that as an indication of the need to compromise to achieve your aims, even after an election.”

These comments come as a stark contrast to the Coalition’s past stance on the budget, with Abbott and Hockey, along with various others Coalition stakeholders, previously declaring that the Australian people had given them a mandate following the last election and that they were simply acting accordingly in government.

Unfortunately for Hockey, members of his government aren’t the only backers who may have lost faith in the Treasurer.

On the 15th of August The Daily Telegraph surprised some by publishing Samantha Maiden’s article ‘Taxpayers footing bill on Treasurer Hockey’s 1.5 million Canberra home’ which in a scathing tone addressed the accusations that Hockey has been taking advantage of the travel allowance given to federal politicians.

The Daily Telegraph, along with News Corp boss Rupert Murdoch’s other media organisations, have been seen to be consistent allies of the the current government, and the publishing of Maiden’s article may just mark the beginning of Murdoch transitioning away from supporting the Abbott and Hockey combination.

So what does it all mean?

It is possible that in the coming months, out of pure political desperation, Treasurer Joe Hockey will be made into a sacrificial lamb and a political scapegoat in order to save governmental face concerning the most unpopular Federal budget in Australian history.

The government is desperate for any sort of a game changer, and by removing Hockey as Treasurer and installing an alternative, the Coalition may be able spin the Australian political wheel once again in order to shift attention away from the first draft of the budget, and with a few steps of compromise with Labor the government should look to move towards greener pastures.

Perhaps, in an effort to shift blame off the government, Hockey will step down due to ‘undisclosed personal reasons’, allowing a dignified opportunity to leave on his own accord.

Removing the steadily controversial Prime Minister is not a choice for the Coalition, as any change in leadership would amount to hypocrisy of the highest order after their endless criticism of the Rudd/Gillard saga.

Unfortunately for Joe Hockey, his title as Treasurer is not quite as coveted and not quite as fragile. Watch this space.