In the small community of Balgo in northern Western Australia, Aboriginal elder Margaret sees through another day with deteriorating health.

She works at the local Kapululangu Women’s Law and Cultural Centre, teaching young indigenous people about their culture which has been passed on from generation to generation for thousands of years.

She teaches so that young Aboriginal people can know themselves, and follow in the footsteps of their ancestors in the hope that the years of neglect and trauma they’ve suffered can be overcome.

She knows her time is limited, and that she can’t waste a single minute.

And yet, her late-phase kidney disease is often an impediment to her work.

But Margaret, among with other Aboriginal people in this small community, know they’re lucky to have volunteers from other Australian cities to help them with their basic day-to-day needs. 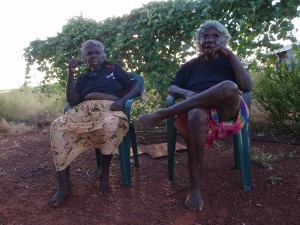 ‘They knew we weren’t going to be there forever,’ says Amelia Freelander, who volunteered in Balgo earlier this year.

‘So many people who come in to these communities – white people especially – stay for a couple of months and leave.’

‘But as soon as [the women] realised we were there to make a connection with them, the barriers came down.’

25-year-old Freelander is a Sydney-based news journalist with SBS.

In February, she volunteered for four-weeks with Indigenous Communities Volunteers — a non-governmental organisation which works with Aboriginal communities in an effort to improve their lives.

The organisation is always hunting for volunteers to work on community-driven projects.

Freelander found out about the organisation, applied online, and was flown to Balgo to assist at Kapululangu.

‘Everybody goes away on a project with expectations,’ she says.

‘You think you’re going to change the world and that may not happen.  You may just touch the lives of one or two people, and sometimes that’s as successful as a project may be.’

Along with another volunteer, Freelander was assigned to the Centre so they could assist the women with their teaching.

Or so they thought.

Good-willed as it was, Freelander says there was a huge contrast between the role that was described to them, and what they ended up doing.

Many of the women are Aboriginal elders with little access to basic health services.

And so Freelander’s role soon turned in to a carer’s one.

‘It was very challenging because we didn’t come from a carer’s background,’ she says.

‘But we got more from doing this for a month because we built such close relationships with the women.’

Freelander would cook, clean and take care of the hygiene needs of the women.

And this wasn’t always easy. 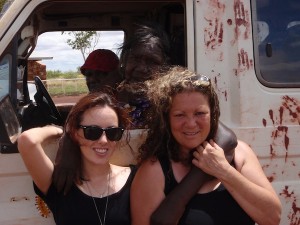 Margaret was one of the women Freelander was assigned to.

‘Because of her late-stage kidney disease, she would often vomit after every meal.  She also had a bucket by her bed, and it was embarrassing for her because she often couldn’t make it to the bathroom so she would have to go in the bucket,’ she says.

Freelander compares Margaret to her late grandmother who passed away a few months ago.

‘We were lucky because as [my grandma’s] health detoriated, a lot of the modern comforts made her life easier,’ she says.

‘Little things like having a commode next to her bed so she didn’t have to make the trip to the toilet every night.

‘These women did not have any of that; but you never once heard them complain.’

Freelander says she learnt just as much about herself as she did about this tight-knit community.

‘But I realised that the personal relationships that I have – that these women highlighted to me – is so much more important than a new pair of shoes, or a new dress, or the type of car I have.’

And she says the experience has helped her understand the stories she works on day-to-day as a journalist.

‘Most of the time we’re just rehashing the stories and saying what’s already been said.

‘But you really understand what it is you’re reporting on when you see the face of the people that your story is directly affecting.

‘And I don’t think that happens enough.’