India is now facing a six-week lockdown because of the coronavirus, only months after a curfew was imposed in the capital city. 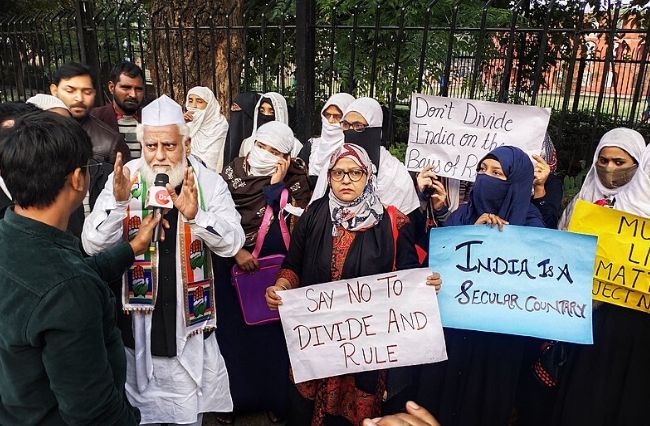 On 24 March, 1.3 billion people in India went into lockdown for three weeks, which has now been extended to 3 May. Only a month prior a curfew had been imposed in the capital, New Delhi, to curtail brutal attacks caused by rioters over the Citizenship Amended Act (CAA).

Since the emergence of the novel coronavirus, the government has come under fire for exploiting the six-week lockdown to make arrests of students, activists and senior editors, according to author and activist Arundhati Roy in an interview on the German international broadcaster, Deutsche Welle (DW).

In February, New Delhi had witnessed its worst violence in decades after clashes in the territory killed over 50 people and injured more than 200. The carnage lasted four days, destroying the streets of the city in February this year.

The capital of India is home to around 20 million people with a near 80 percent Hindu majority and a 12 percent Muslim minority. Nearly a thousand protesters took to the streets to protest the revision of the CAA, deeming it discriminating against Muslims.

The Citizenship Act of 1955 offered illegal immigrants to be naturalised after living and working locally for 12 years. The revision halves it to six years and only offers it to those who are Hindu, Sikh, Buddhist, Jain, Parsi or Christian, from three neighbouring Muslim countries namely Pakistan, Bangladesh and Afghanistan where they had fled from persecution.

Indian-born Professor Akhtar Kalam, Head of External Engagement at Victoria University, believes that India’s ethos of being a secular country is now being challenged by the present government, citing the CAA as a prime example.

“Muslims are finding themselves to be an ‘outcast’ sort of a citizen. If the present government stays for a longer period of time, they might not have the citizenship of the country,” Kalam told upstart.

Reflecting on the Delhi riots, Kalam highlighted the damage caused to hundreds of households and shops in addition to the lives lost and injury caused.

“Not only Muslims were killed, Hindus were also killed. Some of the Hindus did an amazing job [saving the Muslims]. There would’ve been more than double the amount of people killed had the Hindus not come,” he said.

La Trobe University Business graduate Ankit Mittal, who was born and bred in Delhi, doesn’t believe these were riots, but rather a bullying tactic.

“The current politics in India has indeed led the minds of [a] majority group to take on the minority. This kind of political model we have seen in the past in global politics. What we saw in Delhi was a window to that model,” Mittal told upstart.

He blames the BJP for the pandemonium, asserting the innocence of the residents who are now suffering the repercussions.

“I see the beautiful place where I was born and raised breaking into pieces.”

“A political alternative is highly desired in this situation to minimise that suffering. A growing and inclusive economy would ensure that people are happy, occupied, philosophical, honest and compassionate about each other’s existence,” he said.

Kalam’s thoughts reflect Mittal’s. The Victoria University professor fears the CAA amendment will not only marginalise Muslims but may push them to leave India.

“We do not want to separate from India. We want to live in India, we want equal rights in India. We will fight for that and die if required,” Kalam said. “But in spite of all this, we are a peace-loving country. We still believe Mahatma Gandhi’s principle, a non-violent movement.”

Adiba Khan, an international student from Delhi currently residing in Australia, fears for her family and friends back home as the hatred towards Muslims escalates while the Modi government holds power. She was reluctant to give her full name in case she faced backlash.

“Fortunately, my family was in a safe area so they were physically okay, but a lot of other families lost their homes, businesses, properties and above all, their loved ones,” she told upstart.

Referring to the nationwide lockdown which commenced on 24 March, Khan addressed the double-standards for the common man having to strictly quarantine themselves, but the government representatives seeming to be exempt.

“The ruling party, BJP, are having lavish weddings and parties still even when the lockdown is happening even though a common man can’t even go outside. People are being beaten if they go outside for non-essential purpose,” she said.

Khan emphasises the need for a change in government with a fair judiciary system and tolerance shown to all Indians.

“I believe India is a great country run by a not so great leader. Communal hatred has never benefitted anyone and will never benefit anyone,” she said.

Photo: Locals in New Delhi protest against CAA CAB NRC taken by Sanjeev Yadav located HERE used under a Creative Commons Attribution. The image has not been modified.