La Trobe University’s journalism lecturers would not have been overly impressed with their boss, Vice-Chancellor Paul Johnson.

All year, they have been espousing the importance of Twitter and other social media in the rapidly changing news gathering environment. 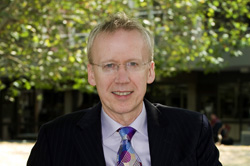 But Johnson, talking to a group of first-year journalism students, said he found it ‘bizarre that so many people in the world think that everyone else in the world should be interested and engaged in whatever 140 characters of opinion they have on any subject’.

This amused the students, but the lecturers would have been more approving of Johnson’s plea for tougher interviewing.

‘In particular, when you get the opportunity to interview politicians, make sure that you really nail them on the questions,’ says Johnson.

Johnson is here for a question-and-answer session in what will potentially be his last opportunity to address the university’s students; after four years, Johnson is leaving to become the Vice-Chancellor of the University of Western Australia (UWA) in 2012.

Johnson stands in front of an unusually full lecture room. It’s a muggy day and Johnson has taken off his jacket to reveal a bright, pink shirt. He has a thin frame and his short blond hair and darting eyes accentuate his bird-like features. Johnson seems comfortable before the students and appears very academic.

But growing up in a lower-middle class family in Bath, in southwest England, higher education was not always on the horizon for Johnson.

‘I grew up surrounded by thousands and thousands of eggs everyday,’ says Johnson, whose father worked at an egg-packing yard. Both his parents had left high school at a young age. ‘I didn’t even know universities existed.’

However, his grandmother, who was forced to forgo a university scholarship to help her family, was insistent that Johnson attend university.

Johnson did not let her down. He studied modern history and economics at the University of Oxford, got his doctorate and then joined the London School of Economics as a lecturer in 1984. He became its Deputy Director in 2004.

In an impressive career spanning 30 years, Johnson has also published and edited numerous books, and has been an advisor to the World Bank, the British Government and the United Nations Research Institute for Social Development.

Johnson is the first to recognise the unique opportunities higher education provided him, saying he became ‘aware of worlds I did not know’.

The transformative powers of education seem to underpin Johnson’s philosophy as Vice-Chancellor and he is especially passionate about broadening the access to education for disadvantaged students.

In his plan for La Trobe, titled Vision 2015, Johnson made this a priority, setting a goal to double the number of indigenous students and to increase the number of students from low socio-economic backgrounds by 2.5 per cent.

‘I think education is hugely important as a force for social and personal transformation,’ says Johnson.

In his role as Vice-Chancellor, Johnson has considerable power shape the lives of students. But he no longer lectures, and appears to enjoy this rare opportunity directly engage students. When he talks, he assumes the tone of an encouraging lecturer, and moves his hands expressively to emphasise his points.

By his own admission, his tasks as Vice-Chancellor are rather mundane and Johnson sees his role as the chief executive of a business.

When Johnson came to La Trobe in 2007, the business was in trouble; the university was in debt and had a tarnished reputation.

Johnson has since turned things around and says he is leaving the university ‘in a position which is intellectually and financially stronger’. La Trobe now has an operating surplus and Johnson secured $124 million in federal funding in 2009.

Though the funding was welcome, Johnson is not entirely sure that all university funding is given on merit alone, saying that the direct relationships between politicians and universities allow for ‘pork-barrel politics’.

It was this closeness between politics and education that most surprised Johnson. In the UK, there is an intermediary body that provides separation. Not so here.

Within two weeks of arriving in Australia, Johnson attended a dinner with the Prime Minister and had a meeting with the Education Minister the following week.

The access has benefits says Johnson, but laments that ‘the most fortunate Vice-Chancellors in the country are those that have campuses in marginal constituencies because they know that when an election comes around that they will get … millions of dollars flowing into them’.

2012 will provide more challenges for universities. They will no longer have guaranteed funding; it will be proportionate to the number of domestic students they enrol.

Universities will also have to contend with increased competition and declining resources per student. According to Johnson, to be viable universities will have to change their ‘mode of production’ and use technology to deliver content more cost effectively, with teachers facilitating the learning and not ‘giving out information’.

Johnson’s answers signal other worrying signs ahead. He thinks a Liberal government may further deregulate fees and even introduce a voucher-based funding system, which is ‘a typical right-wing…approach to how you bring consumer choice into the provision of public services’ says Johnson.

But Johnson is not daunted by what lies ahead. If anything, he is looking forward to the challenge.

Johnson’s immediate concern is moving his family to Perth.

When he arrived in Melbourne with his wife and two young children, not having a support network was particularly hard for his wife, says Johnson. But in Perth, his wife Susannah has an aunt and cousins whom the family are very close to and can always call on.

‘The kids are very, very excited at the prospect of being able to walk around to their aunt’s house and just call in,’ says Johnson.

Johnson and his family have fully settled into life in Australia. They became citizens earlier this year, and Johnson does not see them going back to the UK.

But the man who claimed he can ‘always spin a yarn with words’ appeared lost when asked what turned out to be the most troubling question that afternoon: Who will he support in the Ashes?

After a long pause, Johnson concedes ‘it will have to be Australia now’.

Emil Jeyaratnam is a Graduate Diploma in Journalism student at La Trobe University.  You can read more of his writing at his blog. This interview of La Trobe’s outgoing vice chancellor was conducted as part of the first-year subject, The Interview.