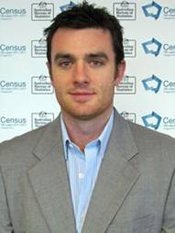 David McHugh is a former Channel 7 sports reporter, and has worked for a number of rural news media outlets.

He has since worked in public relations for the Australian Census at the Australian Bureau of Statistics (ABS), where he gained nationwide media coverage for giving the 2011 Census Twitter a sense of humour.

How is currently Media Manager of Haystac Public Affairs.

This podcast is the fifth episode of Life After Journalism, a series of interviews with former journalists.