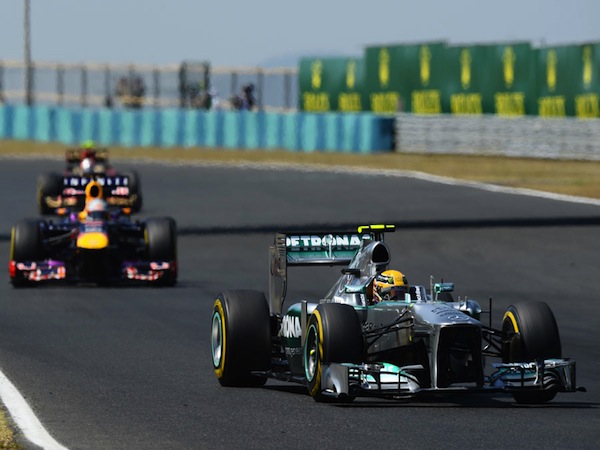 The sight of Lewis Hamilton’s glistening silver Mercedes dancing around the Hungarian tarmac to victory was a welcome relief to many Formula 1 pundits and spectators worldwide.

Not so much for the historic element as it was Hamilton’s first Mercedes win, but more from the prospect of a title challenger for the ever-dominant, and at times arrogant, Sebastian Vettel.

In the pursuit of enjoyable and competitive sport many racing fans have grown to dislike, berate and detest the German’s every move – which is a far cry from three short years ago when he was headmaster Bernie Ecclestone’s favourite pupil.

Ecclestone may still exalt the Red Bull ace, but those repetitive quirks and idiosyncrasies are no longer a constituent of the Vettel charm – rather an unbearable annoyance that has seen his fans dwindle quicker than his Red Bull’s single-lap pace.

I will confess I had an admiration for his mentality and skill set inside the cockpit of a Formula 1 car, but lately have found myself scrambling for the remote control the second he greets his team over the finish line. In fact, I will do just about anything to avoid his painful post-race celebrations. The stroking of the bull followed by his unique one finger salute has become as tiresome as it is irritating.

But let’s put this discussion in reverse.

Formula 1’s survival in mainstream sport relies heavily on the competitiveness of its product. Without competition, excitement decreases and therefore so does viewing desire. For this reason alone the other Formula 1 teams must not take a backseat to Vettel and Red Bull’s recent dictation.

At the best of times it can prove a mission to convince sports fans of Formula 1’s value. If we eliminate the competitive edge which makes sport so watchable, we can also wave goodbye to the new generation of Formula 1 observers as well as a plethora of seasoned fanatics.

But that is not all Formula 1 will lose.

So extreme is the Vettel dominance that his nearest rivals have begun questioning their own equipment and standing in the sport. Fernando Alonso is as disappointed as any. His frustration has led to morale sapping insults directed at his Scuderia Ferrari team as he frequently vocalises his desire to drive the prized RB9.

Even Vettel’s teammate Mark Webber has decided to call an end to his Formula 1 career as his passion and hunger has dried up along with his race wins.

With Formula 1 is so often (and correctly) referred to as the pinnacle of motor sport, it would be a travesty to see the finest drivers veering off into other categories where victories and championships are realistic.

Formula 1 cannot raise the white flag again to Vettel. Instead it needs every ounce of support and passion to be directed towards Hamilton.

Admire him or despise him, the Mercedes pilot appears to be the only driver in the field with the equipment and ability to mount a challenge towards Vettel in 2013 and beyond.

Hamilton is an astounding athlete in his own right and feeds off confidence. Unfortunately that confidence has abandoned him too often during his roller-coaster ride of a career.

Formula 1 has only just rebuilt from the Schumacher domination of the early-naughties – or Formula 1’s ‘dark times’ as it is frequently labelled.  With three world titles on the trot, Vettel is heading towards replicating his compatriot’s unprecedented achievement and re-boring the sport to tears. Some may argue he is already well on his way.

So whether it is indeed Hamilton, Alonso or young Max Chilton, for the sake of Formula 1’s future someone needs to play the starring role in ending the chapter that is the Sebastian Vettel fairytale.