The 22-year-old defender is already making her name known on the international stage. 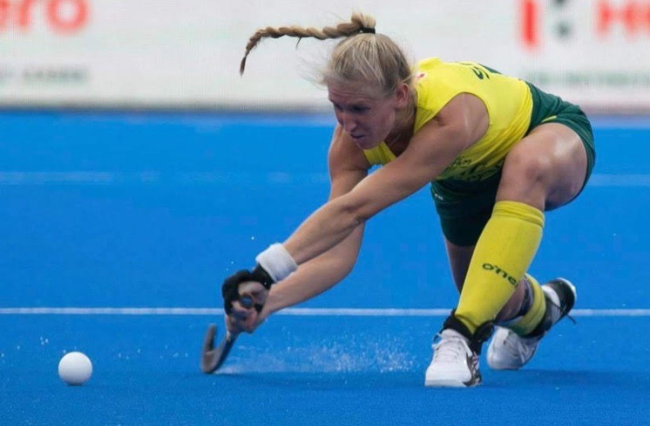 “Dad was actually telling me a story the other day, there was someone hitting a free hit and I just stood right in the face of this dude and one of dad’s mates looked at him as if like ‘what is that girl doing? Is she nuts?’.”

Hattie Shand is renowned for her courage on the hockey pitch and has been since she was a young girl. But the Hockeyroos defender didn’t always love the game like she does now.

Craig Hole, one of her junior coaches, remembers Shand was as “tiny as a dot” when she first wielded a hockey stick and recalls a time when she nearly quit the sport.

“I remember she actually nearly quit hockey because it can be quite fearsome for a junior,” he tells upstart.

“She was actually quite scared initially and was convinced to carry on by her mum and dad and then just thrived, absolutely thrived.”

Shand remembers those early years as well, saying had it not been for her mum, she might not have had the success she’s had since taking the professional hockey route.

“I sort of just played because my brother did, and I found it all a bit too scary. The boys hit the ball a bit too hard because it was mixed back when I was young,” she said.

“I quit and wanted to play netball and mum’s like ‘nup, you’re not playing netball’. So yeah, it took me a couple of weeks and then I was back into it.”

Since that moment, Shand hasn’t looked back for a second. Indeed, the South Australian says her formative years back in her hometown of Naracoorte in the state’s south-east laid the foundations for her current game style.

The 22-year-old now has nine international appearances under her belt after making her debut against New Zealand earlier this year. It has been a remarkably quick transition into the national side for Shand, with the Adelaide Fire player saying she didn’t truly believe she could play for her country until last year.

“I don’t think it was until watching the Olympics in Tokyo … and once we lost the semi-final to India, I was sitting at home watching and I went for a run,” she says.

After that, she made her decision.

“I was like, I’m doing this. I do not care if someone’s going to say ‘no, you’re not good enough’… I’m going to make this team.”

And she did just that. Shand has just completed her maiden World Cup campaign with the Hockeyroos in Spain. From there she flew north to Birmingham in England, staying with the national squad as a reserve for the Commonwealth Games.

Being part of the national setup is a position Hole and many of her junior coaches knew she would be in once they saw her work ethic both on and off the pitch. While she never struck Hole as the most assertive and powerful of players, Shand’s drive to reach as high a level as possible always stood out.

“She was good, always good. You could tell right from the word go that something was going to happen later on,” he says.

“Did she ever dominate? I’d say no, but you could just tell that she was going to go places because she just never gave up.”

Shand’s past two months in Europe with the national side saw her claim bronze at the World Cup with her team defeating Germany 2-1 in the third-place play-off. The defender says while it was daunting coming up against the world’s best in her first international tournament, she was able to thrive due to her relative anonymity.

“It’s kind of exciting because you look at the players on the Dutch team or from Argentina, and you know exactly who they all are and what their skill set is,” she says.

“It’s kind of a free pass because they can’t come in with any background knowledge on me.”

With the first steps in her international career behind her, Shand has one clear goal in mind. With the 2020 Tokyo Olympics pushed back a year due to COVID-19, the turnaround to the next one in Paris became shorter and made her dream of competing in the 2024 version of the event all the more real.

“Early on next year pro league starts which is like a home and away series of matches. We’ve got three in Australia and three overseas,” she says.

“From there, Paris (2024 Olympics) is obviously the main goal and what we’ve been working towards this whole time and what these tournaments have been building us for. So yeah, that’s the goal.”

No matter where Shand is in three years’ time, Hole says the South Australian will continue to be successful as he reflects on her greatest trait.

“She’s just exactly the same as she was when she was a junior, just a lovely person to talk to,” he says.

“She’s always happy and upbeat and that’s the overwhelming thing, or the overriding factor is (she’s) just a genuinely nice person. She’s just a delight.”

Article | Riley Alexander is a second-year Bachelor of Media and Communications student at La Trobe University. You can follow him on Twitter @Ralexander2002