The 2020 AFL Grand Final will be hosted outside of Victoria for the first time. This begs the question: should the match be shared every year? 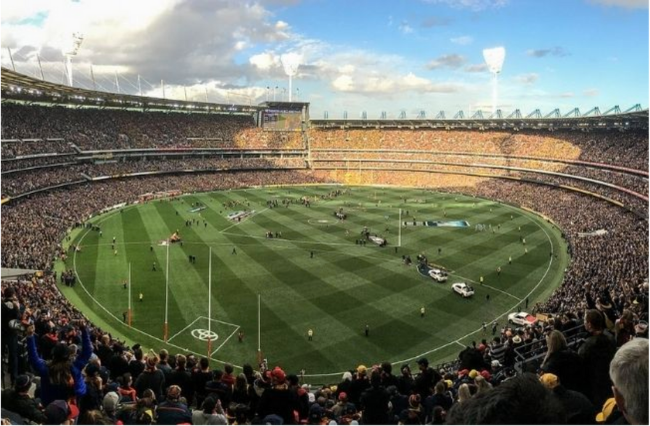 For the first time in the history of Australian Rules Football, the Grand Final will be played outside of Victoria. 2020’s AFL decider will be held in Queensland due to Victoria’s COVID-19 restrictions, making the legendary Melbourne Cricket Ground unavailable to host one of the most popular sporting events in Australia.

The discussion over the venue of this year’s Grand Final has reignited debate over the current MCG contract, with some arguing that giving the MCG hosting rights until 2057 is unfair.

With its 100,000 fan capacity and its traditional role as hosts, the Melbourne venue is known to have an optimal atmosphere for the AFL’s most important day of the year. However, many believe that the AFL need to share the Grand Final venue due to the home-field advantage that Victorian clubs have.

Xavier Ellis, a former AFL footballer for Hawthorn and the West Coast Eagles, believes there is an undeniable benefit for Victorian clubs.

Ellis has plenty of Grand Final knowledge, having competed in three separate Grand Finals. The ex-footballer has experienced both sides and understands the issues non-Victorian clubs encounter when qualifying for the decider.

“It is irrefutable that Melbourne teams have the advantage, staying at home, sleeping in your own bed, routine, family, size and shape of the ground,” Ellis told upstart.

“For some players getting to the Grand Final with their family was a 10k weekend. [The] AFL need to find a way to offer the same support that naturally would be offered to Melbourne clubs. Some players lose money to play in the Grand Final.”

Six of the last seven premiers were Victorian clubs who defeated an interstate team at the MCG on Grand Final Day. It’s impossible to know whether any of these outcomes would be different if the game was played at another venue. However, it does pose the question: Does the league do enough to equalise the playing field for all 18 clubs?

Other Australian sporting competitions such as the A-League and the Suncorp Super Netball League allow the team who qualified first to host their final. American sporting leagues such as the NFL have the location of the Super Bowl moved around to a neutral venue on a year-to-year basis.

These are potential options that have been proposed by many who would like to see changes to the AFL Grand Final considered.

Despite the disadvantage interstate teams face, Ellis still believes that the league does a lot to provide a fair opportunity to all clubs.

“In terms of Grand Finals (GF), maybe [the AFL] are behind the A-League and NBL. NRL is in the same boat as the AFL playing the GF in Sydney every year. But in terms of true equalisation, the AFL lead the way with a tight financial cap – players, coaching and spending – and a draft process which provides each club with a fair opportunity to rise from the ashes,” he said.

“Look at the A-league, NRL and NBL who are on their knees more than the AFL, maybe these financial reasons for the Grand Final have saved the comp.”

The AFL thanked Queensland for all of their support this season with awarding the state the 2020 AFL Grand Final. The match will be played at the Gabba in Brisbane, hosted at night for the first time in history.

AFL journalist, Daniel Cherney believes the AFL made the right decision to select Queensland as the state to host the most important day of the year for the AFL.

“I think Queensland deserve it, it’s such an unprecedented year,” Cherney told upstart.

“The amount of effort that Queensland have given and the help they’ve done for the AFL to keep them afloat and the industry afloat, it’s only fitting. I think it would be unfair to reward another state that hasn’t helped as much as Queensland.”

Although the AFL decider will return to Victoria in 2021, the league made some serious changes in recent years to provide a fairer competition.

“When they re-signed the contract to 2057, there were some trade-offs there and the AFL allowed the non-Victorian clubs to train more at the MCG,” Cherney said.

“Fifteen years ago, the MCG had to host one final, every week of the finals, so you’d have lead up finals with lower-ranking Victorian teams against higher-ranking Non-Victorians so that was a big one that they stamped out.”

There may be a continued push from interstate clubs, coaches, players and the media for the location to be shared around considering the location change this year. However, it’s unlikely for anything to change anytime soon.

“At the end of the day, it’s a contract that the Victorian government will be very determined and clear that this is an extraordinary circumstance and a one-off,” Cherney said.

“The MCG has just about always been the home for the Grand Final and will continue to be … unless things change dramatically.”

Ryan Long is a third-year Bachelor of Media and Communications (Sports Journalism) student at La Trobe University. You can follow him on Twitter @ryanlong1297

Photo: 2017 AFL Grand Final panorama after final siren by Flickerd available HERE and used under a Creative Commons Attribution. The image has not been modified.