The AFL’s new “man on the mark” rule has been hotly contested this season, with fans and players fearful of its impact on the game. 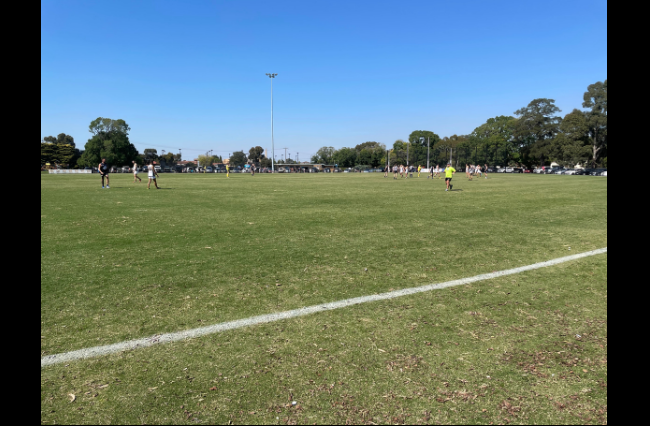 The AFL’s new “man on the mark” rule has been hotly contested this season, with fans and players fearful of its impact on the game, even copping criticism from an unnamed chief executive within the AFL. The rule forces a player on the mark not to move in any direction after the umpire calls “stand”. The punishment for breaking the rule: a 50-metre penalty.

Supporters were worried in the pre-season when Fremantle Dockers player Brennan Cox was penalised for a 50-metre penalty as West Coast Eagles player Oscar Allen was lining up for a goal. Clearly from the vision Cox wasn’t trying to deny Allen space as he moved off the mark.

But the oft-forgotten team who need to adjust to new rules and interpretations is the umpires. Andrew Talbot, Umpiring Growth and Development coordinator for AFL Victoria, says there is a lot of the time in the game when the stand call doesn’t need to be enforced at all.

“If the umpires allow it to just evolve and occur naturally, players are playing on a little bit quicker and that has been sustained. The rule is not enforced as much as people probably expected it to,” he tells upstart.

“Players with the ball feel like they can play on quicker and have a little bit more freedom to get the ball past the player on the mark and any defenders around the area.”

As with any rule changes that have been brought in by the AFL, Talbot says supporters and players “hit panic stations” before actually seeing how it impacts the game.

“’Oh, no, the game’s going to be ruined!’ The same can be said — I think it was 2018 — when there was nine rule changes and we actually had umpire grace in that that year,” he says.

Many pundits say defence has been killing the spectacle of the game over the past 15 years, with the ability of players to transfer the ball from the defensive 50 to the forward 50 being reduced by nearly 20 per cent. From the small sample size at the elite level, we’ve seen more run and space, with players willing to take more risks and play more instinctively, something many believe the game has been missing for more than a decade.

The AFL has previously brought in similar rules to improve the flow of the game. The third man up rule a few years ago, the 6-6-6 rule last year, and limiting rotations, were all designed to free up the game and limit stoppages.

The AFL’s plan seems to have worked, with most of the games so far being fast-paced and high-scoring. The statistics also prove it with 42 percent of scores coming from the backline, while last year’s was 36 percent. And there was only an average of 49 stoppages, compared to the average over the past five years of 63.

However, we’ve yet to see such benefits at the local level as the flow of games appear to be unaffected, with some saying that the new rule only confuses players and cause debate among amateur league administrations.

Most rules played at the elite level are adopted by amateur leagues. However, some competitions don’t take on everything. Epping Football Club President, Kirsty Stilsby, whose club plays in the Northern Football Netball League (NFNL), says the man on the mark rule shouldn’t be played at the local level where the players aren’t professional.

“They should have kept the game as it was, it’s difficult because the [Essendon District Football League] play the 6-6-6, but we don’t. We brought in a rule that’s come straight from the AFL. Probably another 12 months might have been easier on the players,” she says.

“We just need a bit more leniency on it, it’s hard, these guys have been out of footy for around 18 months. To come back here and have a new rule put on you like this, when it’s something you’ve done all your life it’s always going to be hard to adjust.”

This sentiment is shared across most local and country leagues. With the AFL constantly changing and tinkering with the rules every season, it takes a while for players to adjust. Stilsby says the rule hasn’t sped up the game like it has at the elite level and can become an issue when players play on instinct.

“It hasn’t made too much of an impact, other than … if you think a player is going to handball it, then it becomes an issue because the player will move and anticipate that,” she says.

Article and Photo: Dylan Brown is a third year Bachelor of Media and Communication (Sports Journalism) student at La Trobe University. You can follow him on Twitter @brownyy24