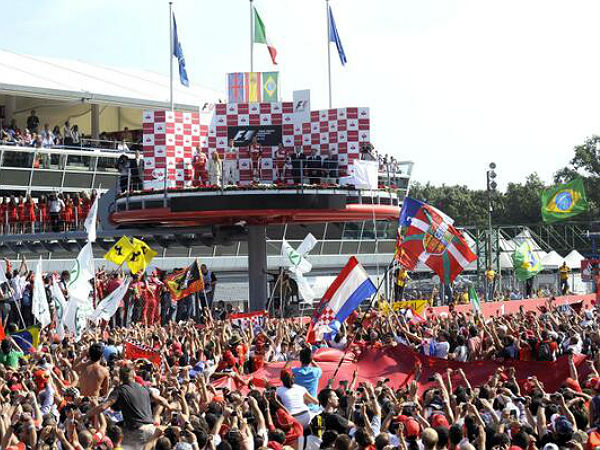 The legendary Spa-Francorchamps is a hard act to follow on the Formula One calendar – but if any circuit can, it’s Monza.

Known as ‘La Pista Magica‘ to the locals, or the ‘magic track’, Monza is one of F1’s great venues. It is on its own on the modern calendar as a genuine high-speed, low-downforce circuit.

With barely a handful of bends and chicanes, Monza’s layout is deceptively simple, however the simplicity is what makes it so difficult – teams and drivers regard it as one of the toughest challenges of the year.

Set in a royal park, the picturesque circuit is dominated by long straights but broken up by slow chicanes. It demands maximum speed via the need for minimal downforce.

There isn’t a track as harsh on both the engines and brakes as Monza, which has the highest average lap speed of any track at 250km/h and an astonishing top speed of 345km/h.

From a strategy point of view, Monza is relatively straightforward. It isn’t particularly harsh on the tyres, as there aren’t many fast corners that put high amounts of load on them. The two bends at Lesmo and the infamous Parabolica are the only ‘traditional corners’ on the circuit.

However, wheel rotation speeds are quite high and overheating of the tyres can become an issue, particularly if the track temperature is high, as it so often can be at Monza.

And picking a winner isn’t easy.

Because of the low-downforce nature of the track, it is a Grand Prix that many smaller teams have done well at over the years. In fact, many of the mid-to-lower pack teams dedicate a fair chunk of their resources to this race in the hope that a podium finish could attract extra sponsors.

Sebastian Vettel’s incredible win at Monza in 2008, in a generally inferior Toro Rosso, saw him become Formula One’s youngest ever Grand Prix winner, as well as cementing himself a spot next to Mark Webber at Red Bull for season 2009.

If there was one team the home fans would want to see win, it’s their beloved Ferrari. The tifosi will be out in force at Monza this weekend, turning the grandstands into a sea of red and a wall of noise that some drivers have claimed to hear over the top of their own engines.

We hope this happens again at Monza but with Felipe finishing second. Ferrari are coming home! #ForzaFerrari #F1 pic.twitter.com/G0iP0WfONx

Their main man Fernando Alonso desperately needs a win to chip away at Sebastian Vettel’s ever-growing 46-point gap at the top of the championship standings, and wouldn’t he love to do it in front of his adoring fans.

Monza isn’t a track Red Bull has particularly had much success at, but neither was Spa until Vettel claimed the race win last round. This is Mark Webber’s final chance to stand on the podium at the Italian Grand Prix, but he will have to put in an extra special performance, as he has never managed a top five finish at the famous circuit.

Kimi Raikkonen suffered a blow to his championship hopes last round, in Belgium, when brake issues forced his early retirement. However, the probable hot temperatures at Monza will suit both the Finn and his teammate Romain Grosjean, as their E21 is superb on its tyres.

Mercedes lost some ground to Red Bull at Spa two weekends ago, and Lewis Hamilton will be looking to close up the point’s gap and go back-to-back at Monza, albeit with a new team. His teammate Nico Rosberg has been more than competitive this year, with two race wins, and is a very good chance to stand on the top step of the dramatic start/finish podium at Monza on Sunday.

Toro Rosso’s Daniel Ricciardo could be forgiven for looking far beyond this weekend after he was announced as Mark Webber’s replacement at Red Bull for the 2014 season, this week. However, he cannot afford to relax as his teammate Jean-Eric Vergne would love nothing better than to show up the Australian and send a message to the Red Bull hierarchy that it may have made the wrong decision.

Monza is the last of the European races on the calendar before the Formula One circus heads off for the bright lights of the Singapore night race, for the second Asian leg of the season.