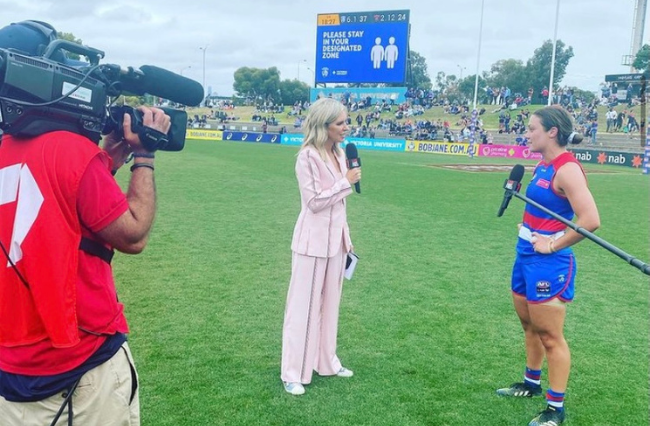 Channel Seven reporter Jacqui Felgate has worked in newsrooms for close to two decades, although more recently you might have seen her pacing the boundary of an AFLW game.

Sport and football have always been great passions of the Mitcham-born broadcaster. However, after graduating with a Bachelor of Arts in Political Science from Melbourne University, it was political journalism that became Felgate’s first love.

“I always thought that if I didn’t make it as a journalist, I would go into some sort of political advising,” Felgate tells upstart.

Keen to establish herself as a proficient writer, Felgate undertook work experience at several local papers including the Warrnambool Standard and the Leader, before completing a short stint at the Nine Network.

“I swore after I did work experience at Channel Nine that I’d never go into telly. I just wanted to do papers,” she says.

Later, during her university studies, Felgate decided she desperately wanted to be a copy girl for the Herald Sun.

Now recognised as an editorial assistant, a copy girl was employed to carry copy and run errands in the newsroom.

“I wrote to the Herald Sun every week for two years asking to be a copy kid,” she says.

After routinely hounding the woman responsible for hiring, Felgate was eventually offered a full-time job in 2003, which later transpired into a cadetship position in 2005 where she began working as the paper’s state political reporter.

“I’m forever grateful to the paper because I learnt how to be a great writer, which coming from a print background puts you in really good stead for whatever you choose to do,” she says.

Wanting more of an opportunity to break stories, an opening came up for Felgate to move across to television news after having her first daughter, joining the Seven Network in 2007.

“I remember when I went to Seven, they were saying ‘oh look we don’t really need any presenters, but we do need people who can break stories’, so I went over to do that,” she says.

“Then within six months [at Channel Seven], I was reading the news.”

Alongside the growth of professional women’s sport came a big push for a greater female presence in sports journalism, which Felgate was asked to head up in football-mad Melbourne by becoming the 7News nightly sports reader on weekends.

On top of that came stints on Talking Footy and the hosting responsibility of Footy Central, where Felgate continues to build her standing as a reputable face in football.

A devoted supporter of the Geelong Football Club all her life, Felgate was thrilled with the mix.

“You’re getting paid to talk about and watch football,” she says.

“Who wouldn’t want to do that!”

With the men’s and women’s football competitions not overlapping till March, Felgate can be seen interviewing players and announcing the headlines of a match from a different location—boundary reporting for the AFLW.

“Sitting boundary-side, you get a totally different perspective of the game itself,” she says.

“You can see just how skilled they [the women] are and what a great sport it is.”

However, being seated amongst the action can pose some unique challenges.

“Sometimes you’ve got to stop yourself from jumping up and getting too involved in it because when you’re on that level with them [the players] you feel like you’re right there and you’re part of it,” she says.

When asked if she would ever expand into other areas of commentary, Felgate was quick to say no on the basis that she lacks the in-depth knowledge of someone who has played the game.

“It’s not my job to analyse the game in that way. My job is to tell you the facts and the stories of the game,” she says.

While being recognised with a Melbourne Press Club Quill Award and two RACV Transport Quills for her outstanding work breaking stories throughout her career, Felgate says her greatest achievement was her appointment as the first female co-hostess of the Brownlow Medal last year.

“It was such a surprise,” she says.

Making the night even more exceptional, the event took place at the height of Melbourne’s second lockdown, meaning winner, Brisbane’s Lachie Neale, wasn’t even in the same state as Felgate and co-host Hamish McLachlan.

“It was such an amazing experience, but also one we would never do again because hopefully this year it will be back to normal and we’ll all be able to be in a room together somewhere.”