When Jaime Head pulled on the boots for her first game of footy back in 2010, she couldn’t have guessed where she would end up, Brayden May writes. 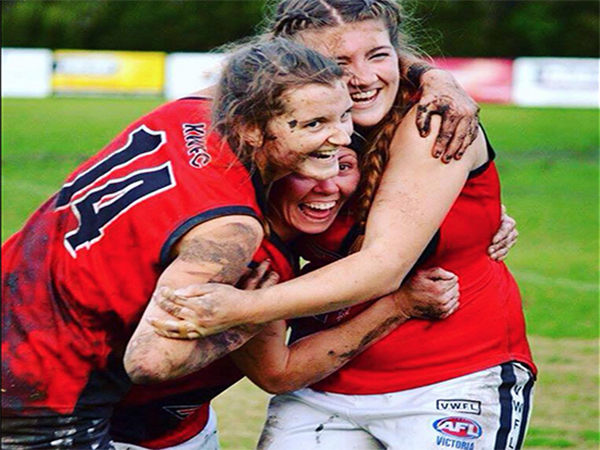 Six years later, the 19-year-old has gone from being a part-time fill-in to hoping to get a chance in the new women’s AFL competition beginning next year.

“As a child I never thought that AFL for women would be there, I’m more than excited to try and get there, to make the AFL one day would be amazing.” Head says.

The lifelong St Kilda fan has never been hard to miss on the football field.

Nicknamed “Little”, Head arrived on the scene as a 13-year-old, smaller than the rest of her team mates aged in their mid-20s.

But now Head is one of the tallest members in the Knox Falcons lining up in arguably the most physically demanding position on the ground, the ruck.

The budding star points to Falcons’ captain Melissa Kuys as her inspiration right throughout her young career.

“She has been a massive inspiration to me the whole time”, Head says, “I would love to be able to be like her and play the way she does”.

Currently studying Exercise and Sport Science at Victoria University, Head has experienced the highs and lows football has to offer since playing her first match.

Rewind to 2012, where the young Knox star and her teammates were on top of the world, having won their first grand final as a club.

“It was just the most amazing feeling; all I could [do] was just cry…I kicked the first and last goal of the match with one in between, so I was pretty happy with that.”

Until the end of 2015, the part-time factory worker was juggling two sports, playing basketball for the Dandenong Rangers under-20s representative team in the Victorian Championship, the highest level of junior club basketball in the state.

“I could have tried out for the youth team (under 23), but in the end I decided football was a better option for me.” Head says.

A decision which paid off as Knox entered the Women’s VFL competition for this season, the highest level of competition for women in the state, which was only established at the beginning of this year.

Head is loving the new league, “It’s awesome that we are finally moving up, I see it as a massive stepping stone for women’s sport.”

The Falcons have only won one game so far this season, but Head is learning a lot from the premier clubs in the division, describing them as being very professional in the way they go about their work.

“I aspire to have our team like that, playing football at a good level with no strings attached.” Says Head.

Playing in the VFL Women’s competition has allowed Head to play against some of the best, including Moana Hope, who Head described as amazing.

Everything about the step-up in competition has meant a change around the way things are run around the team says Head.

“Training is a lot higher intensity… we want to develop as a team and we know we have to do the hard yards to get there.” She says.

The former basketballer could be faced with a tough decision if she was selected by an interstate side.

“If I got given an opportunity, I would probably move anywhere.”

Brayden May is a second-year sports journalism student at La Trobe University. You can follow him on Twitter @braydenmay