The four-time premiership player reflects on his life and career so far. 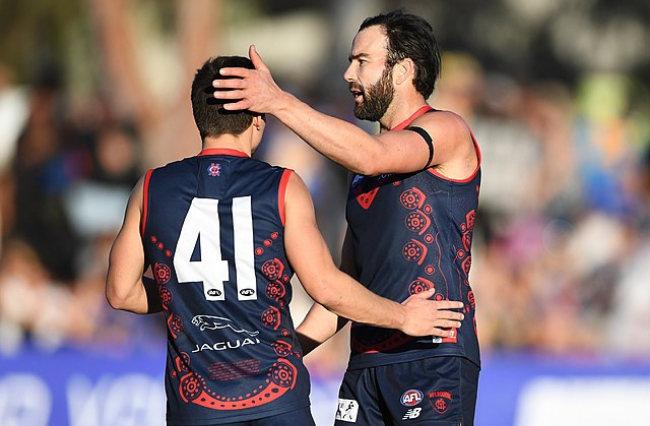 Just as the Hawthorn Football Club is known as the “Family Club”, Jordan Lewis is known as a family man.

It isn’t hard to tell, as he sits ready to be interviewed in his children’s playroom. Colourful drawings are stuck on the walls. Toys are scattered everywhere and footy badges of Dad are pinned to a board.

It’s slightly ironic that the four-time premiership player is actually in here “escaping from the kids for a moment”.

Lewis has three young sons with wife Lucy, who he’s been married to for over six years. His own fond memories of family begin way back when he was a three year old kid in Warrnambool, watching his father play local football.

“[I’d] watch him play and then once the game had finished, … we’d be out kicking the footy until the lights were turned off,” he tells upstart.

“I just really loved that moment in my life.”

Since retiring from his professional career, Lewis has gone into journalism, working for Fox Footy covering the AFL. His decision was made with his family in mind.

“I just thought … how do I stay in football but still devote some time at home? And the media just fitted that perfect balance for me.”

However, part of Lewis’s job as a journalist is to comment on his former AFL teammates. This is something that doesn’t sit easily with him.

“I’m not comfortable doing it and I suppose when you do it you’ve gotta stay true to yourself,” he says.

“I’m not one for creating headlines or being a part of … clickbait. I think there’s a respect that you have to show the players.”

Lewis has exchanged light-hearted messages with some former teammates such as Luke Breust, Isaac Smith and Jack Gunston after mentioning the potential for them to be traded to other clubs in the media. He feels that if the situation deems it fit, at the back end of their careers these players deserve the opportunity to join a new club.

“From my point of view, if you’re at the end of your career and [you’re in] a side that might not have success in the period that you’ve got left in your career, I think you’re well within your rights to maybe go to a new environment,” he says.

This is what Lewis did after 12 years at Hawthorn, when after the 2016 AFL season his footballing career was abruptly turned on its head.

“I get a text from Clarko (Hawthorn Coach Alastair Clarkson) to say can I come over and that’s when my mind started ticking,” he says.

“This could be a potential meeting to see me out.”

After negotiations between Hawthorn and Melbourne, Lewis found himself switching the brown and gold with red and blue for the last three seasons of his career.

Despite the short stint at the Demons, Coach Simon Goodwin said Lewis left a “significant legacy” at the club. Lewis speaks quite fondly of his time there.

“I was really pleased to play a part in getting them back to playing finals … we played some good football” he says.

Melbourne played finals in Lewis’s second year at the club, knocking out his former side Hawthorn in week two, to progress to a preliminary final.

“That was good fun!” Lewis says with a laugh.

Despite his enjoyment of a victory against the old mob, Lewis says he is a Hawk at heart and speaks very highly of the club and the people that were there in his time at Hawthorn.

“Clearly the person and organisation that has shaped me the most would be the Hawthorn Football Club and Alastair Clarkson,” he says.

In 2004, the club had just avoided last spot on the ladder by one percent, sacked its head coach and dealt with a drink driving scandal involving multiple players. You’d be forgiven for thinking there’d be some trepidation on Lewis’s part as he joined the club, but it wasn’t the case. “My mindset going in there, it was just pure joy. I’d finally realised a dream, come from Warrnambool and been drafted to a side with two friends,” he says.

“For me, how bad they were performing and what had gone on in the past, it didn’t affect the way I thought about the club.”

When Clarkson took the reins, he immediately implemented a pre-season trip to help unite the group and change the culture of the club. The expedition involved trekking the Kokoda trail, a physically demanding hike in Papua New Guinea.

“Within a week at being at Hawthorn we had to get a passport, we had to get on a plane and we headed straight to Papua New Guinea,” Lewis says.

No one had been there before and we really had to bond over walking 96 kilometres. So that for me was a great opportunity to get to know the senior players.”

Lewis speaks glowingly about how the club develops its people off the field.

“The club itself had a real emphasis on when you came into the club to when you left the football club; they wanted to make you a better person, a well-rounded person and a big part of that was humility,” he says.

“And that was really driven from the top from Clarko and the CEO and President,” Lewis smirks as he ponders including Hawthorn President Jeff Kennett in this group.

“Jeff Kennett can be probably not humble at times but certainly he’s had a big influence on that club as well,” he says with a laugh.

Lewis has made some really strong relationships over his journey in the AFL, potentially the strongest bond he’s made is with former Hawthorn teammate Jarryd Roughead.

“When you spend 14 years together every single day you can’t help but to feel sort of that brotherly love, I suppose … and we’ve rested on each other’s shoulders through good times and bad,” he says.

Roughead went through a cancer battle in 2016, and Lewis was with him every step of the way.

“Being in there when he had the treatment … you just create a really deep sort of bond,” he says.

When Lewis eventually hung up the boots after a 15-year career, he says it was “really special” that Alastair Clarkson joined Simon Goodwin and himself when he made the announcement.

“They’ve both played big roles in my football journey and life as well,” he says.

“It was unique, but it just meant so much.”

Story: Tarquin Oakley is a first-year Bachelor of Media and Communications (Sports Journalism) student at La Trobe University. You can follow him on twitter @TarqOakley.

Photo:  “Jay Lockhart and Jordan Lewis celebrate a goal.jpg” by Flickerd is licensed under CC BY-SA 4.0