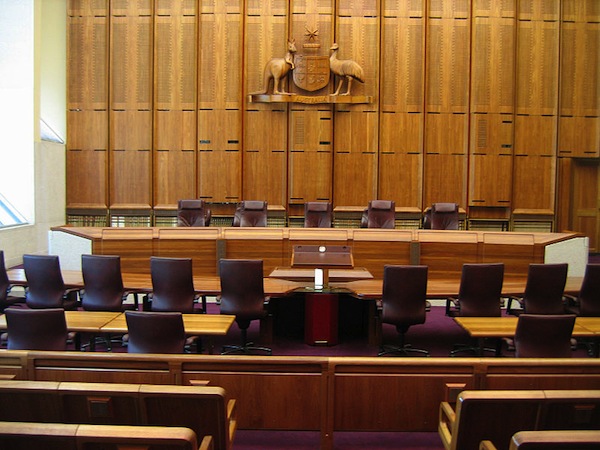 Premier Denis Napthine has made a promise to the people of Victoria. It doesn’t have anything to do with schools, hospitals or public transport.  This promise has to do with justice.

Napthine told the Herald Sun that Hoddle St killer Julian Knight “will never be released under my watch”. The statement came as the Adult Parole Board said there is no chance of Knight’s release in the foreseeable future. He will be eligible for parole in May 2014.

The premier’s comment raises a question of the relationship between the political and judicial systems in the state and in the country.

The ‘separation of powers’ principle is central to Australia’s functioning. It states that judicial, executive and parliamentary roles must not be intertwined. But what does this mean in reality? A premier or a prime minister should not be able to decide what happens in the country’s court systems – the very thing that Napthine is hinting at.

According to Professor Cheryl Saunders AO, of the University of Melbourne, the principle has great value.

“Separation of powers is one of the very few checks and balances in the Australian Constitution,” she says, adding:

“Governments very often have a habit of saying ‘this is what we stand for’ but the reality is that some things, and depriving people of liberty is one of them, can only be done though legislation.”

When it comes to the relationship between parliament and the courts, it seems that there is a disparity between what should be and what is. Evan Whitton – journalist and author of Our Corrupt Legal System: Why Everyone Is a Victim (Except Rich Criminals) says that the whole thing is out of balance.

“Politicians should act in the best interests of the people, including taxpayers who fund the legal system. That would require a change to the justice system, but there will be no real change until the percentage of lawyers in the legislature reflects their percentage of the population,” he says.

Journalist Nick Calacouras wrote back in 2010, when the Northern Territory’s Country Liberals wanted power over parole, that “keeping departments and agencies at arms length allows for unpopular decisions that a politician could never make. Such as parole.”

In Whitton’s eyes, our current judicial state is a polluted one.  While corrupt may be a harsh word, the boundaries have become blurred. Premier Napthine’s comment sounds very similar to political campaigning, but highlights the ever-changing relationship between the law-makers and the law-enforcers

Separation of powers has long been referred to as a key element of how the country is run. But on a day-to-day level, we don’t really take notice of it, so why should we care? Despite its supposed irrelevance, it is one of those things that we take for granted.

Simply put, this separation of powers is central to a person’s right to justice. When it isn’t in place, we find ourselves on a slippery slope from which we may not recover.

As Saunders says, complacency is the greatest check that the separation of powers principle is in place.

“If you had come out of the system that didn’t have a separation of powers – so concentrated all power in a single government institution – then you would know what it would be to have you liberty threatened.

“It is only if we actually have the benefit of being able to be complacent about the separation of powers and the rule of law that we can ask those rhetorical questions,” she adds.

While faith in the government at both a state and a federal level may be wavering, our faith in the court system must not. If the ‘separation of powers’ principle is ignored, we  will no longer be able to trust the courts and the parliament to remain independent. And as Saunders points out, we may not realise until it’s too late.