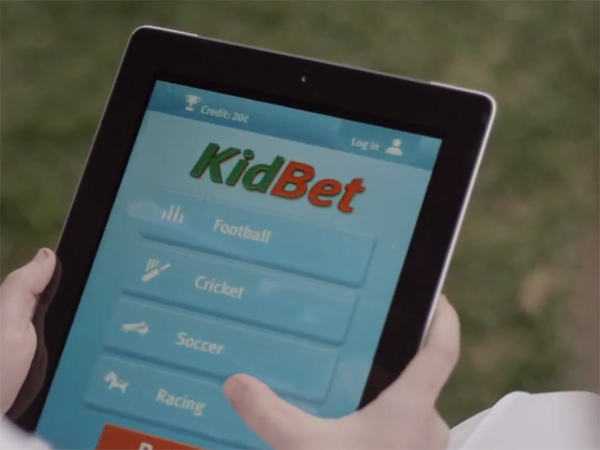 It’s almost impossible to ignore the presence online gambling has in today’s sport.

It seems like every program on a commercial network features live odds on a game, just in case you’re in the mood for a flutter. There are odds and advertisements before every bounce and during each break, not to mention the lucrative “money-back” and “exotic”specials on offer.

Who can resist throwing $20 on the first goal-scorer when we’re constantly being told to “Fire up with a Centrebet”?

Or as KidBet advertising company puts it – “Watching sport is all fun and games. But if you want real excitement, you’ve gotta put it on the line.”

The commercial states “one in five adults with gambling problems started gambling before they were 18” – the legal age for betting in Australia.

This correlates to another comment in the advertisement: “teenagers are four times more likely to develop gambling problems than adults.”

There’s a clear reason why this is the case.

Generally, teenagers have no real concept of financial responsibility – there’s no electricity bill to pay, no mortgage or rent, and no family to be concerned about.

McDonalds mightn’t pay much but it’s all – for the most part – disposal income; the money gambled, and lost, doesn’t carry any real weight. At the end of the day, it’s just a bit of fun and having a punt is well and truly a part of Australian culture.

However, this attitude towards betting on sport means Australia has become an appealing prospect for international gambling companies.

A recent study shows that Australians lose more money per capita than anyone else in the world.

As a number of betting agencies have begun to flood the market, KidBet’s claim that “spending on sports betting television advertising has increased more than threefold between 2010 and 2012” is particularly concerning, especially when it comes to teenagers.

Overseas studies have found gambling ads to be highly effective at luring teenagers into having a punt, so such an influx of ads might just be what pushes a young fan into making their first bet.

Unfortunately, it’s the product of a symbiotic relationship developing between sports media and online betting agencies.

“There is a lot of hypocrisy in sport,” says Paul Delfabbro, Associate Professor at the University of Adelaide and the author of numerous reports focusing on gambling in Australia.

“They crack down on players making small bets and yet accept a lot of sponsorship money from big wagering operators. It is very hard to emphasise responsible or safe gambling messages when you are receiving income from organisations that want people to gamble more and more.”

Perhaps media outlets know that pumping their young fan bases with gambling messages is wrong, but if it’s what pays the bills, consciences can be silenced.

To its credit, the Gillard Government took some positive action on the issue by banning the advertisement of odds during live games, however, it hasn’t seemed to hamper betting agencies.

In reality, more advertising is being diverted to the pre and post-game shows, as well as during every break possible.

While this is far from a new problem, hopefully the KidBet campaign can bring the issue into focus for parents around the country.

Establishing the right mindset to watching sports with children is becoming vital for parents, who should ensure that the only “lines” kids are concerned about are the ones on the pitch.

“If you know that you can’t really win over a longer-term and that it’s big business, then young people will be better informed to make the right decisions.”

Realistically, gambling is an institution in this country, a fact unlikely to change any time soon.

By law, once you hit eighteen, it’s fair game for an individual to spend their money how they wish.

But measures need to be taken to stop betting agencies from suckering kids into wasting their money, before they know what’s best for them.

We owe them that much at least.