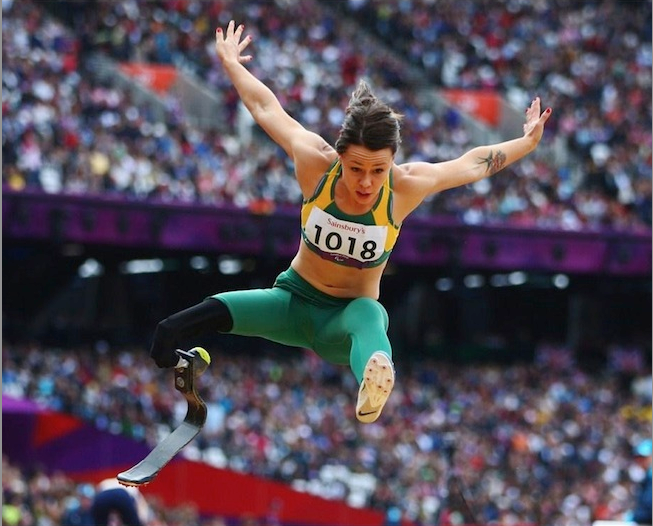 At the age of 15, Kelly Cartwright had to make a choice — either amputate her right leg or undergo radical surgery and risk cancer claiming her life.

I sat down with the Australian Paralympian to hear her incredible story.

Let’s start at the beginning. Cartwright grew up in Geelong, and was the typical, sports-loving teenage girl. She played netball for her local club and had her sights set on, one day, representing her country in the sport.

But at the age of 15, the course of Cartwright’s life was drastically changed.

After suffering what was thought to be growing pains for two years, Kelly was told by her doctor that she had a cist in her knee, and would need to undergo surgery to have it removed. But, just ten days later, Cartwright received a call of quite a different tone from her doctor.

“He told me that he had some bad news and that I should bring my parents in to meet with him,” says Cartwright, retelling the words that have no doubt been played over and over in her mind since that day.

It turned out that that ‘cist’ was actually cancer. And a very rare form of it, called synovial sarcoma. So rare, in fact, that only 1 in 3 million people are diagnosed with it.

“My first thought was: Am I going to die?” says Cartwright, without flinching at the words.

“They gave me two choices. The first, was to have my leg amputated 4 inches above the knee. The second was to undergo radical surgery to try and remove as much of the cancer as possible. The surgery would involve skin grafts and plastic surgery, and the cancer might still return.”

With only five days to make her choice, Cartwright eventually decided to amputate her leg, in order to give herself the best chance of survival.

At this point in the interview, I’m left sitting in awed silence, unable to comprehend how someone would go about making, what would literally be, a life changing decision at such an early point in their life. Cartwright merely smiles at my shock and reassures me that the decision was not made quickly or easily.

“Initially I said I’d rather die than have my leg amputated… Even on the day of the operation, in the car ride there, I begged my parents to turn the car around, that I’d come back another day, I just didn’t want to do it that day,” she says.

After undergoing the operation, Cartwright spent two weeks in the Oncology Ward at the Royal Children’s Hospital and drew her strength from those around her.

“What kept me going was that, here I was, two weeks later, walking out of there. There are kids in there who are never going to get to leave, so I saw myself as one of the lucky ones.”

Since the amputation, Cartwright has gone on to achieve incredible results, both on and off the athletics track.

Her Paralympic dream was first sparked at a Paralympic talent search that she attended in year 11. Until this point, Cartwright had never even contemplated the Paralympics, but was inspired by other athletes with disabilities that she met. It was here that she met, and became inspired by her current coach, Tim Mathews, a Paralympic medallist with just one arm and one lung.

Cartwright attended the 2008 Beijing Paralympics, just scraping into the 100m final, but tells me that it wasn’t until after her race, when she was sitting in the stands watching an Australian receive a medal, that her determination came alive.

“When I saw them on that podium, and I heard the national anthem, that’s when I knew I wanted to dedicate my life to this.”

However, her road to the London Paralympics was marred by injury. In 2009, her amputated leg had become so damaged that she couldn’t even walk on it, let alone run. Cartwright, however, refused to give up. “Stopping wasn’t an option. I was going to London” she tells me, the competitive spark shinning in her eyes.

The decision was made, that the only way for Kelly to be able to run again, was to re-amputate. But with world championships just five months later, and Cartwright needing this event to qualify for London, the odds were stacked against her.

Cartwright was back in the gym just three weeks after her re-amputation, and by the time London rolled around, it all became worth it. Cartwright took home a gold medal in the long jump, setting a new world record in the process, and added a silver medal to her tally in the 100m metres.

“To stand on that podium, with my family and my coach somewhere in that crowd, and to hear our national anthem played, it truly was a dream come true,” she says with a reserved smile, assuring me that the cliché was the only way to describe such a moment.

Pic: look at this awesome pic of Kelly Cartwright (AUS) flying through the air for her Long Jump F42/44 gold #Athletics pic.twitter.com/1gH6hy0o

Despite all her success, and everything she has overcome, Cartwright says that, for her, the biggest obstacle she had to overcome was being okay with being different.

“There’s days where I want to get out of the car, have a pair of pants on, and not be the person that everyone stares at,” she admits to me, almost guiltily. Cartwright explains how she was plagued with insecurities when she first returned to school. She would wear her brothers school pants over her prosthetic leg on 40 degree days, just to avoid the stares of others. She says that she has sport to thank for giving her her self confidence back.

Sport helped Cartwright come to terms with the fact that she can’t change the way she is, so she might as well make the most of what she has got.

When asked about having any regrets, Kelly is silent for a few seconds as she considers. Finally, she replies with: “No. None. I wouldn’t change it for the world. If I didn’t make the choices and sacrifices that I did, I wouldn’t be where I am today.”.

Hannah Matchett is a first-year student in the Bachelor of Journalism (Sport) at La Trobe University. You can follow her on Twitter: @matchett_hannah