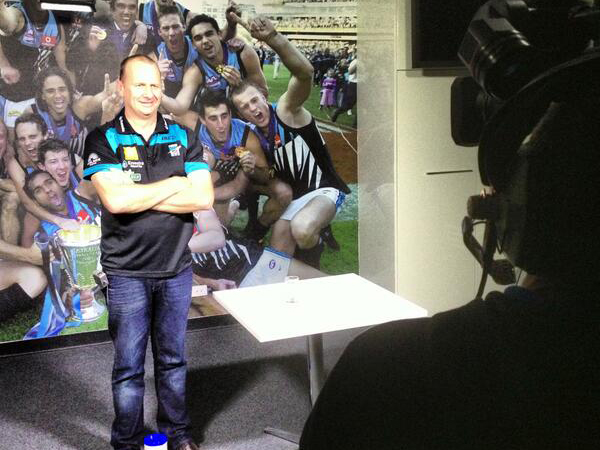 Week one of the 2013 finals series was full of surprises, with arguably the biggest upset coming on Saturday night when Port Adelaide knocked Collingwood out of the premiership race.

The Magpies had 25 more tackles, 15 more inside 50s, six more contested possessions and four more clearances, yet the Power won the elimination final by 24 points.

Why? Structure and efficiency.

Port incredibly produced 27 scoring shots from 43 inside 50s, a conversion rate of 62.8 per cent, and took a club record 27 intercept marks.

The marks really do tell the story of the night. While the Pies had their opponents under siege for lengthy periods, the boys from Alberton were able to absorb the pressure through steadfast defensive setups.

The performance further strengthened Hinkley’s already undeniable case for coach of the season.

He took on a monumental challenge when he accepted the head-coaching role in October last year. Port Adelaide was a basket case, both on and off field.

The club’s issues ran so deep that multiple candidates, including Leon Cameron, Rodney Eade and Brett Ratten, reportedly knocked back Port’s top job. Undaunted by the task at hand, Hinkley was strong and assured.

“Sometimes these things happen and there is a reason for some people to come out on top at the right time,” Hinkley said at his unveiling as senior coach.

Hinkley’s mantra was clear from day one, focusing on aerobic fitness and contested possession. Darren Burgess was installed as the high performance manager to lead the physical training, while former Carlton assistant Alan Richardson was recruited to be the director of coaching and strategy.

Smashing the Demons by 79 points, the Power sent out a message of intent and carried on the momentum by winning its opening five matches of 2013.

Dominant final quarter efforts quickly became a trademark. Port won 15 fourth terms during the home and away season, on the back of Burgess’s fitness regime and Hinkley’s unwavering demand for hard work.

It was no coincidence that Port came from three points down against Collingwood halfway through the final quarter to register the final seven shots of the game.

When judging the best-performed coach, consideration must be given to how far the team has improved in 12 months. No team has improved further in that time than Port Adelaide, and Hinkley’s fingerprints are all over the resurgence.

Anyone that suggested Port Adelaide would play finals six months ago would have been openly jeered and mocked. The equivalent right now would be to suggest that Melbourne will play finals in 2014, a fanciful idea at best.

The Power has not only defied the odds to reach its first finals series since 2007, it has moved into the second week and toppled a Collingwood side with 340 games of finals experience – the most of any team in the competition.

The Allan Jeans senior coach of the year award, adjudged by the 18 senior coaches, must surely go to Hinkley.

However, for Hinkley to be named the All-Australian coach of the year, he must pull off the utterly miraculous and steer Port Adelaide to the premiership.

Terry Wallace in 1998 was the last coach to receive the award for a team that failed to win the flag. Since 1999, the criteria has stipulated that only the premiership coach can win the award.

The logic is completely flawed.

It would be like denying Gary Ablett or Dane Swan the opportunity to win the Brownlow medal because their sides will not feature late in September.

Surely the All-Australian coach should be decided by the same criteria used for the Allan Jeans award – “having regard to [the] prior season’s performance, available resources, player talent and team management.”

On that basis, and barring a miracle from Mick Malthouse’s Carlton over the coming weeks, Ken Hinkley is the coaching king of 2013.

Paul Bastin is a Bachelor of Media Studies graduate from La Trobe University. You can follow him on Twitter: @paulbastin10.