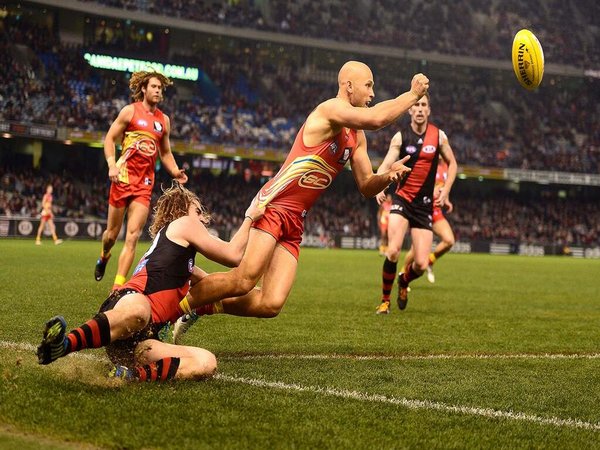 Throughout the AFL season, the upstart team is going to bring you the talking points from the weekend that you might not yet have considered and probably aren’t going to like.

Barring a serious injury or uncharacteristic suspension, Gold Coast’s Gary Ablett should become the first player in over 40 years and fifth in AFL/VFL history to claim a third Brownlow Medal as the league’s best & fairest player.

Ablett averages 32 disposals a match as a Sun, nearly half of which are contested. Only once has he recorded less than 19 possessions in 62 matches at the Gold Coast, and has amassed over 30 touches in two thirds of those games.

What sets him apart is sublime ability and consistency. He is so unstoppable that opposition teams now strategise to not tackle him and instead corral his movements.

When his team wins more games than ever before this season, Ablett is a certainty to poll.

Unlike Ablett, his main foes, ex-teammate Joel Selwood and Collingwood captain Scott Pendlebury must contend with their counterparts ‘stealing’ votes from them.

The Suns’ skipper is an umpire’s favourite – with 75 votes in three seasons at the Gold Coast – and has always polled well on Brownlow night with the fifth highest votes tally of all time.

Ablett is undeniably the AFL’s best player and when confirmed as the best again in 2014, the long-running argument over who is the best Ablett to play the game will be settled once and for all.

Carlton, North Melbourne and Richmond will not appear in September

Pre-season optimism leaves almost every club believing, hoping or dreaming they have what it takes to win the flag in the weeks leading up to round one. For many clubs, a reality check is needed and perhaps a 2014 finals berth is more realistic.

There genuinely seems to be 13 teams who could or should feature in September this year, but this column believes Carlton, Richmond and North Melbourne will be watching the finals action from a beach bar in Bali.

Last year’s four preliminary finalists are safer than Jeremy Howe winning mark of the year, while West Coast’s new coach Adam Simpson should entice the talent out of the list at his disposal.

Port Adelaide should prosper after a stunning elimination final upset last season, while the return of Taylor Walker to a forward line already stocked with tall (and talented) timber should help the Crows recover after a dissatisfying 2013.

Carlton coach Mick Malthouse is slowly realising his list won’t take him to a premiership in the near future, and the Blues’ ‘premiership window’ may have been slammed shut for the time being.

The Blues have only three A-grade stars (Murphy, Simpson and Kreuzer), but rely too heavily on the unreliable Jarrad Waite and are two key talls short of worrying the best sides.

North Melbourne has mental fragilities which must keep Brad Scott up late at night and like the Blues, lacks depth and a defensive game-plan needed to regularly challenge teams above it.

Collingwood will recover after its embarrassing round one showing but Richmond is the best chance to sneak in to the top eight at one of the aforementioned clubs expense, however should finish in its dreaded ninth position.

The best way to beat the Magpies is (in theory) simple, restrict their goliath Travis Cloke by double-teaming him for four quarters.

Fremantle proved this philosophy to be true on the season’s opening night, by stopping Cloke from being one on one with his opponent with more than 15 metres of space on any occasion.

Admittedly the delivery inside 50 to Cloke from his midfield was slow and high on almost every occasion, but the manner in which Michael Johnson and Zac Dawson aided Luke McPharlin was an exceptional display of team defence.

The trio made sure the colossal Cloke had to outmuscle more than one Docker in every marking contest, by being prepared to leave their direct opponent and ensuring they affected the contest every time, or disrupting the space Cloke could lead in to.

From 47 inside 50s against Fremantle, the Pies managed just five goals and nine marks inside 50. Cloke didn’t trouble the scorers in either of these categories.

Cloke was the most targeted player inside 50 in 2013 and finished runner-up in the Coleman Medal with 68 goals. Without his dominance, Collingwood will struggle to kick a winning score.

After the victory over Sydney that was bound to eventuate one day, the defenders of the AFL are beginning to fear the GWS forward line far earlier than they thought they must.

When coach Leon Cameron announces that his man-child full-forward prodigy in Tom Boyd is ready to pull on the orange and charcoal, he will have a welcome problem on his hands – too many key forwards.

Jeremy Cameron’s 62 goals last season asserted him as the Giants’ most capable forward target both on the lead and at ground level. Boyd will start deep in the forward line when given his chance, as he has proven at TAC Cup level and in the reserves that he has more presence than most rookies and must refine the craft he knows best.

With ruckmen Jonathan Giles and new recruit Shane Mumford to drift forward as part of the modern day ruck rotation, there is no room for a third specialist key forward.

The Giants’ biggest deficiency lies down back, and Patten’s mobility, strength and size would compliment Phil Davis in containing the teams with numerous key forwards, such as Hawthorn, Sydney and West Coast, in the years to come.

Either as a temporary swingman or permanent move, list manager Stephen Silvagni needs to head down to training to teach his charge the art of defending.

Do you agree with Justin? Or is he dead wrong? Let us know in the comments below!