Ben Cuzzupe applies the theory of political capital to all 18 AFL coaches to see whose leadership will get them through the year. 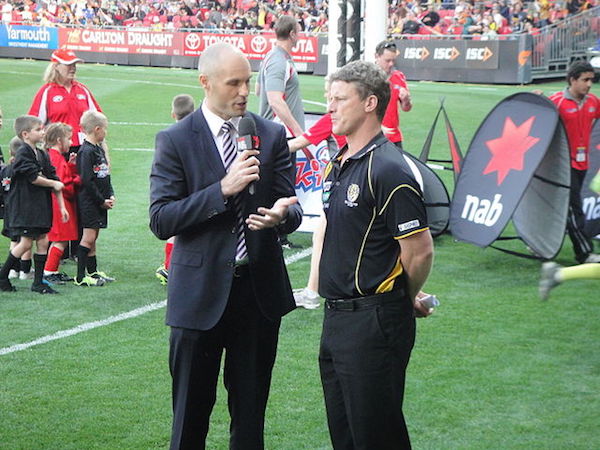 In order to get something difficult done, you have to make a sacrifice.

That’s exactly what Prime Minister John Howard did during the 1998 federal election, when he went ahead and campaigned on implementing the GST. He ended up sacrificing 18 seats to the ALP.

Howard cashed in his chips of political capital, the invisible form of currency that all leaders have.

The more capital you have, the easier it is to implement ideas on your timetable with limited scrutiny and patience from the general public.

The success – or lack thereof – of that implementation can win or lose it for you.

The longer time goes on, the higher the expectation to deliver on the bigger picture. Other factors like the perception of competence and keeping anticipation on a gradual climb work in your favour.

This theory can be translated over to the AFL.

In the current era of the 18 team competition and multi-million dollar football departments, building a premiership team almost requires the organisational structure of cabinet government.

Think of all the arms and legs in the modern football department as individual portfolios – list management, scouting, tactical analysis, conditioning and medical, specialist coaches.

The coach is the ideological figurehead, the driver of the vision of that will deliver a team a flag. Each club has different policies and methods, but they’re all striving toward the same goal – success through results.

Like political leaders, senior coaches will be blamed even if it’s not an area they’re responsible for.

Someone was rushed back from injury before they weren’t ready? Coach was acting on medical advice. An obscure opposition tactic surprises on game day? One of the scouts didn’t do their homework, but it’s the coach’s fault.

Measuring the success and importantly the job health of political leaders is easy. Polling shows us how much political capital someone has.

With a senior AFL coach, it’s harder to pin down how the tenure is going.

So it’s time to take a look at the job health of 18 the AFL coaches heading into the 2016 season, and just how much coaching capital they have to spend.

Political capital is intrinsically linked the concept of time and expectation. No one expects Don Pyke to lead the Crows to a miraculous premiership, right after they lose their best player and in year one of a new regime.

Pyke has to begin addressing the gap between Adelaide’s best and worst players, and list management is a prolonged and lengthy process.

It’s called a honeymoon period for a reason – the hard yards are yet to come.

Despite being dealt a rough hand with young players heading for the exits, 2016 can’t be another year of routinely non-competitive outings for the Lions. Think of it this way – in 12 months, confidence in his long term plan will be harmed if it’s another wasted year with zero improvement.

Coaches have to plan for missteps and bumps along the way. If you lose too much confidence of the supporter base before the climb up the ladder begins, you’re leaving yourself a limited margin for error later on.

Everyone has two or three years of minimal improvement in the lifespan of chasing a flag. You don’t waste them while you’re down the bottom.

Rides the wave of the honeymoon period, although considering potential supporter impatience and the rolling media hype of a well-supported team, things could spiral out of control later down the track. But in the short term, he’s got street cred (Clarkson) and hopefully a season of good performances with limited results will temper any premature expectations.

Should have more credits in the bank than what one should have at this phase of a rebuild, but is structurally undermined by three key aspects – Collingwood’s status, media hype and the big mouths of management. If he successfully uses the mid-table logjam to his advantage and artificially inflates their finishing position, he can buy himself some breathing room.

An entirely baseless prediction – Essendon will replace Worsfold in a season or two with a vibrant and youthful candidate, once the toxic reminders of James Hird’s reign are confined to the trash heap of history.

Worsfold in terms of style and list management will have little say in what Essendon’s next premiership will look like, but he by no means still has an important job. He has to protect the confidence of the Laverde’s and Daniher’s, making sure that dispiriting seasons don’t ruin them as footballers.

In politics, there’s nothing more important than saving the furniture.

Lyon’s brand is entrenched within the football psyche – pragmatic and based around the end game of delivering results. After this season, Fremantle will need to continue its facelift or falling out of contention becomes a reality. While patience won’t run out for a while, confidence has waned significantly. The lack of key position investments and continued late September catastrophes makes even the most true believer in Lyon’s cause worried.

Supposed if you hypothetically spoke to any leader of the Liberal Party after Robert Menzies, they’d tell you there’s nothing worse than being the hard act to follow.

Despite being a premiership winning and relatively good coach, Scott has never shaken a perception of being in the right place at the right time. Which is extraordinarily unfair, as he’s made the hard calls and tried to keep Geelong competitive while transitioning to a younger team.

The acquisition of Patrick Dangerfield was a signal of intent and boost for his credentials. The stage awaits for another shot at glory.

His appointment is based on being a disciplinarian and authority figure, in order to shape an AFL standard environment. Add to that the relative obscurity of the club and he’s a year and a half away from copping any serious heat.

Gradual improvement and new club status means Cameron will unlikely cop heat if GWS get lost in the mid-table logjam and miss finals. Introduced an attacking edge to the Giants in 2015 and with a fit list, should be able by season’s end to sandbag against swings in momentum.

Clarko not only gets maximum points for results and effort, but even tactical style and aesthetic. Depending on his level of interest and ability to stay motivated, he’s probably the leading candidate to take Hawthorn through another rebuild after this window closes.

Now in the conversation as one of the all-time greats.

It’s all about that ‘L’ word for Roosy – legacy.

While the base is pleased in the direction of the list and the beltings have stopped, the element of winning and executing eludes them. Roos only has the capital of a ‘lame duck’, but like most leaders in that position, they have one final vanity project that will be forever tied to their legacy.

Paul Keating had the republic. For Paul Roos, it’s getting the Dees into winning positions and hoping that the lessons of the last three years do the rest.

Scott’s tactical errors between 2012 and 2015 burned through way too much goodwill he’d prefer to have heading into this season. Successive strong finals victories won some of it back, but a poor start to the season and rough second half of the fixture leaves it all dangling on a knife’s edge.

Has to be in the top six by the bye.

Going into 2015, Ken Hinkley could write the length of his own contract. Going into 2016, the situation is a bit more complex. The opposition found a way to pull the pin on Port’s run and gun style and he’s lost a cog in Paddy Ryder. However, Hinkley still has a considerable amount of wiggle room in making wholesale tactical changes.

He probably could get away with another season outside the top six, but considering how quickly expectation inflated early on, it’d probably turn 2017 into being more make or break than it should be.

Like Brad Scott, Hardwick has no room for error. Seven years in and its win now. A significant patch of poor form without results could dismantle confidence in the entire project. Considering the logjam of teams from third to twelfth, Richmond have to focus on engineering an ideal finals spot before dealing with exorcising the ghosts of finals past.

In an ideal position thanks to some brilliant club marketing and a solid 2015. The Road to 2020 campaign has produced a faraway reference point that shields him from short term criticism. Add in the fact St.Kilda are producing football that has substance and is engaging, most will keep looking the other way despite the lack of results

Has to keep the climb gradual and sustainable.

Despite not being at fault for any of the Swans failed flag runs, the heat has been turned up on Longmire a notch. This is purely due to the investment of Lance Franklin and Kurt Tippett – you can’t undertake such an aggressive list management move without the on-field results.

Considering the list collateral of the move (the loss of Shane Mumford etc.), Longmire has to get a lesser lights to stand up and diminish the illusion of Sydney’s free agency raids hurting them in the long term.

Went from being openly pot-shotted in the WA press midway through 2014 to the most popular man in the state. Earned a heap of bonus points due to the degree of difficulty in reaching the Grand Final – overcame low expectations, injuries, refined an entire tactical trend.

While he’s got plenty of time and space to implement his ideas, we’ll see how he handles to transition to being the hunted. Government is always harder than opposition.

Considering the stark and completely unforeseen improvement in 2015, the Dogs have to try and not be victims of their own success. Beveridge still has a lot of inexperienced players at his disposal and despite the disturbingly high ceiling of potential, he has to keep a lid on things.

Needs to be the opposite of Kevin Rudd – keep the cult of personality around the Dogs to a minimum and most of the growing pains will be excused.