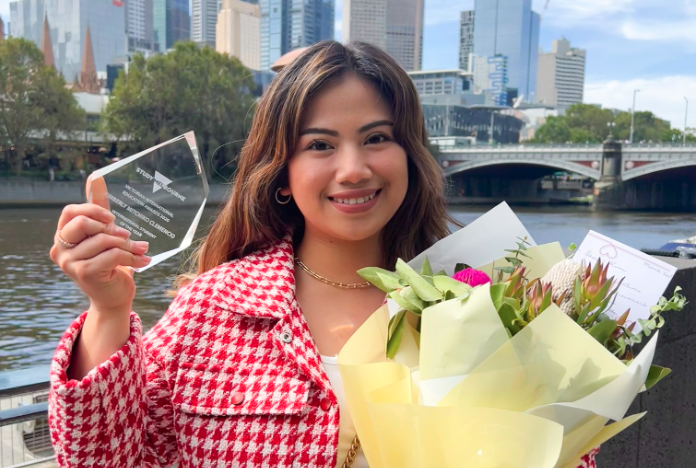 In her free time, Kimberly Clemencio would walk around the city. From home to Southbank, to Bourke Street and back home again. The scenery on the side of the road passes from high-rise buildings to age-old houses and back again reflecting the diverse culture of Melbourne. At times, the city smells just like the cup of coffee in her hand.

Clemencio’s confidence can be heard in her voice, can be seen in her eyes and body language. She is the type of person who always orders their usual cup of coffee but wouldn’t be afraid to try a new one. Clemencio is a born leader who is thirsty for making a change in the community. A young student from the Philippines, she was a Study Melbourne ambassador before the pandemic, then a year later she became a City of Melbourne ambassador.

“Might be small, might be big, I want to make something that would be a legacy in the future,” she tells upstart.

She also serves the Filipino-Australian Council of Victoria (FASTCO) as president. FASTCO is a network founded in 2012 dedicated to the Filipino community in Victoria, it aims to foster ties among students and their shared sense of community. The network has held multiple events aimed at promoting Filipino values and traditions. The events range from fashion runways, to talk shows, to karaoke nights, to create a playground for students to connect and make friends.

Clemencio’s job as president is far more than telling people what to do, it’s about being the person who initiates things and encouraging others to pick up their performance.

“I had to look after the overall work that my team does,” she says.

“You have to make sure they are learning from their tasks and responsibilities that you are giving them, but that they are also growing as a person and enjoying what they do.”

The pandemic is not easy for international students. It exposed them to countless vulnerabilities, mentally, physically and financially. Clemencio was an ambassador for Study Melbourne at the peak of the pandemic.

“It was really challenging,” she says.

“As a student leader, you have to be the role model, to stand up, to be the voice of the community.”

She admits that she wasn’t at her best during that period. The pressure of being the “role model” had laid great stress on already-existing vulnerabilities.

“I lost my job at the time because of the lockdown,” she says.

Clemencio is a strategic thinker. Questions and decisions are the backbones of her initiatives. She has asked questions and broken down negativities as a way to keep her life on track during the pandemic.

“I had to ponder on it for a week or two, then I decided ‘What is something that I have to do to make my life more productive right now and to serve the community, to serve my role as an ambassador?’,” she says.

“I had all the time in the world to think about ideas and motivation’s.”

Apart from the great impacts it has had on people’s lives, the pandemic has proven to be a break that has allowed a rethink in working culture. It has forced people to re-evaluate their relationship with work and reassess their life.

“People become more appreciative of the time and the presence of their family and friends,” she says.

The pandemic is a “blessing and disguise” to Clemencio. It taught her valuable lessons about living a fulfilling life.

“It would be having the vision, having the time to connect with your family and friends no matter how busy you were because you just don’t know if they were still there the next day or so,” she says.

Like many, Clemencio used to be one of those who wasn’t sure what she really wanted. Newscaster or journalist? Considering her background and experience, it was all possible.

The career chose Clemencio rather than she chose it.

Working closely with the community has given Clemencio a chance to connect with people from different backgrounds and cultures such as Vietnamese, Filipino and Malaysian. As a people person, Clemencio genuinely loves to be out there socialising.

“Knowing all these things, it becomes the motivation to do better, it gives me ideas and passion.”

Away from home, the community is all an international student has got since most of them don’t have family in their host country. It’s like spending Christmas alone in your room doing assignments or working in a restaurant during Lunar New Year because you don’t have anyone to celebrate with. That’s why having a connection with the community is so important.

“The international student’s community is really big, the students are there for each other,” she says.

“Their friends are their family.”