The talented Melbourne Rebels Super W player has pushed through not one, but two, potentially career-ending injuries. 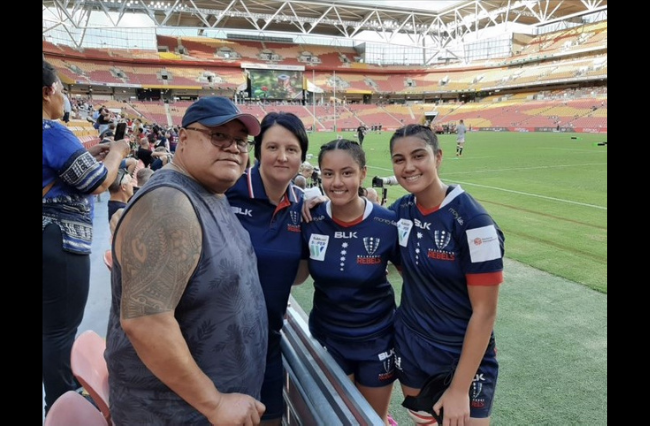 It’s a sound no athlete wants to hear. When teenage Melbourne Rebels Super W player Kristina Sa’aga heard a ‘pop’ come from her knee during a game for her local rugby club, she knew all too well the long recovery process that lay ahead.

At just 19 years old, a second torn ACL in the same knee within the space of three years was a setback that was sure to test not only the physical but mental strength of the talented centre.

Cousin of former Melbourne Rebels player Fereti Sa’aga and sister of Rebels Super W flanker May Sa’aga, the St Monica College graduate has experienced a stuttered start to her promising career. After overcoming her first ACL rupture in 2018, she made two appearances for the Melbourne Rebels during their Super W campaign last season coming off the bench.

However, the COVID-19 pandemic and injury has affected her chances to add to that tally. Like many athletes during last year’s lockdown, Sa’aga continued to train at home in a bid to be in the best possible shape for this year’s season, only for it all to come undone with the season just over a month away.

“The first time it was change of direction but this time I think I just landed awkwardly…I knew the feeling from the first time so as soon as I did it, I knew I’d done my ACL again,” she says.

Family means everything for Sa’aga and it’s those close family bonds that she’s relied on to help support her through every obstacle that’s been thrown her way.

“The thought of another injury does scare me but I’ve been talking to my cousins a lot as they’ve been through a lot of injuries, two of them have done ACL’s …so seeing them and how they bounce back is pretty inspiring for me as now I have that mindset that if they can do it, then I can do it too,” she says.

Beside her every step of the way has been her sister May, with the two sisters fortunate enough to play alongside each other for their local club the Northern Panthers before then running out for the Melbourne Rebels together for her debut against the Queensland Reds at Suncorp Stadium.

While the dream debut certainly didn’t go to plan, suffering a 104-3 thrashing to a red-hot Reds outfit, it meant very little for her immensely proud family, with mum and dad flying up from Melbourne to watch from the sidelines.

“Mum and Dad are really big supporters for us, they flew up and watched us play at Suncorp and wherever they can they’ll travel with us.”

While her ambitions on the field have been put on hold, Sa’aga is never one to sit back and feel sorry for herself, instead using the forced break as a chance to focus on finishing her second semester of a Bachelor of Criminology at La Trobe University.

Juggling study commitments, Super W and local club training, plus casual work at Red Rooster, like many up-and-coming athletes, Sa’aga knows full well the pressures that comes with being a semi-professional athlete.

“I really enjoy criminology but when I started the Super W, our training was pretty full on and I found it hard to adjust because I wasn’t used to juggling my studies, training and all my other commitments,” she says.

With this year’s competition in the format of a 10-day hub in Coffs Harbour, Sa’aga highlighted the challenge facing women’s rugby, especially in Victoria, with her sister May having to sit out the upcoming season to focus on her own Biomedicine degree.

“She works casual as well so trying to take that time off from work and with the competition being during exams, it was pretty tough for her.”

Sa’aga says that women may be put off by the lack of financial opportunity in the sport.

“In Super W rugby no one gets paid to play and I think that’s what puts women off.”

“There are so many women in Victoria that are so talented and can totally be playing in these teams but the thing that puts them back is work commitments. They have families they need to support and they’re not getting paid for the time they expect us to commit to trainings.”

“That’s why a lot of the girls are very passionate about playing because hopefully we can help the women’s game progress and grow and then it will be easier to draw girls into playing rugby.”

Article: Simon Rathbone is a second-year Bachelor of Media and Communication (Sports Journalism) student at La Trobe University. You can follow them on Twitter @SimonRathbone5