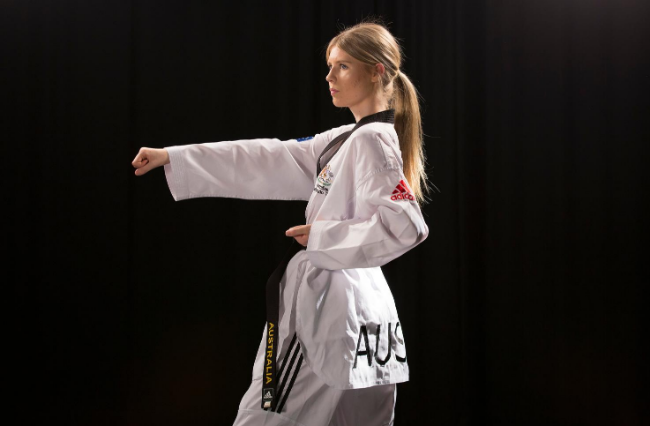 While Taekwondo may not be the most recognisable sport among Australians, it certainly left an impression on Kyah English when she stumbled into a local club in Preston.

English had always possessed a burning desire for competition, trying her hand in every sport imaginable. From swimming to netball, dance to tennis, you name it, English has tried it.

“I was that crazy kid that just did every sport and then I stuck to Taekwondo. I just loved it, I actually loved going to training,” English told upstart.

A move to the Melbourne Taekwondo Centre in Malvern saw English’s career blossom. In 2015, the club invited her to the Spanish Open which was her first overseas event.

While not achieving a podium position at the Spanish Open, she performed “fairly well” and gained recognition from her coaches, kickstarting her international career.

“From then on the coaches at the new club saw something in me and they financially supported me to get me on these trips because it’s all self-funded and my parents couldn’t really afford it, so they would help me out.”

It was not only English’s coaches who saw something special in her, with her family making sacrifices along the journey to help her achieve her goals.

“My mum drove me an hour to training and back, four to five times a week,” English said.

“My parents were willing to put the money in and my mum hasn’t been overseas for 20 years. They’re willing to make that sacrifice because they saw potential in me.”

In 2016, English won the World Championships’ selection tournament, competing in the senior age division as a 17-year-old. She referred to herself as an “underdog” and remembers feeling doubtful of her chances prior to the event.

English then travelled to the 2017 World Championships in South Korea, an experience she acknowledges as “definitely” the greatest achievement in her career to date.

English would miss selection for the 2019 World Championships in Manchester, with three-time Olympian Carmen Marton taking her position at the tournament.

Marton was English’s role model growing up, being the first Australian to win a Taekwondo world championship. But the battle for positions within the Australian team resulted in tension between the two, as Marton moved into English’s weight division.

English’s main focus now is on what opportunities will arise next.

“I want to make the next world championships and the next Olympics in Paris which I know I have a really good chance to compete in. I say to the people around me ‘I wish I wasn’t as good as I am’, it would make the decision a lot easier for me. I know I have a lot of potential, so I don’t want to give that up until I know exactly what I want.”

In the meantime, while training has been put on hold due to COVID-19, English has returned to her other passion – nutrition. Through years of competing, English became fascinated by the process of cutting weight for competitions, leading her to study dietetics at La Trobe University.

“Experiencing cutting weight and stages of binging after cutting weight, I’ve become really passionate about exploring the best way to cut weight before a weigh-in. You look at MMA fighters, I’m fascinated by the videos of them cutting weight, everyone has their own way,” English said.

“Some people drop fibre, some people drop calories, every athlete has a different way of doing it. I’m interested in exploring that idea that there’s no one way that is the best, it is more just an individual choice.”

English hopes that after her Taekwondo career she can transition into the dietetics industry, light-heartedly suggesting that COVID-19 has helped her in her studies.

“Dietetics is very competitive, that’s why I’m trying to do well at uni, which this year I am. Ever since isolation happened, I can’t train so I’ve become an A-plus student, which hasn’t really ever happened to me before, so I’m kind of liking it.”

Story: Marcus Bazzano is a second-year Media and Communications student (Sport Journalism) at La Trobe University. You can follow him on Twitter @BazzanoMarcus

Declan Sands is a second year Bachelor of Media and Communications (Sports Journalism) student. You can follow him on twitter @declan_25