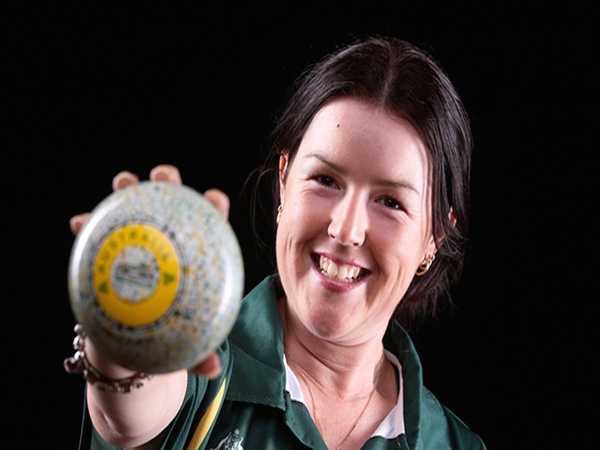 Lawn bowls is no longer dubbed the “gentleman’s game”.

The sport is traditionally known for its pensioners, reflective white uniforms and end-of-year barefoot bowls gatherings.

However, Australian bowls captain, Lynsey Clarke, is a refreshing contrast.

She’s a vibrant, world-class bowler, and she loves coloured uniforms. She also jokes about not being a huge fan of barefoot bowls.

“I steer away from barefoot bowls because it’s too frustrating,” she tells upstart.

Clarke has been associated with lawn bowls for almost all of her life. She first grabbed Australia’s attention after winning gold at the 2006 Commonwealth Games.

She’s 31-years-old and one of the oldest members of the Australian international bowls team, with almost 280 international appearances under her belt.

It all began at Club Helensvale on the Gold Coast, where Clarke still works and is based.

Clarke began bowling with her parents at age 11 and soon started playing in various tournaments on the Gold Coast.

“I scored a few trips around the country and got a bit of prize money. For a young kid that was pretty cool,” she says.

The thrill of playing for her country and making a career out of bowls is worth more to her than any prize money.

“I’ve been fortunate enough that I’ve made a career out of it. The money isn’t great,” she says.

“When I was winning a few things, getting to travel a fair bit, meeting new people, it was more that side of things that kept me going — the competitiveness of it more so than making a living.”

In 2011, the national coach contacted Clarke to see if she wanted to be Australia’s first bowls captain.

The path to captaincy was a natural progression, after many years of devotion and dedication to the sport.

She has been described as one of the nicest people on and off the green and easily approachable.

However, she says there’s more to the role than on green encouragement.

“It’s not so much an on green role. It’s not like a football captain or a cricket captain where you’re directing people on the field of play,” Clarke says.

“It’s more a support role. You’re a spokesperson for the players and someone the young kids can look up to and come and talk to.”

As the Helensvale bowls coordinator, Clarke looks after bowls events and enquiries.

“Here at Club Helensvale, they’ve been really supportive for the 20 years that I’ve been playing, and they’ve given me a job. I’ve been able to balance a semi-professional sporting career with a working career,” she says.

Lawn bowls is more high performance than people might assume. Players can be on the green for six to nine hours.

Clarke does three physical and three strength training sessions a week, as well as two extra days on the green.

“Bowls is a really tough mental game. We do a lot of work focusing on psychology.”

She says that playing with her idol, Karen Murphy, at the 2006 Melbourne Commonwealth Games, was one of her most memorable moments.

“We got a lot of media coverage. We got to mingle with these superstars and celebrate with everyone.”

The Gold Coast, where Clarke lives, will play host to several upcoming national and international events, including the 2018 Commonwealth Games and the Bowls Australian Open.

“The greens and the facilities on the Gold Coast are second to none in the country. It’s really exciting times for the Gold Coast,” she says.

The international selection process takes 12 to 18 months. Clarke says that being captain doesn’t guarantee her a place.

“Over those two years there are a lot of international events, a lot of training, a lot of selection camps. Once you’re in the team the whole focus is on training and getting ready for the event.”

Clarke is currently seven months pregnant. This didn’t stop her from coming within one shot of winning the Australian Indoor Bowls Championships last Thursday.

She narrowly lost the final to Victorian, Carla Odgers, in a nail-biting tie-break.

Aus Indoor Singles Silver medal for me. Not too shabby, now to put the feet up in prep for our biggest adventure yet! pic.twitter.com/EczGg7LbRS

Clarke says that lawn bowls has dramatically changed over time, with the introduction of coloured uniforms, more women and a younger demographic. The Australian Premier League is televised on Fox in November every year, which attracts a new audience.

However, one thing has remained the same — the difference between amateurs and pros.

Each week the upstart sports section and multimedia team will profile professional athletes from sports not typically covered in the media, in our new section, The Other Sports. Throughout this segment we are hoping to convey the life, struggles and dedication of modern day professional athletes. We also aim to give readers an introduction to these sports.