According to a new book, the AFL may have lessons in inclusiveness and diversity. 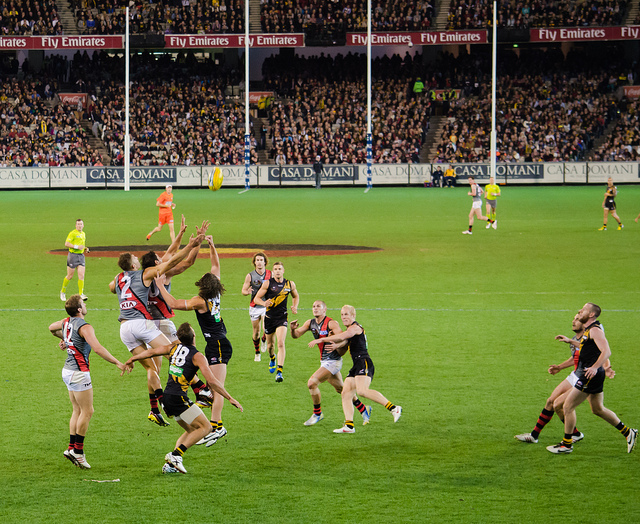 Last Friday night, 76,000 fans watched two of the most prominent Muslim athletes in Australian Rules Football embrace each other under floodlights in the centre of the MCG.

The pre-game show of solidarity, by Bachar Houli of Richmond and Adam Saad of Essendon, was a club-level response to Senator Fraser Anning’s August 14 speech in Federal Parliament a few days earlier.

The Senator’s maiden speech was openly divisive, particularly in its hostility to immigration from Muslim nations and its clear wistfulness for the days of the White Australia Policy.

In his new book ‘The Football Solution’, journalist and author George Megalogenis argues that divisiveness-as-strategy is on the rise in both domestic and international politics, while footy clubs are recognising the need to be more inclusive.

The political veteran includes Adam Goodes’ on-field treatment in 2014 and 2015 in his book. What he said about that treatment, on Friday morning, presaged the scene at the MCG on Friday night.

“The thing that I thought everyone was missing at the time was that leaders set the tone for public debate. Footy clubs can mediate some of these discussions better, but they can’t lead. I don’t think they lead, I think they react,” Megalogenis told upstart.

Senator Anning’s Tuesday speech was condemned by the leaders of all parties in an immediate show of political unity – that didn’t last past Wednesday.

‘The Football Solution’ offers the revival of Richmond Football Club as an allegory for politics, particularly for leadership, governance, diversity and inclusion.

“Football is the least offensive way to tell all Australians a story that connects them all,” Megalogenis said.

Tom Wills grew up with Aboriginal children in the 1830’s and 40’s, playing their games and speaking their language, in what is now country Victoria. In 1859 he played a major role in codifying the rules of AFL.

“Essentially through the Wills story, there is the connection to Indigenous Australia, but Wills himself, as a grandson of a convict, connects the game to the local born Australian – the settlers and convicts.

“But the people that took up the game in the first instance, the majority of them were migrants and that’s still the most inclusive story for Indigenous Australians, the children of convicts and settlers, and migrants that we have.”

Megalogenis stresses the limitations on the growing inclusiveness of footy, in the absence of political direction.

“It’s political leadership first…the story won’t have national carriage, even though we are talking about a national game, until a national leader makes the point,” he said.

Further, when Megalogenis says “There is nothing more Australian than footy,” he’s not referring to meat pies, beer and general blokeyness.

We are living in increasingly partisan times, but there’s also a particular undercurrent at work. Megalogenis argues there is something recognisably Australian in this lack of a shared foundation story.

“The issue with Australia is we’re always in the process of forgetting,” he said.

He details the succession of migrant groups – including Irish orphan girls in the early settlement, the Chinese, the Greeks, the Italians, and the Vietnamese – that are initially isolated and distrusted, only to find acceptance when the next ‘suspicious’ group arrives, currently the Sudanese and Muslims.

A chief aspect of this national ‘forgetting’ is the denial of the Frontier Wars between Europeans and Aboriginal people. The Wars ran from 1788 to the 1920s.

Denial is seen in the furore over the word ‘invasion’ in teaching guides, in the lack of recognition in our nation’s founding document, and in the refusal of The Australian War Memorial to commemorate the Wars.

As a nation we exclude the Indigenous experience from the greater narrative, and Megalogenis sees this filter down to the personal level.

“You get a lot of argument from people who haven’t considered the Frontier Wars and they very quickly take it personally. They think you’re accusing them of having been party to it,” he said.

“They’re kind of a de facto party to it through forgetting, aren’t they? I think the subconscious tends to rise up against the implication that you don’t know your own history.”

In parallel to this, in its official 2008 memorial book ‘This Australian Game of Football’, the AFL referred to the Indigenous beginnings of the game as a contested theory.

Despite this, footy clubs like the Western Bulldogs and Essendon are learning, imperfectly and over a period of years, how to represent all Australians.

Richmond Football Club in particular has consciously become more diverse and inclusive – in its membership, governance and players.

Its reward is a membership of over 100,000, a mosaic of players on ground that includes Indigenous, Maori, Muslim, White, Italian and Jehovah’s Witness Australians, and the 2017 Premiership.

As a template for political leadership, Richmond’s hard-won lessons hold out possibilities for change in the national conversation.

The AFL Media Dept did not respond to requests for comment by the time of publication.

Samantha Deasy is a Masters of Communication (Journalism) student at La Trobe University. You can follow her on Twitter: @samdeasy