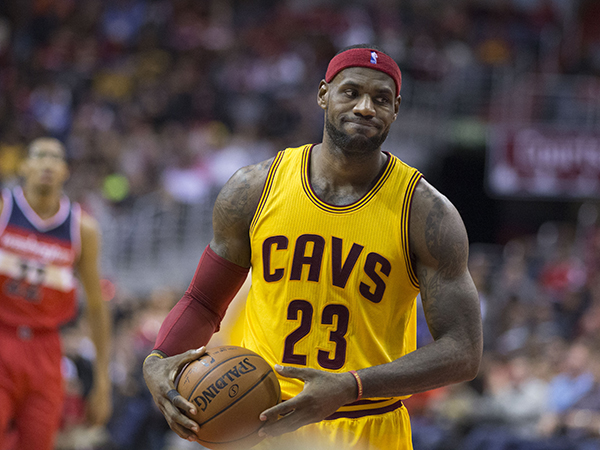 Eerie defence chants engulfed Oracle Arena as the shot clock wound down. James faked a drive to the basket before letting it fly over Iguodala’s outstretched hand. It was the shot that James wanted, but unfortunately for Cleveland it was also the shot Golden State wanted.

James’s jumper would clank off the rim, as would Shumpert’s desperation circus shot. Golden State hit back with a 10-2 run in overtime to crush Cleveland and take a commanding lead in this year’s NBA Finals.

While Game 1 had the hallmarks of a thrilling contest, there are numerous underlying issues for the Cavaliers going forward.

The question on everyone’s minds coming into the finals was how will Golden State defend against James? How do you stop a rampaging freight train, who averaged 30.1 points, 11 rebounds and 9.3 assists in the conference finals.

Golden State employed the “don’t let anyone else beat us” tactic and somehow it worked. James may have had 44 points, but Golden State effectively shackled the rest of the Cleveland line-up.

The majority of James’s possessions resulted in a one on one isolation plays or post ups. Golden State rotated their defenders to keep James guessing and denied him from finding his rhythm.

They dared James to shoot from mid range and the perimeter, and shoot he did. James let 38 shots fly, which was 68% of Cleveland’s total shots for the game. James made 18 of his attempts, which considering the defence is acceptable. However the effect on his team mates output was catastrophic.

The entire Cleveland outfit, minus James, managed just 21 baskets. Only three more than James made on his own. J.R. Smith and Shumpert combined for 5-19 shooting while Jones and Dellavedova failed to find the bottom of the net in their combined twenty-six minutes of game time.

Irving battled manfully and arguably outplayed Curry before succumbing to injury. While Irving was hopeful for a return to the series, scans have confirmed that he has fractured his left knee cap.

The alarm bells are ringing in Cleveland as the Aussie, Dellavedova prepares to play considerable minutes in Irving’s absence. “Delly’s” spirit and drive cannot be questioned, however in Game 1 he looked lost against Curry and this poses as a dangerous match-up for the Cavs.

When the Cavaliers offence is flowing, James is as much a facilitator as a scorer. There are not many six foot six small forwards in the league who can pin point team mates like James can. His vision may be his most undervalued asset and has been a lethal weapon throughout the post season.

However with Golden State refusing to double team James until the last second, they are effectively taking away his ability to set team mates up. In his 46 minutes on the floor, James only managed six assists for the game. When James eventually did find a team mate, Golden State’s elite close out speed made every shot a contested one and the impact was profound.

Through the first three rounds, 32% of J.R. Smith’s, Shumpert’s and Irving’s combined 3-point attempts were contested. In Game 1 against Golden State, that figure sky rocketed to 45%.

As a result of this pressure, the trio shot a combined 1-10 from beyond the arc on contested shots. Without a hand in their face, they shot 6-12 from deep. In a game that went down to the wire, the extra effort to close out on Cleveland’s shooters was pivotal to Golden State’s success.

Cleveland can’t rely on James to single-handedly defeat the Warriors, however the Cavs offence is not the only problem. The Warriors post season slogan “Strength in Numbers” is more than just a catchphrase, it’s the backbone of the Golden State team.

Not many teams in NBA history can claim to go ten players deep, but Golden State’s bench is defying history every night. In Game 1 the Warriors bench outscored Cleveland’s bench 34-9 and more importantly out-rebounded them 19-6.

The Cavaliers one clear advantage is this series is on the glass. Tristian Thompson has been a revelation this post season and Mozgov is no slouch either. Add James’s imposing figure to the picture and Bogut is under extreme pressure to secure rebounds.

When the starting units are in the Cavs regularly get multiple looks at every possession and the Warriors look vulnerable. When the bench units are in, its an entirely different story.

Throughout history basketball experts have proclaimed that “jump shooting teams can’t win championships”. In the heat of the play-offs the fast pace, long range offense will inevitably crack under the pressure. Unfortunately for the experts, the Golden State Warriors are raining threes on their parade.

The series is by no means over, any team that features LeBron James cannot be written off. However with Irving gone for the series, the odds are stacked in the Warriors favour. If the Cavs are to find life they need James to facilitate for his team mates and throw a different look at the Warriors.

Daniel Freeman is a first year Media and Communications (Sports Journalism) student. You can follow him on Twitter: @dlfree3.