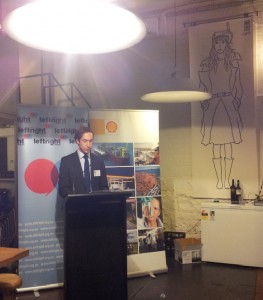 The policy, which outlines ways for Australia to utilise innovation to ‘foster economic growth and provide practical solutions to pressing problems such as declining productivity growth,’ is complex and meticulously researched. It is made all the more impressive then, by the fact that it was written by a team ranging between the ages of 16 and 24.

Left Right is Australia’s first independent, non-partisan think-tank, comprised entirely of young people. Founded in 2008, the organisation seeks to provide a platform for engagement in the political process to those that have the most invested in its future: our youth.

This vision of youth empowerment is realised through Left Right’s Policy Fellowship, which runs each year in Perth, Melbourne, Sydney and Brisbane. The fellows engage in rigorous research, participate in workshops and meet with government representatives, advisors and key stake holders.

The resulting policy is something the organisation takes extremely seriously.

‘We don’t see it as tokenistic,’ says Left Right CEO Will Emmett, 24. ‘We see it as an important idea that needs to be communicated and advocated. When you stand for something and speak with passion, and research thoroughly, you realise people will listen.’

Left Right’s innovation policy recommends that the Australian research market could be strengthened by restructuring the Australian Research Council’s Linkage Grant Scheme. They suggest the adoption of a voucher style research funding scheme, and a ‘Complete Package Funding’ system to encourage the establishment of Specialisation Hubs within universities.

Mr. Emmett, told The ABC’s Conversation Hour last week, ‘Innovation is very important for Australia’s future and very important for our long term economic growth, [we’re] pushing the idea of a demand driven university funding platform where business and industry can drive university research by having the opportunity to purchase vouchers.’

This, the think-tank argues, would facilitate relationships and collaboration between the research institutions and businesses, allowing business to access university knowledge and skills, while making the Linkage Grant Scheme more competitive and demand-driven.

20 year old Communications Director Bianca Kerr joined Left Right’s Victorian team in October last year. A third year media and communications student at The University of Melbourne, she found herself drawn to the organisation for its culture of pragmatism and long-term thinking, which is in many ways the antithesis of the naive youthful idealism often associated with university politics.

‘I was interested in politics, but never felt that the kind of societies and groups that are offered at universities were for me. I find university groups are focussed on immediate action; they can be a bit activist, as well as too caught up in a culture of beer and barbecues.

Left Right really appealed to me because they had this very professional demeanour that seemed to be focussed on utilising your energy as young person, while portraying yourself as a professional. I wanted to think critically and use skills to implement strategies, while working within a professional team.’

Miss Kerr rejects the popular notion that young people are disenfranchised by, and disconnected from the current Australian political landscape.

‘I’ve met so many inspiring young people at Left Right; they’ve worked so hard to get where they are, and have such energy and enthusiasm.

‘Some people say that the youth don’t want to be a part of politics, but I want to have a voice, I want [the politicians] to hear us, to know that we are hearing them, and to know if we don’t like what we’re hearing we are going to tell them.’

By utilising the energy, passion and smarts of Australia’s youth, Left Right seeks to bring new perspective and ideas to public policy. Its 2011 policy foreword discerningly notes, ‘sometimes new directions are not apparent until pointed to from someone “outside” a system.’

Yet it is also true that the ‘outsiders’ of our society are often greeted with a certain level of mistrust and suspicion, and Left Right’s youthful member base has found themselves to be no exception.

‘I believe our youth is a strength,’ says Miss Kerr. ‘But a lot of people perceive it as a weakness. We get a lot of criticism, often from young people themselves. They say, ‘What right do you have to make decisions or provide recommendations to the government when you are not experienced and qualified professionals?’

‘But, when we go to Canberra we’re well respected. We have a canon of work, of research and consultation with important stake holders. We have young people that can sit in a meeting and really hold their own, presenting policy to politicians in ways that actually makes them listen. We have had an impact and we are contributing.’

Certainly, Left Right is not an activist organisation; you will not see its members protesting on Spring Street. But Miss Kerr argues that by engaging young people with public policy, the think tank may soon prove itself a force to be reckoned with.

She offers a warning to our politicians:

‘You won’t see us protesting on the street or interrupting your Sunday night dinner. Left Right will meet you where you’re supposed to be doing your job. We’re not going to send you a petition. You will meet with us face to face. You’re going to hear us because we will be speaking your language. See you at Parliament!’

Alyce Hogg is studying a Bachelor of Journalism with Honours. You can follow her on Twitter @alycehogg.