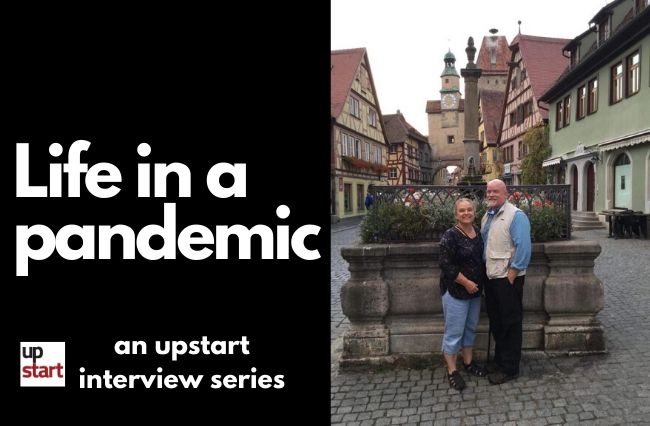 Bill Fuqua, 60, and Janice Fuqua, 61, are adjusting to life in isolation in Massachusetts, where they’re trying to keep themselves and their family safe.

Bill and Janice Fuqua, like everyone else, have had their livelihoods vastly impacted by the effects of COVID-19. They live in the community of Westfield, an hour and a half from the Massachusetts capital of Boston, in the United States. Bill is the operations director for the second largest wastewater treatment plant in the country’s northeast and Janice is a retired teacher. They told upstart about what it was like trying to move a big workplace online, having run-ins with police and watching the dreaded “nightly fright” that is the US evening news delivering the latest COVID-19 developments.

Bill: Well I’m home, every day is the same but mostly I still work … We have downsized our operating staff each day, so we were able to move everybody home and work from home with laptops and whatever devices. Ninety-three percent of our 250 employees are working from home and the rest are operating in our facilities or doing work out in the field on a day to day basis. That’s been a huge change for us. Some things we didn’t know we could do, but a lot of things aligned and fell into place at the right time for us to move everybody home. And [we’ve got] technology to help us with things like Microsoft Teams and Skype and all these tools now.

I was thinking about it today and this is the first time in over 30 years I’ve been able to have lunch at home which I’ve never had the chance to do.

How would you describe the situation in the United States in general at the moment?

Bill: We have our hour of ‘nightly fright’, we like to call it; the hour of local and national news which is the same awful news every day. It’s surreal. Out where we are there’s thousands of cases within the area but it’s nowhere near as bad as the urban, city areas that are getting the worst of it.

What’s happening at hospitals, in New York especially, there are refrigerator trucks parked outside to fill with bodies in the cities that they can’t process yet and bury. That’s a big thing now around the bigger cities on the East Coast here. That doesn’t seem to be a problem in California and the West Coast. There hasn’t really been a big spike in cases out there. It’s just wild, it’s not a war, it’s just something that’s happening that people have to figure out how to deal with.

Have you noticed any changes in local community attitudes?

Bill: In our community there’s no traffic, there’s no one really around. So, I think for the most part here everyone is pitching in and doing the right thing.

Janice: But I think it depends on which town you go to. Because we have big communities near us, and some communities are getting angry because people are out and about. They’re holding baby showers and birthday parties in local parks so they’re not in their houses … and the people are complaining a little. But it depends which community you’re looking at. We have such diverse communities here all within a ten- or 15-minute drive of each other. But the community where we live in, everybody is home.

What impact has this had on you and your family as a whole?

Bill: Janice’s brother got pulled over by police yesterday. He was a truck driver for a company that distributes golf carts to golf courses and he’s continuing to work, and the police pulled him over and told him, ‘you’re not an essential service’. They phoned back to the office, raided the company he worked for and told them they had to shut down because they weren’t an essential service.

Janice: We also had this busy spring planned to go see our kids and holiday, but now everything is cancelled.

What do you fear most about the situation?

Janice: It’s really hard for my father. He’s 89 [years old] and I’m on the phone with him every day just so he stays home. He just doesn’t understand. I told him all these things he has to buy like wipes and hand sanitiser, and he says he never uses them, so he won’t buy them. I feel like all the people my age are just after their parents because they just don’t get it.

My brother is living with my Dad and he’s going out and working every day and coming back. My Dad keeps going, he’s active, but three years ago he had open heart surgery. So, he does have underlying things. And two guys living together, they’re not the cleanest let’s face it.

Bill: They just don’t get it. We’re afraid that they’re vulnerable to picking this thing up. There isn’t a real group of people now who are most vulnerable. You don’t necessarily have to show symptoms and [there are] people [who] go into pulmonary failure and have to get on a ventilator for two weeks. Our fear is just not wanting to get it and we’re just trying to avoid it.