Jacob Turner, a former airport worker, shares what it was like working at the airport when during the coronavirus outbreak. 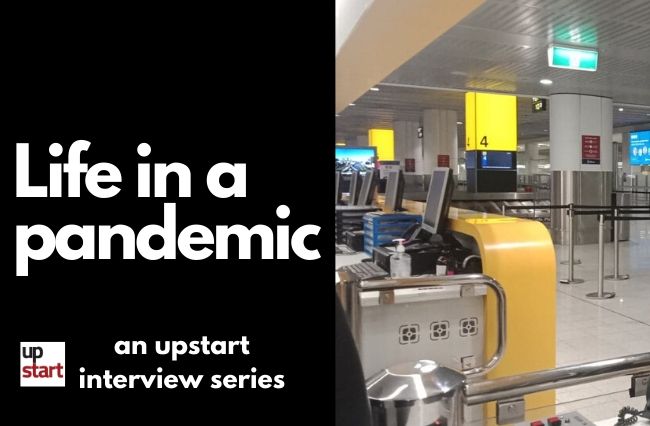 Jacob Turner, 23, a former airport worker who lost his job due to COVID-19 pandemic.

When the coronavirus outbreak reached Australia, the travel industry was hit the hardest. Airlines started cancelling flights rapidly as the government applied necessary travel restrictions to stop spread the virus. Within a matter of days, thousands of airport staff were stood down, as there was not enough work to fulfil contractual hours.

One of those workers was Jacob Turner. After working at Perth Airport for two years, he transferred to Melbourne Airport at the end of last year. Turner worked as a check-in agent for a major ground handling company, being responsible for several major Australian and international airlines.

His plans to build a new life in Victoria changed as soon as the outbreak happened. Turner had to think on his feet. Within two days, he made a decision to go back to Perth, packed his car and left Melbourne before the borders were closed.

How would you describe the environment at the airport before you left?

It was rather tense, not just within my company but within the airport as a whole. We obviously knew that COVID-19 was affecting travel and definitely saw a decline in numbers. So, I think we were all looking ahead at our future with uncertainty. As every day, in the last couple weeks, of being at the airport went by, new information bombarded the workplace, and it honestly became overwhelming. I think we all pretty much tried to push what was happening to the back of our minds, distracting ourselves with jokes and plans for the future, but deep down anticipation of what may lie ahead really left us feeling helpless.

What was  your personal plan when you realised that airlines started cancelling flights?

At first, I honestly didn’t really have a plan, because, along with others, I was pretty overwhelmed with how quickly airlines were dropping flights. It was only when our most major carrier announced on the news its cessation of international flying, it kind of hit me that I needed to maybe make some plans. I knew, that if we were fortunate to still work, hours would be reduced drastically enough, and I wouldn’t be able to support myself financially by paying rent or having enough for living expenses. Since moving to Melbourne from Perth, I had no family to fall back on. After speaking to my family and my landlord, who was extremely understanding, I decided to pack my car up and drive across three states back to Perth. A gut decision that definitely proved to be the right one, since the mass stand-down of the majority of employees within my company, and the closure of state borders [occurred] the day after I arrived back in Perth.

How did it feel when you realised you no longer had a job?

When I realised I had to be stood down from my job it was very disheartening. As I said, I loved my job for the most part. I was good at it and also had goals within the company I still wanted to achieve. I am trying to maybe see it as a positive thing and hope to move onto something better. But it is sad knowing that this chapter of my life may be over. It definitely feels like a major set back.

How are you financially supporting yourself?

My family are helping support me at the moment which is great, and I am forever thankful. I am receiving my paid annual leave which helps me buy some groceries for the house and still pay for my own bills such as my phone and car, however, this will is not going to last much longer. I have qualified for JobSeekers which will also help, and I am hoping my company will be able to utilise the JobKeeper payments from the government.

What was your “normal” before the coronavirus outbreak?

My normal before the coronavirus was keeping so busy, that I would always be tired and looking forward to a day off. Typically, depending on my shift pattern, I would wake up at stupid o’clock, head to work and deal with crazy but funny passengers for hours. Then I would finish, go to the gym, maybe do some shopping, go home and relax. I’d go to uni and attend my lectures and classes, being able to socialise and collaborate with my potentially future work colleagues.

What is your normal now?

Now, my normal is waking up in the middle of the day, procrastinating until I have to attend my law classes on Zoom. Once done, I’ll probably raid the fridge out of complete boredom, sit with my computer on my bed with my textbook open and still procrastinate my study, because I actually now have plenty of time. I often message my friends and sometimes call them on FaceTime, especially the one’s interstate. We all compare our levels of boredom and then speculate when we’ll be able to socialise again in public.

Yulia Fokina is a third year Bachelor of Media and Communications (Journalism) student at La Trobe. You can follow her on Twitter @Yulia__Fokina.