The 14-day isolation period for travellers meant that Pascoe and his wife were forced into lockdown upon arriving in Australia. 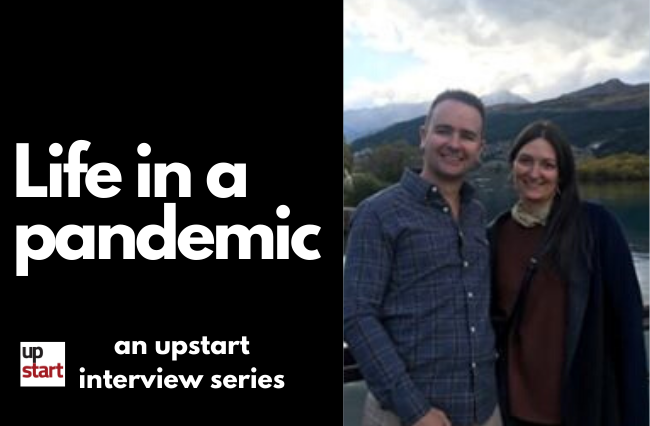 Pascoe and his wife Vanessa arrived in New Zealand for a holiday on Friday 13 March. Two days after their arrival, New Zealand Prime Minister, Jacinda Ardern, announced that a 14-day isolation period for travellers would commence in two days. Then, back in Australia, Prime Minister Scott Morrison followed suit, announcing that there would also be a 14-day isolation period for travellers arriving in Australia commencing the midnight of Sunday 15. This meant that from the moment Pascoe and his wife arrived back home to Melbourne on Saturday 21 March, they were forced into self-isolation for two weeks.

At the time you were travelling overseas, the spread of COVID-19 seemed to be increasing quite rapidly worldwide. Did you ever think twice before getting on that plane for your holiday?

Nah, I didn’t. Even to the point where we were flying over, I knew that it was escalating and serious but not as serious as no one being able to fly anywhere or a complete lockdown. Knowing that I was flying to New Zealand, obviously, if I was flying somewhere else like Asia, Italy, Europe, or somewhere like that, where there were a number of cases and were pretty much in lockdown already, I would have reconsidered going. Knowing that I was going to New Zealand and literally, at that time when I flew out, there were only four or five cases of the coronavirus in New Zealand, I thought, ‘let’s go ahead as planned’, so that’s what we did. It crossed my mind definitely but at the same time, I was like, I think we’ll be fine.

At the time, were you aware that you would have had to come back home to Australia and stay in isolation for two weeks?

Correct, so the news for that came through on the Sunday [15 March]. I thought as long as I could get back into the country… I didn’t want to get stuck in New Zealand, so we were sort of watching for that closely as well. And then it was like if [Scott Morrison] announces a complete lockdown, surely he would give us some sort of a window to come back, hopefully. But I had my brother in Auckland, so if worst case scenario I did get stuck there, I could’ve just stayed with him.

When you got back to Australia, can you recall what authorities told you when you returned to the country?

The only difference was that they handed us a sheet of paper regarding the isolation. We had to read the document in relation to the isolation, and they also handed us a document on the flight in regards to coronavirus. On the isolation document, we had to fill out all of our details, where we lived, our contact details, where we planned to isolate, I guess in the sense that they will be actually following up to see if we were isolating. But other than that, it was very, very quiet and we just breezed through customs. There really wasn’t much difference to what there would be when you normally fly.

Did they do any of that temperature checking like they show on the news?

Nah, nothing. Nothing at all. To me it was actually too easy really, there probably should have been more screening happening.

And you know how they’ve been saying that the police have been going around to see if you’re actually isolating. Has that happened to you?

How has self-isolation since affected you personally?

It has definitely taken an emotional toll on me like everyone. There’s been a lot of mental stress, with not only my professional livelihood, and the impact to the business and its people, but the livelihood and health of family or close friends who are losing their jobs or having their businesses shut down during this difficult time.

There’s certainly been some emotional moments and it’s been very important for me to surround myself with those I love and care about. Essentially, I’ve really tried to support and care for loved ones who are doing it really tough through this period. I’ve also had great support myself from my wife and family throughout the whole process, which has helped me immensely, personally. It’s very hard to not think about the pandemic in place at the moment, and my main focus has been on being there for those I care about, and practicing the right behaviours as per the government mandate. There’s no doubt we’re all hoping this is over soon and all we can do is support each other through it.

How do you get your essential items such as groceries or medications?

We’ve had good friends and family members bring us items and offer a lot of support: “‘What do you need?’”, “‘What can we get for you?’”. So Vanessa’s parents have been great in dropping our groceries for us. My dad’s offered a number of times too. Vanessa actually tried to place an online order the other day because I think they were saying they’d make priority orders for self-isolation so we’ll do that as well, but we’ve just been relying on family and friends. Yeah it’s crazy and particularly coming back from overseas, we didn’t really have anything as it was. We sort of cleaned out the fridge before we left so it was sort of starting from scratch.

What would you guys do if you had to go into a full lockdown, that would probably drive you more insane considering you’ve already been in isolation for two weeks.

I’m desperate to get back to some sort of normality and see people again. I was with my brother for a weekend in Auckland but then from last Monday [16 March] onwards it was just Vanessa and I in Queenstown, and then coming home it’s just Vanessa and I so, getting back to some normality I’m desperate to do that. So in terms of total lockdown, I mean if that is what’s needed to get on top of this virus sooner, then I’m all for it. But obviously personal preference for me would be getting back to some normality as soon as possible.

Do you think the government made the right choice in placing those travel conditions such as self-isolation for 14 days?

Yeah, I do. I think it probably should have come earlier, to be honest. Looking at New Zealand closely, they probably handled it in the best way in my mind. I guess with having the benefit of seeing other countries and how they’ve dealt with it and how it’s escalated there. New Zealand really acted swiftly and I think had a more firmer stance, which is what was needed to really isolate and slow [the virus] down before it becomes a major disaster. It is already in a lot of other countries and it seems to be going that way [in Australia]. I mean not a disaster but it’s getting towards that absolute magnitude proportion now.

So, I think they definitely made the right call but I think maybe a little bit too prolonged. I mean I can understand their mindset in having the economy in their mind and people’s livelihoods and stuff like that. There’s obviously other factors as well, things that would have had to be considered along the way. I guess we could always lose lives that way with people under a lot of stress and strain – the suicide rates could increase, or domestic violence or things like that so I guess there’s a lot of things to consider. So, it would be easy for me to say ‘they should have acted sooner’ or ‘they should have done this’ but I think on the whole they have done the best that they could.

Article: Rebecca Borg is a second-year Bachelor of Media and Communications (Journalism) student at La Trobe University. You can follow her on Twitter @rebeccaaborg.