Danusia Francis, artistic gymnast representing Jamaica talks about the impact of COVID-19 on her Olympic preparation. 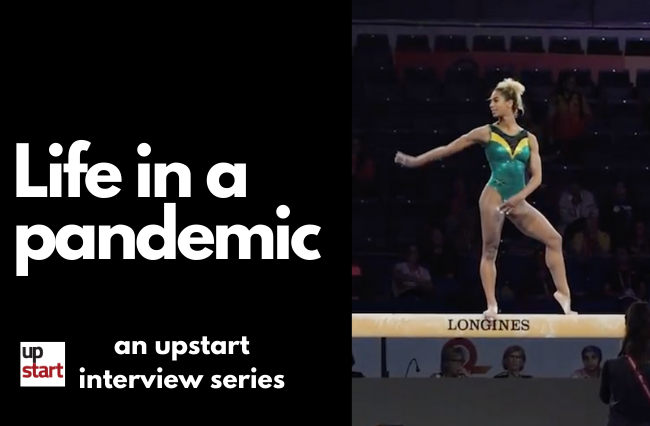 Danusia Francis, the 25-year-old gymnast taking her third shot at an Olympics spot.

Danusia Francis knows how hard it is to secure a spot in the Olympics – she has been trying since 2012 to represent her country in gymnastics, whether that be for England or Jamaica. She came close in 2012 but fell just short, and was named as the reserve for the Great Britain team.

Following the Olympics, Francis travelled to America to reignite her love for the sport and studied college gymnastics at UCLA. Then, realising she was eligible to compete for Jamaica (her father was born there), she tried out for the national olympic team in 2016, but once again missed a spot, this time to top local gymnast Toni-Ann Williams.

Finally, in 2019, Francis qualified for an individual spot at the Tokyo 2020 Olympic Games. Then the news hits: The Tokyo Olympics will be postponed.

Can you describe when you first found out that the Olympics was potentially going to be postponed, and how it felt when you finally heard it was official?

I was trying to not read into the rumours and trying to hope for the best. Even if you didn’t read into the specific Olympic rumours, it was quite obvious with the numbers of coronavirus cases that it had to happen. As much as it wasn’t a shock, it still is disappointing. An athlete that is older like me, this is probably the last competition. You just looked forward to the end of your career and starting a new chapter.

Since the news, I’ve been able to process it and I’m definitely a lot more optimistic and thinking I can use this time to get stronger and work on my weaker areas. I’m going to have a whole year to get some of the new skills that I didn’t think I would be ready with and then I’m going to have a new floor routine. I’ve been able to refocus and be grateful for the fact that I am qualified to do the Olympics and whether it’s 2020 or 2021 isn’t a huge deal. It’s more important that the coronavirus gets resolved and that hopefully the Olympics can act as a light at the end of the tunnel. This can be a massive celebration of not only bringing the world of athletics together but defeating this virus.

Have any athletes reached out to you for guidance, or have you sought guidance from other athletes to get you through this time?

The day it was announced that the Olympics was definitely going to be postponed, I went to the grocery store and I bumped into a friend of mine who was a boxer for Great Britain. That day I was feeling a bit overwhelmed and it was only a couple of hours after seeing all the news, and I got so many text messages from everyone.

I just felt kind of overwhelmed by people wanting to be heartfelt when I didn’t really know how I felt. I was saying to my fiancé ‘why is everyone asking me? I just want to turn off my phone’. [My boxing friend] was getting hundreds of messages and [he shared] the same story that he hasn’t processed it yet.

I’m friends with a lot of gymnasts, so my closest friend is probably Becky Downey who competes for Great Britain who is in the same situation. I’ve been speaking to her a lot and talking about what we’re doing at home or home training… And [there’s the] usual friend gossip as well!

What did your training consist of before and what does it involve now?

Usually all my training was at my gym. I was training about 16 hours a week and but now our coaches put on zoom sessions for us on the same day that we train which is really good and honestly, they’ve done such a good job at keeping all of us motivated. I’ll try and incorporate different activities and conditioning … It’s crazy, you’d never think that you’d be exercising over a zoom class.

What are the difficulties that have been surrounding zoom classes?

Everyone’s got different equipment or space in their houses.  I’m in a workout gym so there’s no gymnastics equipment, but my coaches allowed us to take a lot of equipment from the gym but still nothing competition size.  We don’t have a full-size beam or full-size floor, but we obviously have a few things that we knew we could fit into our space. It’s about just trying to stay in shape and try to keep your body prepared for when you can return to the gym.

I know to me, bars are quite mental so I’m hoping when I go back, I don’t have any extra hurdles mentally to have to face. The physical side you can work out and you can stay on top of it as much as you can at home but the mental side in gymnastics, besides the visualisation and watching videos actually doing the skills mentally, is something that can only be done in a full size gym.

Where are you in the world right now and, what has it been like at the moment living there?

I’m in Kent which is near London. The UK at the moment is in full lock down now so you can only leave your house for essential reasons like going to the grocery store or pharmacy, but they recommend staying in your house as much as possible. My fiancé has a health and fitness clinic so obviously it’s not currently open to the public, but we usually will just go there and then we’ll work out. So, your training schedules obviously are being a little bit affected by this over the last few months.

You were trying to also plan your wedding whilst preparing for the Olympics, how has that been affected?

Our wedding was planned for June 2021, so we still could get married, but I just don’t want to have them both that close together. We decided to postpone that for another year as well. It’s a bit disappointing but I wanted to really enjoy it. I didn’t want to get married then go back to training the next day. And that’s the same for the Olympics, I don’t want to train less because I am going to a cake tasting or something!

Article: Tricia Mifsud is a third year Media and Communication student (Sports Journalism) at La Trobe University. You can follow her on Twitter @triciamifsud