Stage three restrictions weren’t going to stop this couple from exchanging their vows. 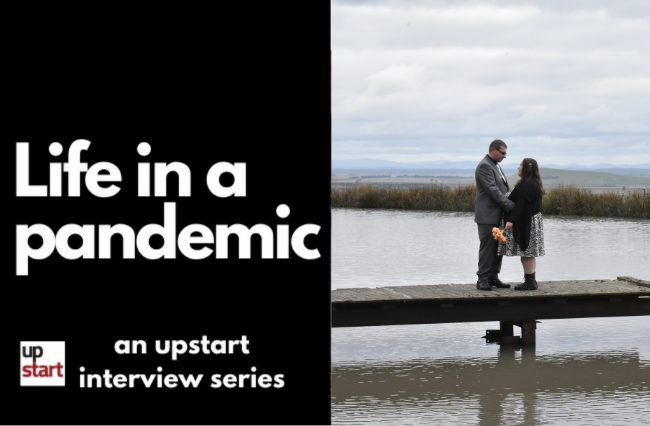 Laura and Brian Zammit, getting married during a pandemic

Engaged essential workers, Laura and Brian Zammit, believed that there was no better time to have their wedding than during the COVID-19 pandemic. Originally, the couple were planning on getting married in late 2021, however, they decided to bring their wedding forward to May 2020. Despite the restrictions put in place for large gatherings, they believed that now was the right time to say ‘I do’.

The couple discuss the difficulties faced throughout the process of organising their big day, hunting down a ring and limiting their number of guests.

At what point did you decide that now would be the right time to have your wedding?

Brian: We just bought a house together and we were actually talking about organising our wedding plans after we moved in, but a few other things came up and the coronavirus hit, so that made things a little uncertain in terms of finances and general health. After we heard about the new rules that came to weddings and funerals, I said to Laura as a joke [that we should get married]. But then as I thought about it, it seemed like a really good opportunity and time. Given that we’re also both essential workers, we’re probably more at risk at getting the virus ourselves because we’re still dealing with the general public. So the idea of not going through with our wedding because of social expectations or just waiting for the virus to blow over, it just didn’t seem worth not doing it. I think we chose this more so because it is what we wanted.

You mentioned that you were both essential workers where you could possibly be exposed to the pandemic at any time, did that influence your decision to bring the wedding forward?

Brian: Definitely, I’m a baker and as a baker it’s funny – I’m less likely to get it rather than someone else, but the problem with a bakery setting is once one person gets sick, it spreads throughout the entire shop and that has complications on its own end. My fear is coming home and giving it to Laura [who has asthma].

Laura: And I work with youth in mental health and even though we’ve reduced our face-to-face appointments, there’s still a risk of transmission between staff. So that’s in the back of my mind as well. At the moment, I’m unable to work from home, but if my company finds a way, the reality is if [the virus] is coming for me, it’s coming for me. I’ve got to stay and keep working for as long as I can and that’s just something that I have accepted.

How difficult has it been to set-up your wedding, given the time that we are in?

Brian: I’m surprised with how much we’ve actually gotten away with recently, but in saying that, it has been an incredibly stressful process. I think the biggest issue we had at the start was the inconsistency of what was going on. For example, with the rings, I went to a jeweller and you could tell that the shop clerk was actually afraid because when the details of the virus came out, we already knew that it could last three days on metal, but then it was revealed that it could last nine days on glass. If you’re dealing with a  jeweller that’s all they have, glass display cabinets. That following weekend, we decided to go back to see what [the jeweller] had, but the shops were all closed, so then we had to work around that. We even looked at pawn shops and thankfully from that experience, we did manage to get our ring sizes. So from there, we compromised and managed to get the rings online.

Laura: Finding clothes has also been difficult because you have to buy everything online and then it’s too much of a hassle to return if it doesn’t look good. We couldn’t even go to the venue and plan what we wanted to set up without the risk of copping a fine for non-essential travel.

Brian: On the flip side, I guess having less options helps in making decisions. Sometimes you just have to compromise and settle. It’ll prepare me for marriage so that’s good!

What was the reaction that you received from your families when you told them about your wedding arrangements?

Brian: Even before this whole thing happened, originally I hesitated to tell them about the marriage because they are very religious. So when I told my folks that I wasn’t going to get married in a church – which wouldn’t have been an option now anyway – I was relieved as they were really supportive. I told them my reasons and they said “follow your heart” and “do what’s right for you and her”. So with a European background, I consider myself very lucky. Certain European and traditional families wouldn’t have had a bar of it.

Laura: I, on the other hand, didn’t get much of a reaction from my father at first. Dad was trying to hint “do I have to buy a suit?”, which I explained that he didn’t. My grandmother had this very strong idea that my dad was going to walk me down the aisle. I told her, “there are only five people, there’s not really an aisle to walk down” and the role of the witness isn’t just walking me down the aisle and giving me away. There’s photography, videography and a lot more involved so that’s why we’ve carefully selected our witnesses, because how do you pick just one family member?

Is there a way that you will be sharing the wedding with your family? i.e. livestream, video record, etc?

Brian: We’re always looking at our options. In a traditional wedding, you could just hire a specialist to take care of these things but because we’re restricted with how many people we can have, we have to be a bit more creative. At least we have technology, whereas if this happened twenty years ago, you’d have to use a camera recorder, now you can just use a mobile phone. But I guess the limitations too is just not having people on hand to manage it. I spoke to my sister about this and she said “that footage is going to last you for the rest of your life so you better get it right”. It would just be ideal to get the footage properly and worry about uploading and streaming afterwards, but we’re definitely going to share it.

What advice would you give someone who is also planning a wedding during this time?

Brian: Well half the advice that I received was “don’t get married”. But in terms of actually organising a wedding in these circumstances, I’d say start with a celebrant and location and work your way from there because without those two things you won’t really have a wedding.

Mr and Mrs Zammit tied the knot on 22 May. That’s right, the wedding has passed so no gate crashers could crash it!

Article: Rebecca Borg is a second-year Bachelor of Media and Communications (Journalism) student at La Trobe University. You can follow her on Twitter @rebeccaaborg.