Living statue street performers face all kinds of challenges—from the art of a largely still performance to crowd hecklers. 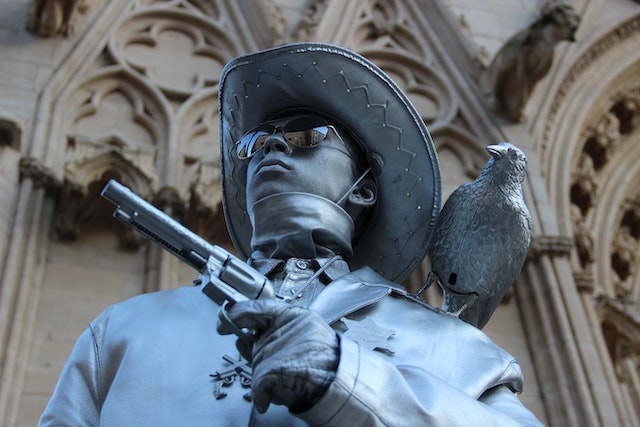 Living statue street performers are often silent curiosities, and—if they are good—indistinguishable from their metal and stone peers.

Dressed as figures from history, favourite franchises, or even paintings such as Mona Lisa, they frequently have to stand in all kids of weather, in layers of clothes and make-up, incredibly still for hours on end.

Through clouds and rain, professional living statue Alice Wilson performs trying to stay aware of her body’s movement as her hands tremble from the weather. While her range of characters take hours to prepare, layering her clothes in in acrylic and covering her face in paint, these efforts don’t offer much protection from the elements.

“I get people asking me quite a bit if I just sleep in the makeup and then I’m ready to go the next day and it’s like no… it doesn’t work that way,” she tells upstart.

Like buskers, living statues don’t have the luxury of a captured crowd, like you would have in a circus tent. They instead must attract audience attention, despite their performances largely relying on stillness combined with some movement.

Clown and Mime teacher at the National Institute of Circus Arts (NICA) Ludwig Schukin says performers do this at first through piquing audience curiosity about their stillness and then by the statue’s subtle movements in response to the crowd.

Perhaps it will be a nod, or a slow gesture. Maybe a puff of dust and a flower in hand as is the case with the Stone Stockman, who is a long-time living statue performer in Melbourne. Schukin views these moments as the living statue’s opportunity to bring characterisation to a largely still performance.

Audience interaction is key. For example, professional British living statue Ed Johnson told The Guardian that it’s not remaining still that’s the most important thing, but what you do when you move.

“If you do something spectacular, it amazes people,” he says.

For Wilson, too, it’s the blend of utter stillness and action that shapes her performance.

“I’ll give them a moment or two to watch me being motionless and then I’ll come to life,” she says. In that moment of movement she will react in character to whatever the crowd are doing or saying, playing off them.

Clown and mime trainer Schukin describes this performance as the character operating within a framework in order to maintain the illusion. It’s structured improvisation, akin to jazz music he says. If a single instrument stands out in a solo, it doesn’t ruin the whole tune.

“That is a sort of framework, but you’re allowed to do whatever you want in the framework,” he says.

For a living statue action is just restricted to more sporadic or slight movements. However, disruptive viewers can make this a challenge. To maintain composure in these moments, Wilson used to respond in her character’s voice. For example, she stayed in character when performing as a pirate character by demanding payment.

But she also says she didn’t want to perpetuate the behaviour by making light of it. So, when a woman started circling her at an open street festival, she had to take a different approach.

After dark at this street festival, the girl circled Wilson saying, “I wonder what she would do if I stuck my finger in her ear”.

“Before I could even do anything, she gives me a wet willy,” Wilson says.

Wilson jumped off her stand and “went off on her”.

“I’m like, ‘that’s disgusting. I’m here to entertain you not to be assaulted’ and then she starts saying all these crazy threatening things to me,” she says.

Wilson tries not to react too extremely due to how it’s portrayed in the media when statues do. But it’s not unheard of. Violent reactions lead to headlines that only tell one side of the story. In 2013, a living statue punched a heckler due to disruptive behaviour. The headline read ‘Human statue punches heckler over ‘Wet Willie’’.

Wilson finds often it is women who behave in this way, even when speaking to both male and female performers.

“They think it’s okay because they’re a woman too,” she says, or with men it’s the idea that “they like it”.

For mime trainer Schukin says, the performance must end if the illusion is torn apart by someone. Because there are things you can and can’t do in character.

“You have to be finished your improvisation because it’s done. He’s ruining the whole thing. You have to pack and walk away,” he says.

For Wilson, the focus of her performances are not disruptive audience members, but kids that are mesmerised by the illusion or that come up for a hug, or parents who come up and say how their child is obsessed and they had to find her again.

“It makes you wonder what kind of lasting impression you’ve left on this child,” she says.

Kids often have the most extreme reactions to living statues. For example, 20-year-old living statue Mercan Dökmen told Hurriyet Daily News how a small child touched him as he performed as Legolas bowing from The Lord of the Rings.

“Then he screamed to his friends saying ‘this is real, run.’ Of course we cannot laugh or give any reactions, but such things make us very happy,” he says.

But a mesmerised adult who hasn’t lost their childlike sense of wonder is also fulfilling to Wilson. It’s these moments that make the cold rainy days worthwhile.

“Those kind of moments are absolutely magical.”

Article | Sam McNeill is a first-year journalism student in Media and Communications at La Trobe University. You can find him on Twitter @samsheretoo

Photo | Selective Focus Photography of Cowboy Holding Revolver Pistol Statue by Amaury Fernando available HERE and used under a Creative Commons licence. The photo has not been modified.